The story 'Windows is collapsing' raced around the Web last week, repeated across the echo chamber of the blogosphere. TechRepublic's Jason Hiner was at the event where this story originated and says that many people are drawing the wrong conclusion.

Last week, Gartner analysts Michael Silver and Neil McDonald gave a presentation called "Windows Is Collapsing: How What Comes Next Will Improve" on April 9 at the Gartner ITxpo in Las Vegas. Several journalists attended the session and reported on it, including ZDNet's Larry Dignan and Computerworld's Gregg Keizer.

I was also at the Gartner ITxpo. I didn't attend this session because I was also covering IBM Impact 2008 and ManageFusion last week, but there was very little buzz about the "Windows is Collapsing" presentation while I was at the Gartner event. There was far more buzz about it online once the stories from Dignan and Keizer hit the Web.

Larry and Greg each wrote a sane summary of the Gartner session, including the arguments against Microsoft's current approach with Windows Vista and the ways that the next version of Windows could be better (including Gartner's recommendations). The problem came when bloggers saw the headline "Windows is collapsing" and then started furiously repeating that as a fact that made it sound like Windows was about to fold like a house of cards any day now.

That's not what Silver and McDonald were saying, and it's not what Dignan or Keizer reported, or even concluded at the end of their reports. The real "Windows is collapsing" argument is that Windows Vista is big, slow, and clunky and is not versatile enough to thrive in a new world with a huge diversity of computer form factors and devices.

Specifically, the "collapsing" metaphor was aimed at the legacy code base in Windows and the fact that it makes the OS top-heavy and difficult to innovate. Silver and McDonald used the two slides below to tell the story. 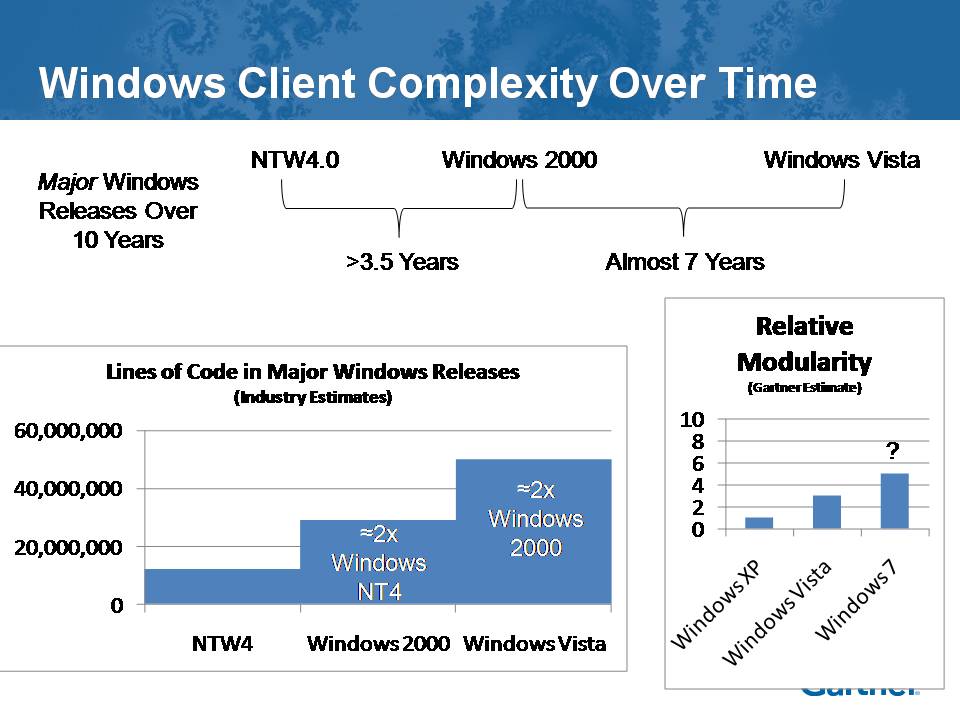 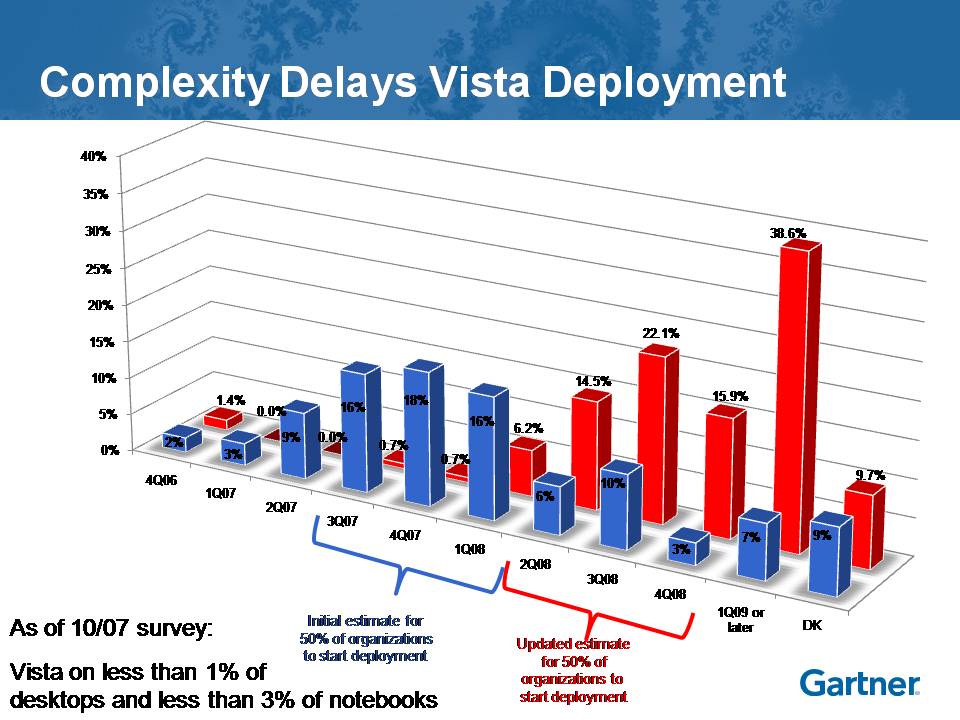 So the complexity of Windows Vista has finally tipped the balance and made Windows too difficult to work with and ill-suited to the versatile, mobile direction that computing is headed, Gartner believes. According the the second slide above, that has also directly resulted in the slow trickle of Vista deployments, even though many businesses have paid for the licenses.

The next version of Windows needs to be significantly streamlined, more virtualization-friendly, more licensing-friendly, and far more adaptable to different form factors. That was the conclusion. The conclusion was not that Windows was about to be swept away by Linux, a Google OS, or Mac OS X.

After all the craziness around this report last week, Dignan followed up with the article Windows is a glacier and glaciers don't melt overnight, and ZDNet's Microsoft pundit Mary Jo Foley chimed in with Reports of Windows' demise are greatly exaggerated.

The whole "Windows is collapsing" idea as it was passed around the blogosphere last week is a non-issue for IT departments. Windows isn't going anywhere any time soon, and I doubt that there will be any radical changes to Windows in 2008 that will make you want to re-think your current plans for desktop deployments or upgrades. However, IT leaders should join the call to Microsoft to make Windows simpler and more versatile, and, of course, you should always be looking at alternative options that could potentially make business sense.

Next Monday I will present my prediction for what Microsoft will do with the next version of Windows and when we can expect to see it.