In his keynote address at EMC World 2009 in Orlando, CEO Joe Tucci named "The Next Big Things in IT" as part of his vision for where EMC and the IT world are headed over the next few years. See which four things are at the top of Tucci's list.

In his keynote address at EMC World 2009 in Orlando, CEO Joe Tucci named "The Next Big Things in IT" as part of his vision for where both IT world and EMC as a company are headed over the next few years. 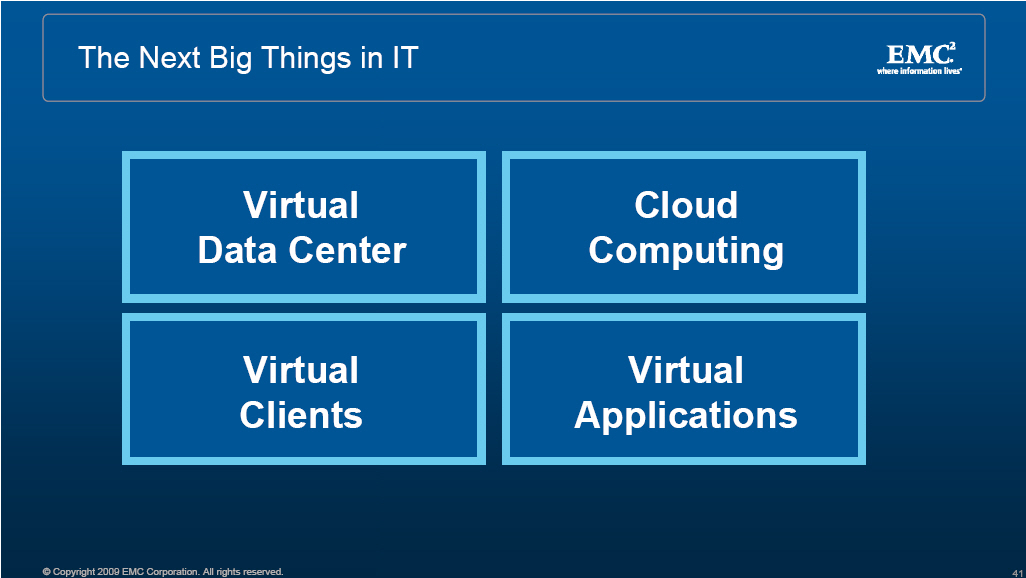 After the keynote, Tucci came to the press room and answered our questions for over an hour. As part of that conversation I was able to ask him about his four "next big things" and clarify a few points -- especially the difference between cloud computing and virtual applications, as EMC sees it.

Here's a summary of each of these four, in terms of how EMC is defining them:

EMC believes that all servers will be virtual servers, eventually. However, Tucci does not see everything moving to the cloud. When he talks about the virtual data center, he's talking about the on-premises data center.

And while Tucci sees the whole thing becoming virtualized, he acknowledges that while the transition is accelerating, it's still going to take years, even internally at EMC itself. "Our plan is to virtualize everything, but we're still a long way from that goal," said Tucci.

Cloud computing means different things to almost everyone that talks about, but the general idea is usually software and applications delivered over the Internet. However, when EMC talks about cloud computing, it's referring to the backend infrastructure that runs those apps.

Virtual Desktop Infrastructure (VDI) has been a hot topic on TechRepublic in 2009 because VDI is being evaluated by a lot of companies that are looking to simplify and reduce the cost of deploying and managing end user systems.

But, VDI is simply a thin client solution where a user's client system is a virtualized desktop that is delivered to an inexpensive, scaled-down piece of hardware the size of a cable modem. VMware's vision of the virtual client goes far beyond that. It is called VMware View and it includes VDI as well as user access to the virtual machine from a standard laptop or desktop. It also includes Thinapp for decoupling applications from the OS and a variety of management tools that allow IT departments to roll out, monitor, and manage virtual clients.

For the future, EMC's vision of a virtual application is a self-contained piece of software that is wrapped in its own minimal (virtually-unnoticeable) OS and delivered as a virtual workload that can easily move across various types of platforms. Naturally, this would hasten the trend of the operating system becoming less relevant to the average user.