Microsoft provided its first public demo of Windows 8 this week. The UI looked flashy, but Microsoft is still trying to marry tablets and desktops, and it could ruin the standard version of Windows this time.

Microsoft has given us a first taste of Windows 8. Unfortunately, while it has some attractive visual elements, Microsoft's approach shows that the company hasn't learned much from its product failures over the past decade.

My first impression is that there are two big problems with what Microsoft is doing in Windows 8, but there's also one change where the old software behemoth is on the right track. Take a look at Microsoft's first five-minute demo video of Windows 8 and then read my analysis below.

The video below was released on Wednesday evening to coincide with Windows President Steven Sinofsky offering the first public demo of Windows 8 at the All Things Digital conference (a.k.a. D9). In this video, Jensen Harris, director of program management for the Windows User Experience, provides a quick walk-through and promises that more video demos will be coming soon.

Alright, first for the positive. Microsoft is finally getting serious about multitouch, which users love for its simplicity. The new UI that it showed off at D9 and in the Web video obviously draws a lot of influence from Microsoft's recent work on Zune and Windows Phone 7. Although Microsoft says this new Windows 8 UI will be used for desktops, laptops, and tablets, the demo is on a 10-inch tablet and it's pretty clear that this is Microsoft's answer to the iPad, which has been doggedly eating into the sales of Windows PCs. The UI looks clean and self-evident, and it introduces some nice UI innovations for multitasking that a lot of tablet users will appreciate.

Microsoft has been doing touch interfaces for a long time. The original Windows CE (a.k.a. Windows Mobile) had basic touch. Microsoft Surface has sported advanced multitouch gestures and a multitouch UX. But, Microsoft has allowed Apple, Google, HTC, Samsung, and others to outflank them in winning over the masses to multitouch devices.

Think about this. At the D5 conference four years ago when Microsoft's Bill Gates and Apple's Steve Jobs shared the stage, both of them had forthcoming multitouch products to boast about. Jobs had the iPhone and Gates had Microsoft Surface -- and, at the time, the tech community was excited about both. The iPhone has sold over 90 million units since then, and spun off massive sales of the iPod Touch and the iPad as well. The Microsoft Surface is now available in a dozen bars in Las Vegas.

There are two big issues with what Microsoft is trying to do in Windows 8, although they both boil down to the fact that the company is still trying to be all things to all people, and as a result it's unlikely to make any of its customers fully happy.

First, let's talk about Microsoft's shotgun approach to product development in Windows 8. On Wednesday, Windows president Steven Sinofsky said, "It's 'no compromise' and that's really important to us."

When I hear "no compromise," it usually means "no discipline." Microsoft has always been afraid to offend any of its potential customers, so it typically piles tons of features on top of the existing codebase and ends up with a Frankenstein monster like Microsoft Office.

When I first heard about Microsoft's Windows 8 plans on Wednesday night, I posted on Twitter that my translation of "no compromise" was a lack of discipline. I got several great responses from tech professionals who agreed, but the best was from @dgackey, who wrote, "When you say 'no' to nothing, it usually means you know nothing about your market."

What Sinofsky is referring to when he says "no compromise" is that tablets running Windows 8 will run tablet apps, HTML5 apps, and traditional Windows apps, and that Windows 8 itself will run on both traditional PCs as well as tablets.

That leads me to the second big issue with Windows 8 -- it just might ruin the core Windows product that powers most of today's laptops and desktops. A touch-based UI focuses on large icons and images and imprecise actions (to accomodate different sized fingers). Meanwhile, a traditional UI for a standard mouse and keyboard has much smaller, more complex, and more precise actions and navigational elements. By forcing the tablet-focused Windows 8 UI on traditional Windows, Microsoft could end up removing much of the power and precision that most users rely on to do their daily work.

Microsoft would be much better off just creating a tablet OS, while continuing to tweak and innovate its desktop/laptop OS for users who demand the power, precision, and versatility they get from it. Sure, there will be a lot of users who only need a tablet, and there will be plenty of users who will want a tablet as their secondary computing device. But, declawing the standard version of Windows in order to better compete with the iPad is not the right answer. 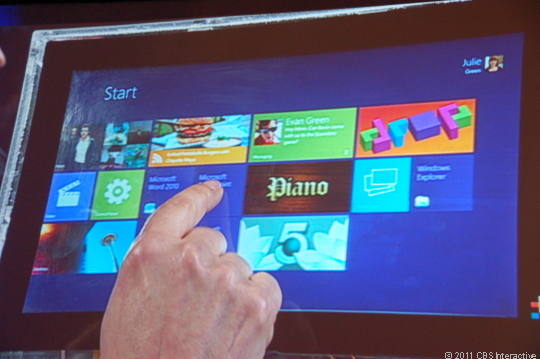