Much of the talk at CES 2010 involved reflections on the past decade. What will our reflections a decade from now sound like? Here are my predictions.

It's been fun to watch the quickening pace of innovation in the technology industry over the past decade. We've seen the rise of HDTV, the popularization of computers that fit into the palm of your hand (smartphones), the digitization of media to give users greater control over when and where they watch, listen, or read their favorite news and entertainment, and much, much more.

So, what will be talking about at CES a decade from now? There are some people who think there won't even be a CES ten years from now. I'm not one of them. The show might be smaller. It might have a slightly different name. It might even happen somewhere else besides Las Vegas. But I think there will continue to be a yearly technology convocation for many years to come.

As for what we'll be seeing and talking about a decade from now, here's what my crystal ball says:

One of the biggest false trends of CES 2010 was 3DTV. The problem: Users don't want to wear those goofy 3D glasses when they're sitting on the couch or laying in bed to watch TV or a movie. However, people don't mind wearing glasses when they are out in public. That's why we're likely to see a new generation of technology that will put computer displays into glasses and give users a visual layer of information about the world around them, offer customized alerts, and interact with their digital devices.

These glasses, which will integrate with prescription glasses or sunglasses in many cases, will be able to discreetly do things such as provide additional information about real-world locations (similar to Yelp Monocle), do facial recognition on people you meet and search your social network contact list to find them and display their name, grab the name of the song that's currently playing on your iPod, and show caller ID and text messages coming in from your mobile phone.

4. Keyboard and mouse stage a sit-in

Despite lots of new touchscreens and gesture-based UIs that we'll see in various forms at CES 2020, there will be one technology that stubbornly refuses to budge: the standard PC interface of keyboard and mouse. Its death has been prematurely predicted many times. After all, the two partners look remarkably prosaic sitting there next to sleek LCDs with their bright screens and touch-based controls. However, in 2020 (just as it is in 2010), when people are ready to sit down and do some serious work, they'll still be using a keyboard and mouse -- even if the future models are made out of touch-sensitive aluminum.

The next decade is going to feature some bloody platform battles in the digital content business. From TV to books to newspapers to movies, the distribution of digital content is going to see brutal turf wars and nimble new competitors who run circles around lumbering old institutions that try to hang on to outdated business models by walling off their assets into cute little gardens.

By 2020, most of this will have shaken out and there will be a handful of standard platforms. Most users will no longer have a newspaper subscription or a big cable TV bill (and thus, won't be paying for a lot of content they never use), but they will be making a lot more micropayments for their content. Most of them will ultimately pay less and the payments will happen behind the scenes. Users will simply "check their balance" like cellular minutes. The biggest benefit will be that content will be portable across all of the different screens a user interacts with throughout the day. You'll be able to start to read an article or watch a show on one device and then seemlessly pick it up on another as you move throughout your day.

In 2020, all of this is going to be far simpler, and in some cases less necessary. We won't be talking about syncing. We'll be talking about ways to improve and extend the user-centric computing model. In this new model, your computing preferences, software, and data will follow you wherever you go, no matter which computer or device you use, and no matter which screen size or backend platform you're using. You'll have your choice of which provider you want to use to store and manage your data and preferences and all of them will come with about five free terabytes of data, and after that you'll have to pay a little extra. CES 2020 will be showing off new applications and devices that plug into that framework. 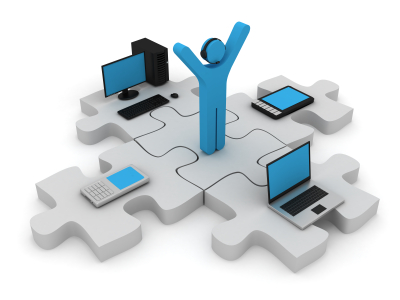 Currently, the biggest spectacle of CES is the flat-panel TVs. The biggest booths -- Samsung, LG, Sony, etc. -- are overloaded with massive numbers of high definition TV panels. At CES 2020, there will be no TVs on display.

Instead, these TVs will be replaced by OLED panels that are roughly the thickness of a sheet of vellum. The screen will be virtually transparent and will have a miniature chip in one corner that wirelessly connects to any nearby peripherals and content sources in a process similar to paring a bluetooth headset.

What Samsung and Sony will be talking about at CES 2020 is how these new screens can be elegantly integrated into various types of walls or picture frames so that they fuse into the natural decor of your home. Of course, Panasonic will be showing off a 240-inch OLED screen that can cover an entire wall of your great room and people like myself will write, "Why would I want to do that?" To which, Panasonic and TechRepublic members will respond, "Because you can!"

So, the more things change ...

What tech innovations do you expect over the next decade? Join the discussion below.