The Internet has had a powerful democratizing effect on modern society, and it's far from finished in reshaping industries. Here are the next four.

Editor's note: This article was originally published on September 6, 2011. It is being republished as part of our 2011 year-end round-up since it was one of the most discussed articles of the year. 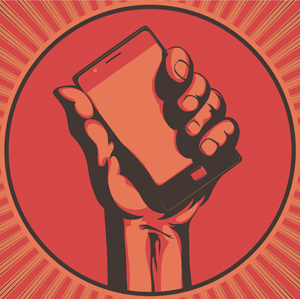 It's been 15 years since the Internet became a mainstream phenomenon and began revolutionizing modern life in so many different ways -- from how we find information to how we communicate with other people to how we consume news to to how we buy books and music to how we find a compatible life partner. Along the way, the Internet has completely upended entire industries, killing off or reducing many of the existing power brokers, removing the middle men, and ushering in new leaders -- the digital powerhouses of the 21st century.

Still, it's easy to forget that, from a broader perspective, we're only in the second or third inning of the Internet. There's a lot of transformation that's waiting to happen in the years ahead. In the same way that the Internet has unleashed sweeping changes in newspapers and magazines, music sales, and book sales, there are entire industries that have been only lightly touched so far but are destined to be caught in the eye of the storm eventually. Here are four of them.

The movie industry has been under intense pressure over the past decade as large-screen television sets have come down in price and high definition movies have made the home experience feel more and more like a small movie theater. However, the movie industry has been through this before. The arrival of the television, the VCR, and the DVD were all predicted to kill the movie theater at one point or another, but it never happened for two reasons -- 1.) Going to a movie is an experience where people purposefully want to get out of the house, and 2.) The most anticipated films still show up in the theaters months before they come to pay-per-view, disc, and premium channels. The latter is the most important reason why movie theaters still have such a strong business. It's all about controlling distribution of the content. That's likely to change soon. Hollywood is experimenting with the idea of selling movies directly to consumers at home (streamed over the Internet) at the same time the movies arrive in theaters. Of course, movie studios will charge a higher fee (possibly $30). But, since many families already pay $50 or more to go to the movies and others would rather save time and watch it in the comfort of their own homes, there is definitely consumer demand for direct delivery. Thirty dollars may be too high, but this will happen eventually, and it will likely result in more people watching movies from home than traveling to a theater. Theaters won't go away, but they will likely decrease in number and turn into much more of a premium experience.

It's pretty embarrassing that in 2011 we're still talking about automating healthcare. It's an industry that thrives on the latest scientific research and cutting edge equipment to improve people's health, but can't adequately transfer patient information between healthcare providers and remains snowed under an avalanche of inefficient paperwork that drives up costs and wastes time -- at least that's the case in the U.S. However, the U.S. government is trying to push for an electronic medical record (EMR) for everyone in the U.S. by 2014. Although this latest push has already been over two years in the making, the details are still working themselves out and there are some legitimate concerns about it. Nevertheless, the move to electronic medical records -- and a portable EMR that the patient (not the healthcare provider) controls -- is long overdue. And, when it happens, it will not only shift the investment in healthcare dollars away from old processes and products and into a lot more IT systems, but it also has the potential to give patients more ownership of their own healthcare experience, which could have unforeseen consequences for pricing, provider choice, and provider accountability. In short, this is a major industry game-changer waiting to happen, and not just in the ways that the politicians are yapping about (see: Memo to the health care industry: The jig is up).

Amazon has completely changed the way most people buy books, and it's done it in two ways. First, it made it fast and easy to buy books online, and at a huge discount. Because of Amazon, book-buying was one of the first things people become comfortable purchasing over the Internet. A big part of that was because Amazon offered deep discounts like the big chain stores, Barnes & Noble and Borders, but carried a much larger selection of obscure titles like many of the independent booksellers. Second, Amazon's Kindle has popularized e-books, which takes the process of delivering paper goods completely out of the equation. Instead, the Kindle delivers electronic files over the Internet to an e-reader, tablet, or smartphone. While this has been a revolution for consumers, the Internet has done very little to revolutionize the publishing process for books. It is still ruled by publishing houses, who serve as the gatekeepers and filters for what gets published and decide which titles deserve the most promotion (and potential sales). However, just as it did for news publishing, the Internet is about to completely democratize the publishing process for books. The combination of e-readers, electronic audiobooks, and print-on-demand have lowered the barriers to entry and made it so that authors no longer need publishing houses. They can take their work straight to the masses -- or, more accurately, straight to their niche audiences, in most cases. This completely changes the economics of book publishing for an author by making it very profitable to sell only 5,000-10,000 books. In the old publishing world, that's about the average for most books and the author makes hardly any money and the publishing house considers it unsuccessful (the big titles are responsible for most of the sales and most of the payments for authors). In the new Internet world, there are going to be a lot more books published (as e-books) and lot more titles to sort through, but it's also going to become a much more democratic process and there will be room for more people to make a living as niche authors. The traditional publishers will morph into promotional agents for the really big titles.

It's not that financial transactions have been completely unaffected by the Internet. Stock trading has been totally revolutionized. PayPal and eBay have had a major impact on the peer-to-peer exchange of goods between people and how they pay each other for them. Most people now use online banking to track their accounts, and a lot of them use it to pay their bills. However, the way most people pay for stuff have been largely untouched by the Internet. Most of us still carry a wallet full of plastic cards with magnetic strips in order to connect with a merchant and tell it which account to draw from in order to pay for a purchase. That's about to change, thanks to a combination of smartphones and the mobile Internet. In what is sometimes called the "electronic wallet" or "digital wallet," consumers will soon be able to carry all of their accounts as digital tokens in their smartphones and then interface with a merchant to verify identity (with two-factor authentication) and choose which account to pay from. There are lots of systems and standards that are competing for a way to make this work. Near Field Communications (NFC) is a technology that is designed for this, but it requires new chips that would have to be integrated into all future smartphones. Visa is running digital wallet trials, but they'll want to take their traditional cut of the action. I have to think that both merchants and consumers will look for a way to cut Visa (as well as Mastercard and American Express) out of the picture and find a standard transaction system that can work using existing smartphones, which now make up 40% of all cellphones in the U.S. (and an even higher percentage in parts of Europe and Asia). This phenomenon will also make it easier for small businesses to quickly and inexpensively go into business and be able to accept payments. So again, this is the Internet having another democratizing effect on modern society.

What other industries are still waiting to be transformed by the Internet? Post your picks in the discussion below.