While most companies are rushing to outsource as much of their IT as possible, GE just made a huge investment in its IT operations with one of the world's state-of-the-art data centers.

At a time when more and more companies are rethinking IT and considering how much of their data center they can outsource to the cloud, General Electric is going 180 degrees in the opposite direction. On Thursday, GE unveiled its new state-of-the-art "green" data center on the same site in where the world's first commercial computer was deployed in 1954.

The new data center was conceived and architected by GE's internal IT department (along with a few strategic partners) at GE Appliances & Lighting in Louisville, Kentucky. The data center itself is located within the massive complex known as "GE Appliance Park." Interestingly enough, the site has a distinguished history for IT innovation. In 1954, the Louisville GE complex became home to the first UNIVAC computer that was deployed in a private business. Before that UNIVAC at GE in Louisville, all computers had been part of government projects. That first UNIVAC was used to run a single business application: employee payroll.

GE's 2011 data center is also breaking new ground in IT. It is one of the world's first data centers to achieve LEED Platinum Certification. LEED is for Leadership in Energy and Environmental Design and it is awarded by the U.S. Green Building Council for projects that go above and beyond standard building codes to create sustainable, energy-efficient buildings. It's tough to get the basic LEED certification, and only 6% of all LEED buildings achieve the Platinum certification.

"We have a long, long history of firsts," said Alan Kocsi, CIO of GE Appliances & Lighting.

There were a number of things GE did to land the LEED Platinum mark:

However, the new GE data center isn't just about saving energy, going green, and reducing the power bill. It also has to power the aggressive goals that GE Appliances and Lighting has made to expand its U.S. manufacturing operations in the years ahead. As such, the new data center provides four times the capacity of the previous data center.

The company needs all of that computing power to support a $1 billion investment that it's making to upgrade its appliance product line and create "Manufacturing Centers of Excellence" in the U.S. that will create 1,300 new U.S. manufacturing jobs by 2014. That includes 400 jobs that are being transferred from China to GE Appliance Park in Louisville in 2012 to build energy-efficient water heaters.

The IT to power this investment in appliance manufacturing in the U.S. will be run out of the new Louisville data center, which will also power the work of 27,000 employees in over 100 countries who all work for the GE Appliances & Lighting division.

"This is a historic day for GE Appliance Park," said Jim Campbell, CEO of GE Appliances & Lighting. "It wouldn't make sense to invest a billion dollars without putting some of that money into IT."

Louisville Mayor Greg Fischer said, "This could have easily been outsourced." He praised GE for making an investment in American manufacturing and using U.S. technology to build a a data center that will deliver "state of the art data to make state of the art decisions."

Fischer also thinks middle America can land a lot more of these types of deals. "In this part of the country, we've got a competitive advantage for advanced manufacturing," he said.

That jives with the message that GE CEO and Chairman Jeff Immelt has been telling anyone who will listen across the United States for the past couple years. Immelt has been preaching "American Renewal" through a focus on innovation and investment in R&D and manufacturing. Below is one of GE's ads that it has been running to promote Immelt's vision.

As for the Louisville data center itself, it is a Tier 3 data center (98 minutes of down time per year) with all of the latest bells and whistles, including:

Chet Guess, COO of GE Appliances & Lighting, said, "This data center is a real investment in our future. Built for high-density computing with the use of virtualization, this new data center will give us more than four times the capacity of our old data center. This will give us the flexibility to radically adapt and change to new market requirements and customer needs. This will give us a 25-plus year trajectory of growth in this business... This new data center will house Enterprise Resource Planning [ERP] systems that will help GE implement lean manufacturing processes to improve operational efficiencies, to drive cost down, to improve customer service through better fill rates and billing systems... What I'm most proud of is the successful completion of a $48 million project that was an investment in this team, this business, and this community. And, I'm proud of the manner in which we achieved it. As you look at LEED certification, of all the buildings that implement LEED certification in this world, only 6% of those buildings achieve Platinum certification and we're one of them. That's a true testament to GE's commitment to this team and business, and also to its environmental stewardship." 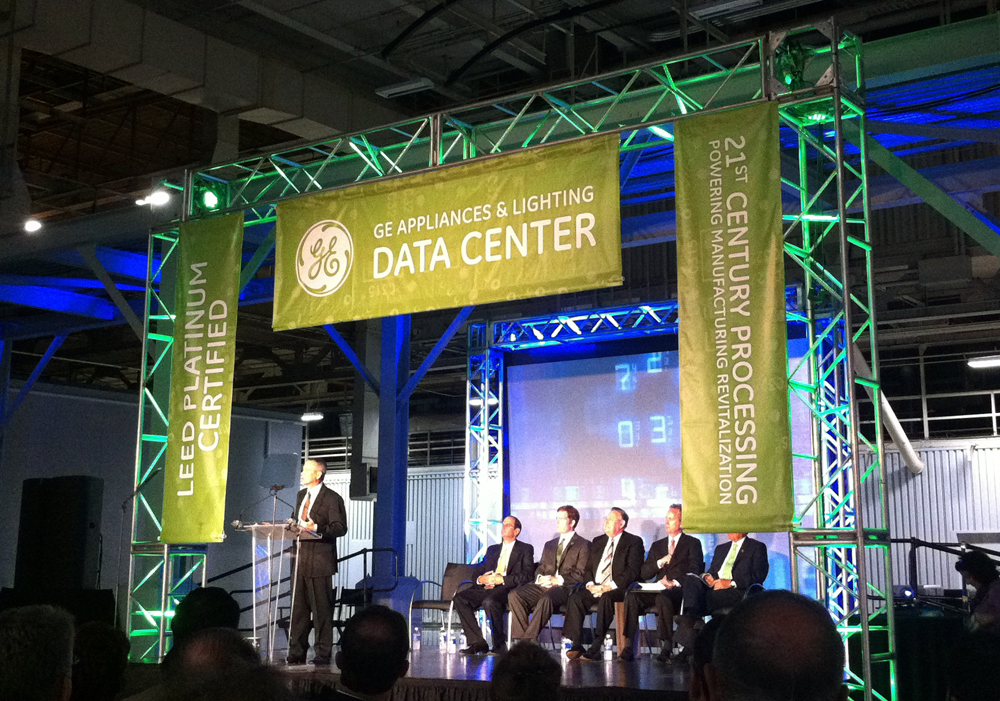