Spotty OS updates have been one of Android's sore spots. Google wants to fix it with a new Android consortium. Get the details and the latest updates on the Android ecosystem from Google I/O 2011.

If you've been waiting for months on an OS update to your Android device, you may soon get some relief thanks to a new Android consortium that Google announced on Tuesday at its Google I/O 2011 event in San Francisco.

One of the worst parts about being in the Android ecosystem is the lag in OS updates. As I wrote in my piece The dirty little secret about Google Android, the Android platform is largely controlled and dominated by the smartphone manufacturers and wireless carriers -- and not Google. And, those powers-that-be -- particularly the wireless carriers -- have shown little interest in pushing out Android software updates on a timely basis. Why should they? From their perspective, once they sell the phone, it's time to start collecting revenue from the customer and any additional resources they spend on a device cuts into their profit. That's why only 4% of Android devices have the latest version of Android, Gingerbread, which was released five months ago.

Google is finally doing something to fix the situation. As part of a flurry of Android announcements during the opening keynote of Google I/O, the company announced that it has established a new consortium of Android partners who will be collaborating on setting standards for deploying Android updates. The initial members of the consortium include all four of the big US wireless carriers (Verizon, AT&T, T-Mobile, and Spint) as well as all of the leading Android device manufacturers -- HTC, Motorola, Samsung, LG, and Sony Ericsson. Google has also opened the door for other partners (and future Android partners) to participate as well. 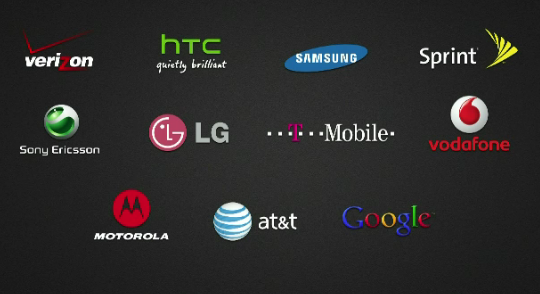 Here's what Google said in its official post about the news:

"The Android ecosystem has been moving really fast over the last two and a half years and rapid iteration on new and highly-requested features has been a driving force behind Android's success. But of course that innovation only matters if it reaches consumers. So today we're announcing that a founding team of industry leaders, including many from the Open Handset Alliance, are working together to adopt guidelines for how quickly devices are updated after a new platform release, and also for how long they will continue to be updated. The founding partners are Verizon, HTC, Samsung, Sprint, Sony Ericsson, LG, T-Mobile, Vodafone, Motorola and AT&T, and we welcome others to join us. To start, we're jointly announcing that new devices from participating partners will receive the latest Android platform upgrades for 18 months after the device is first released, as long as the hardware allows... and that's just the beginning."

So, the only official news from the new Android consortium is that they've agree that all new devices from consortium members will receive Android updates for 18 months from the time the device is released (unless the hardware can no longer handle the latest Android software). That sounds great, except that some devices are on the market for as long as a year, so by the time a consumer buys a device it may only have six months of updates left.

When Andy Rubin, Google's Android chief, was asked when consumers would start to see a more unified Android update schedule, he said that he didn't "have the answers right now." He stressed that getting all of the Android partners gathered around the same table was simply the first step.

During the Google I/O opening keynote, the company also gave a variety of updates on the state of the Android ecosystem:

Google also made a variety of new announcements about Android: