We wrote about how battery life is one of the most important fixes needed in the iPhone 4, see how much Apple is promising compared to the iPhone 3G and iPhone 3GS.

Leading up to the iPhone 4 unveiling at WWDC 2010, I wrote that battery life was the most important thing Apple needed to fix in the iPhone. As we'd hoped, Apple announced that it was putting a larger battery inside the fourth generation iPhone and that the new device would be running on Apple's new A4 processor, allowing the company to squeeze out greater power efficiency between the hardware and the software.

Jobs even paid lip service to both issues in his keynote. He said, "Because we’ve made the battery bigger and the A4 is so good with power management, we’ve improved the battery life."

Another thing Apple is doing with the iPhone 4 that could improve battery life is integrating the wireless antennas into the new metal side plates. If this works as designed, it could improve wireless signal quality, which would cause less battery drain because when mobile phones don't have a strong signal they try to boost it by pushing more power to the radios. 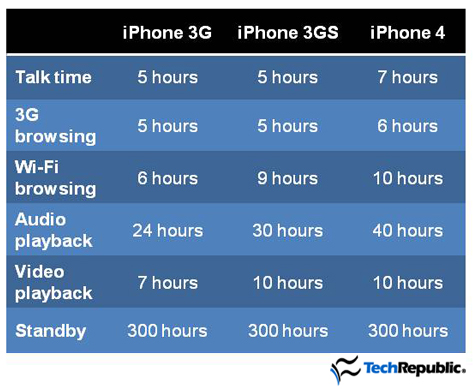 If it's any consolation, the hardware analysis site AnandTech said, "Apple's battery life estimates have been ridiculously accurate over the past couple of years. I swear Apple must have my office bugged because my battery life numbers almost always equal theirs and they have no access to my test files."

I'm not quite as confident in Apple's numbers because they are often taken in a vacuum (the audio playback number is only true of you turn off all the wireless radios and just use the iPhone as an iPod). Nevertheless, I agree with AnandTech that Apple's numbers tend not to be as wildly exaggerated as some battery life suggestions we see for other laptops and smartphones.

That means that these numbers are probably fairly accurate, and that the iPhone 4's net gain in battery life will likely not be very significant.