The American Management Association has estimated that about half of all U.S. employers have policies restricting workers from visiting social networking sites. A new TechRepublic poll conducted during the first half of July indicates that the number is even higher.

Since the TechRepublic audience consists primarily of IT professionals, this poll reflect mostly enterprises and SMBs large enough to hire an IT specialist. 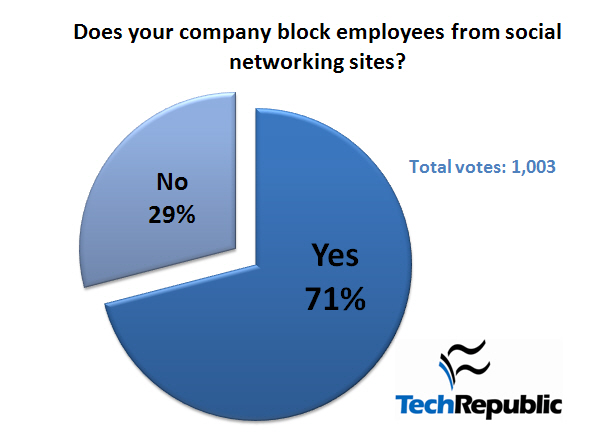 This issue is becoming a growing source of tension between IT and users, especially new college grads who are entering the workplace and expecting to use sites like Facebook to network and connect with people, but are being blocked. The Associated Press shed light on this issue in its recent piece Young workers push employers for wider Web access.

Also, a policy that is too stringent can actually inhibit users from doing their jobs, including IT workers. TechRepublic member Juanita Marquez explained how her company's policy has caused her problems:

All but LinkedIn are blocked - and that is only allowed because the company owners use it. The blocking at my company is so draconian in order to keep the assistants from surfing, playing games, reading blogs, streaming videos or music ... that I have difficulty finding job-related, pertinent IT information on blogs for fixes I need ... In one case, I'd posted some technical humor to our IT newsletter only to find the next month that the site for the article had been blocked! And then there was the time I was completing an IT survey and all went well until the final page, which was blocked.

Some companies have different standards for different classes of employees. TechRepublic member david.valdez reported, "Social networking (myspace, facebook, etc.) is blocked generally, but then there is the class of employee (owner, GM, IT) where we only bock adults sites, hate sites, and gambling, and not always the latter, even. I've tried to convince management that MBWA (management by walking around) is far better and more useful than tech, but that's a whole different discussion."

TechRepublic member egermain argued that the rationale of blocking social networking to boost employee productivity is flawed. "People do not suddenly become more productive when they lose access to a social networking site," he wrote. "Employees wasting time online is the fruit of the issue, not the problem itself. An unmotivated employee will find another way to waste time. Security is a good reason to use controls. Productivity management is not."

Part of the answer might be smarter software. Companies such as Palo Alto Networks are now making firewalls and filtering appliances that give IT much more granular control. For example, a company can allow users to go to Facebook or Flickr but prevent them from uploading files, in order to protect company data.

To read more of the comments and responses to this issue from TechRepublic members, go to the discussion thread from the original poll.