TechRepublic's mock election for "President of the Internet" has concluded and the winner with over 40% of the vote is veteran technology commentator Leo Laporte. See the full election results.

TechRepublic's mock election for "President of the Internet" has concluded and the winner with over 40% of the vote, and a decisive victory margin of over nine percentage points, is veteran technology commentator Leo Laporte. Here are the official results: 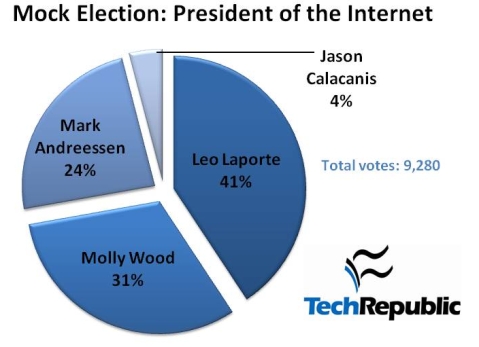 Second place finisher Molly Wood closed a lot of ground in the final days of the election. At the mid-point of the election, she was a distant second, trailing Laporte by over 25 percentage points. However, her fans rallied to her support. One fan produced a campaign Web site for Molly and others produced YouTube videos showing their support. That enabled her to close Laporte's final victory margin to single digits (9.2%).

The leading vote-getter among the write-in candidates with 32 votes was Tim Berners-Lee, the MIT professor who is most often credited with founding the World Wide Web and remains one of the preeminent thought-leaders for both the Internet and the Web.

Of course, now the question is, "If Leo Laporte were actually elected President of the Internet, what would his cabinet look like?" Look for more on that issue over the next week.