Nortel is positioning itself up as a "green" networking vendor that has the right history and products to take market share from Cisco Systems, and Nortel has a new research study and a group of converted customers that it's using to help spread the message.

Nortel is positioning itself up as a "green" networking vendor that has the right history and products to take market share from Cisco Systems, and Nortel has a new research study and a group of converted customers that it's using to help spread the message.

Let's take a look at why Nortel, which has traditionally focused on equipment for big telecoms, thinks it has the LAN products to take market share from Cisco, the story behind its aggressive new marketing campaign, and a quick gut-check on Nortel's claims from an independent analyst.

There were lots of bold marketing claims being made at Interop Las Vegas 2008 at the beginning of May, but perhaps the boldest was Nortel's assertion that its LAN gear was vastly superior to Cisco's competing products -- which have dominated the market for the past two decades. How superior? Nortel claimed that its LAN switches are faster, more resilient, less expensive, and consumed half as much energy. And Nortel spent a lot of marketing money to make sure every attendee at Interop got the message.

Normally, I wouldn't even bother repeating a bunch of trumped-up marketing claims, but in this case Nortel brought some third party research (this report from the Tolly Group) to attempt to support its claims. The company also handed me with a list of over 50 testimonial quotes from customers who had recently switched to Nortel (mostly Cisco converts). And, since a lot of attendees at Interop were talking about Nortel's aggressive tactics, I decided to follow the smoke and see if there was any fire. 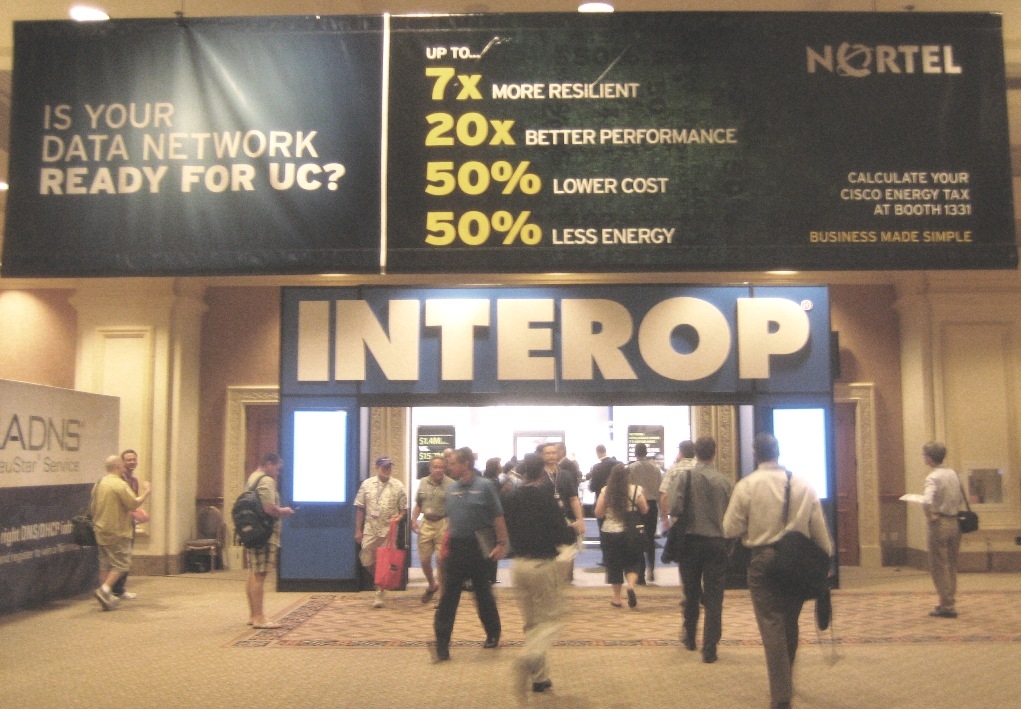 Nortel announced its bold claims on this banner, hung in front of the entrance to the Interop Las Vegas 2008 expo hall. For pictures of Nortel's booth and the cards that it inserted in all attendee badges, see full photo gallery. Photo credit: Jason Hiner

Joel Hackney, President of Nortel Enterprise Solutions, regularly talks to corporate CIOs to ask them about their top priorities and what they need to improve their businesses. Over the past year, Hackney has noticed several items that bubble up to the top of the priority list for most of the CIOs he's talked to:

As a result, Nortel built its networking product line around a couple big priorities: energy efficiency and unified communications (UC). With cost, environmental, and (looming) political pressure building around energy efficiency, that's a no-brainer. In terms of unified communications, Nortel sees that as an emerging driver of infrastructure decision-making. It's also something that can easily be tied to improving the business.

"UC is the intersection of communications and business processes," said Hackney. Thus, Nortel has is pitching its LAN gear as "purpose-built for UC."

One of Nortel's biggest problems is that a lot of businesses still don't think of them as a major player in the LAN networking space so they often aren't even considered for a lot of the world's largest and most critical networking deployments and contracts. However, Hackney said, "When we get a chance to bid, we win at a high percentage."

He cited the Mumbai Airport and 2010 Olympic Games in Vancouver as two recent wins. The 2010 Olympics will be the first all-IP Olympics (including some IPTV) and Nortel won the bid to do the network from end-to-end.

Hackney confirmed that Nortel has staked out the enterprise networking market as a major opportunity for growth, and they are making a big bet on it to help them turn around their struggling financials -- Nortel lost $138 million last quarter. Here are few quotes from Hackney that reveal Nortel's perspective on the networking market:

Of the testimonials from customers who have switched to Nortel during the past year, this one from Michael Firsdon, Network Engineering Team Lead at the University of Toledo is a good representative of what these customers have said:

"Nortel formulated an all-encompassing custom package for the University that included staff training, project management assistance and ongoing support arrangements. These extras put Nortel well above its competitors and made us very comfortable with our decision. Another factor included costs savings on electrical consumption alone. This, combined with ease of configuration, time tested resiliency capabilities, and absence of code security issues commonly found in other vendor products provided a compelling case for making a switch from the University's incumbent vendor."

Story behind the marketing campaign

At Interop's Energy Camp I also ran into April Dunford, who is Nortel's "Green" guru in the marketing department. She said that Nortel has created a Global Green Council that includes marketing, operations, and facilities. They have taken on green initiatives as a major marketing and promotional push for the company. They want to be seen publicly as a "Green company" by adopting internal policies and building energy-efficiency into their products.

Simultaneously, in recent years when Nortel decided to make a strategic push into LAN networking, the executives told the staff to go out and find something that they do better than Cisco. One of the sales engineers had a customer who remarked that Nortel's gear sucks a lot less power than Cisco equipment. The sales engineer took that information back to the company, which started testing this in its labs and quickly verified it to be true. Next, they commissioned Tolly Group to do a lab study and Tolly came up with similar results.

The trend that Nortel has on its side is that the company grew up as a telecom vendor serving phone companies, which had strict power consumption guidelines. As a result, Nortel has always had a disciplined approach to power when developing products and that approach spilled over into its LAN networking gear when Nortel moved into that market.

Conversely, Cisco has always been an IT company, and since IT professionals rarely ever see the electric bill -- although that's starting to change -- Cisco always had a blank check to use as much electricity as it needed to power its switches and routers. Thus, Cisco never really needed to be disciplined in its approach to power when designing its products.

The IT market has changed. Energy efficiency is becoming a top priority for many businesses and IT departments are becoming one of the key stewards of that change. Nortel wants to capitalize on that.

To get another opinion on Nortel's plans and its claims, I turned to Gartner analyst Mark Fabbi because he spends a lot more time than I do watching and evaluating the networking sector. Here are several quotes from Mark on Nortel and its strategy of taking market share from Cisco.

"From currently published specs it is completely impossible to make informed comparisons of power utilization. There are a lot of good things I've seen with Nortel’s work in this area. There clearly are differences between vendors and it appears as if Nortel has valid claims and differentiation for at least some of their product areas. There can be a number of reasons why power utilization is lower – it could have been a real focus in the design phase, the vendor may have really good discipline and skill in optimizing design and manufacturing considerations resulting in power savings, the product may provide fewer features (though still meeting market needs) than a fairly comparable product."

"We're certainly seeing enterprises considering and buying other networking technology besides Cisco. The major beneficiaries are HP ProCurve, Nortel and Foundry. However, overall Cisco's market share losses are fairly small – though we have seen a gradual erosion of the market share over a number of years. Based on number of ports sold into business Cisco's share has dropped from the low to mid 60% range in 2002/2003 to the low to mid 50% range in 2006/07. Cisco still clearly defines the market, but if you look at 2007 compared with 2006, Cisco's LAN revenues grew by 12%. HP ProCurve (+40%) , Huawei (+32%), Foundry (+26%) , Nortel (+18%), Alcatel-Lucent (+17%), Enterasys (+17%) and Force10 (+15%) all grew at (slightly) faster rates.

"From talking to 100s of enterprise clients the biggest shift in the last couple years is that organizations are starting to question their automatic loyalty to Cisco. Clearly there are still lots of organizations that still remain completely beholden to Cisco and Cisco clearly relies on this to fuel their profits; however more are questioning their approach. In North America this is in striking contrast to what happened in the last economic downturn (2001/2002) where there was a rapid flight to safety and Cisco increased their market share quite dramatically."

Why Cisco may be vulnerable

"Cisco treats their core markets like a cash cow – and they do generate massive profits. However, their customers are starting to question whether Cisco's price premium is worth it. If you look at many of their high run-rate products you will find that Cisco no longer lowers prices over time. Often when new products come out in the same family that command even higher premiums (good examples are the 3750E, 3560E series). The rest of the industry continues to ride down the natural technology price curve meaning that if you don't force Cisco into competing you pay an increasing premium compared to others.

"When I used to criticize Cisco for their high prices and premium price, they would respond with a list of products and modules where they lowered the price. They no longer do that. What they are counting on is that there is a large group of customers that will just automatically pay the going rate – and as time goes on this means ever increasing margins (and profits) for Cisco. When customers get smart enough to challenge Cisco, they will respond with deeper discounts in an attempt to ward off competition. Sometimes this works, sometimes not."

"What I like most about [the Tolly Report] is that we are now seeing vendors like Nortel (and some others) get much more aggressive about challenging Cisco. The more this happens, the healthier the market dynamics will become and the industry and end user organizations will benefit."

Nortel is making bold claims about the cost, performance, and energy efficiency benefits that companies can get if they switch their LAN infrastructure to Nortel gear. The performance gains are debatable, but cost and energy efficiency gains can be legitimate. If you rely on Cisco networking gear and have a big contract with Cisco, you should at least get a competing bid from a reliable vendor like Nortel or Hewlett-Packard every couple years to see if there is an opportunity for some significant savings for your business. If nothing else, you can use these bids to help keep Cisco honest on cost.