A recent TechRepublic poll showed that only 24% of organizations are predominantly using Microsoft Office 2007. See which versions they are using.

One of the jokes in the IT industry is that the biggest competition for Microsoft Office is previous versions of Microsoft Office. A recent TechRepublic poll confirms the truth that most IT departments are laggards in upgrading to the latest version of Office.

A lot of IT departments tend to upgrade and then skip the next version of Office in order to save resources in both licensing costs as well as support and training costs. It appears that a lot of them have skipped Office 2007 (which was released in tandem with Windows Vista in January 2007), as only 24% of the IT professionals who responded to the poll reported that Office 2007 was their organizations' predominant version of Office.

That's not very surprising since Office is such a mature product and Office 2007 included a significant interface change -- the Ribbon -- which has been disruptive to many business users. The most surprising thing about this poll was that 58% of organizations are predominantly using Office 2003 and only 15% are stuck mostly on Office XP (released in concert with Windows XP in 2001) or earlier.

The big question now, of course, is whether that large group that skipped Office 2007 will be ripe and ready to upgrade to Office 2010 next year, or if the Microsoft Office upgrade train has stalled in the station and is in danger of eventually being replaced by simpler alternatives such as Google Apps and Zoho over the next 3-5 years. 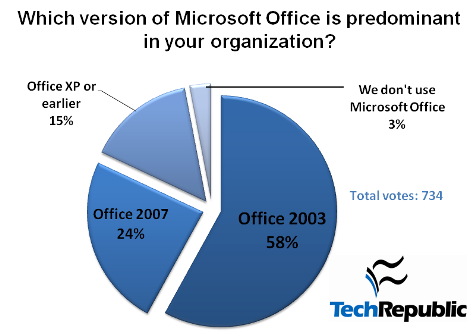