Eric Schmidt got knocked around pretty badly by Microsoft during his tenures at Sun Microsystems and Novell. But, in his leadership of Google, Schmidt now appears to have successfully turned the tables on Bill Gates and Steve Ballmer, who are scrambling for ways to catch up.

When Eric Schmidt left his job as the chairman and CEO of Novell to become the top executive at Google in 2001 he privately told journalist John Battelle that one of the things he was looking forward to was no longer competing with Microsoft.

Bill Gates and Steve Ballmer badly trounced Novell during Schmidt's four-year stay (1997-2001) at the Provo, Utah software company. And before that, Microsoft siphoned off server revenue from Sun Microsystems during Schmidt's tenure as Sun CTO from 1994-1997. From those experiences, Schmidt knew that Microsoft played hardball and occasionally played fast and loose with silly little details like anti-trust laws and government regulations. 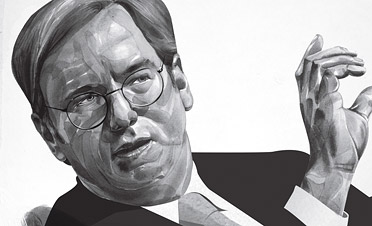 Schmidt came out of his stints at Sun and Novell battered and bruised by Microsoft. He had no desire to go toe-to-toe with Gates and Ballmer again. Taking a job at an Internet search engine -- which was growing rapidly but still struggling for an idea of how to make money -- hardly looked like a company that would compete with Microsoft in its core businesses.

What a difference seven years makes.

Under Schmidt's leadership, Google has figured out how to make money, lots of it -- $5.19 billion in revenue in its most recent quarter. The vast majority of that money comes from its search ads business, but Google has also forayed into the applications business. And now the combination of applications and search ads has Microsoft spooked.

While Google Apps have thus far done very little to erode the market share of Microsoft Office, the conventional wisdom in the IT industry is that software-as-a-serve (SaaS) such as Google Apps is where the market is moving, and that the owners of tomorrow are planting their stakes in the ground right now.

Google is very well positioned. It already has hundreds of millions of online users. It has the software and hardware infrastructure to handle SaaS and it has the strongest and most trusted brand name on the Web. No one understands this better than Microsoft. That's why Ballmer swung for the fences and tried to acquire Yahoo.

The collapse of the Microsoft-Yahoo deal has one big winner: Google. It also has two big losers: Yahoo and Ballmer. Yahoo will have a very difficult time creating the amount of value for its shareholders that Microsoft was offering. Ballmer swung for the fences and whiffed in this deal. He'll fight on, but the fact that he went after Yahoo was a de facto admission that he does not have much faith in his troops to take on Google alone.

While I doubt that the combination of Microsoft and Yahoo would have done much to stop Google's momentum on the Web, it's clear that neither of the two companies have shown the ability to innovate or execute on a broadly successful Web search strategy. And until someone can find a way to compete with Google on search -- the primary method most people use to approach the Internet -- Google's growth and momentum will continue unchecked. And one day soon Google will transfer a lot of those users to its online applications en mass. It's already started with Gmail, and to a lesser extent, Google Apps. Nearly everyone in the technology sector sees it coming, even Microsoft. And even Google itself.

Google knows that it has the potential to become as large and as powerful as Microsoft. It knows that it is on course to become the next Microsoft -- potentially even bigger and more powerful when you consider the fact that it could soon control the largest compilation of information ever gathered in human history.

Google's entire culture of "Don't be evil" is a direct reaction to Microsoft, which Google believes did become evil once it got big and powerful and began wielding its influence to crush smaller competitors, upstarts, and companies that didn't cooperate with Microsoft's vision of the tech sector. Schmidt recently commented on this in an interview for Portfolio magazine:

"We had a debate about this a while ago, and it had nothing to do with Yahoo. The question was how to prevent what happened at Microsoft from happening at Google. Consumers have had more choice on the Internet. And we have a set of policies that we follow - entrenched inside the culture - the most important of which is that we won't trap user data in proprietary systems. So we have a rule: You have to make it possible for people who don't like your service to get out. If I don't like Google, I can switch to Yahoo, Microsoft, or whatever. This has another impact that's not as obvious. It serves as a check and balance on poor-quality teams. They can't prevent users from fleeing bad products. It also helps us with this question of becoming too big and powerful."

Whether users ultimately believe that and decide to fully trust Google remains to be seen. Over the next several years, Google is going to be heavily scrutinized for its privacy and security practices once it becomes public knowledge how much data Google is sitting on, especially individual user data, history, and usage patterns.

As for Schmidt, he not only has the clear upper hand on the Web with Google, but he also joined the board of directors at Apple in 2006. With Apple eating away at Windows market share and publicly excoriating Windows in the "Get a Mac" commercials, Schmidt's work at Apple is also helping to quietly undermine one of Microsoft's core businesses.

Last year, at the Web 2.0 Expo in San Francisco, Schmidt and Battelle shared the stage for a keynote interview. In that session, Battelle reminded Schmidt of his comment about not competing with Microsoft when he first joined Google.

"I was wrong," Schmidt admitted.

Like it not, Eric Schmidt is destined to go down in history as one of the most active opponents to Bill Gates, Steve Ballmer, and the Microsoft legacy. During the past seven years, Schmidt's role in that saga has changed from whipping boy to white knight, and unless something dramatic happens it's very likely that Google and Schmidt will ultimately be portrayed as the good guys -- and the winners.