Don't waste your money on cheap little gizmos on Father's Day. Here are six intangibles that you can do for the geek dad that will be worth a lot more.

Leading up to Father's Day, you're going to see all kinds of lists of high-tech gifts for dad. The cliche Father's Day gifts used to be bad ties and golf balls. Now, it's turning into stuff like premium headphones and inductive chargers.

If you want to make a geek dad happy, then don't worry about the little gizmos. (What he really wants is that 70-inch 240Hz LED-backlit TV, but that's too expensive for Father's Day.) Instead, give him something intangible that will really matter. Here are six ideas.

1. No tech support calls from friends and family 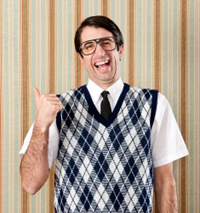 Most geek dads serve as the personal pro-bono tech support department for all of their friends, family, and neighbors. Tell all of the acquaintances, "no tech support calls on Father's Day" -- even if the laptop won't boot, even if the Internet is down, and even if the Roku box isn't working and (God forbid!) they can't stream The Tudors on Netflix. In fact, tell people no calls for all of Father's Day weekend. Better yet, go for a full one-week moratorium.

Let's be clear, dads love the children. There'd be no Father's Day without them. But, ask the kids to please be careful with their electronics for just one day. No dropping the iPod Touch on the stone tile floor. No slipping and dropping the Leapster into the bathtub. And, while they're at it, tell them no peanut butter-and-jelly fingers all over the Kindle, as a little bonus for dad. When you do these things, you don't realize how much stress it causes for the geek dad. Even if the device doesn't break, the geek dad is thinking that you may have caused long-term damage to the circuitry, and he's going to worry about when the technology will fail, which means he'll either have to fix it or shell out the money for a new one. On his special day, don't leave that hanging over the geek dad's head.

3. No nagging about too much time on the grid

For one day, don't remind dad about much time he spends sitting in front of a computer, give him a hard time about using both a laptop and a tablet while he's on the couch watching TV, or make fun of him for using a smartphone in his right hand while he washes the dishes with his left hand. These things are normal for geeks. There's nothing wrong with this. As the geek dad will gladly tell you, he knows a bunch of people who are way worse than he is about being too connected.

It's private. Don't touch private parts. It goes for silicon just like it does for the flesh. In case you don't know (even though the geek dad has told you a zillion times), he doesn't like it when you mess with his computer. Do not put your sticky fingers all over his favorite wireless keyboard. Do not change the wallpaper or the mouse tracking speed or any of the other settings that he has precisely specified. And -- this is very important -- when the geek dad is showing you something on the computer on Father's Day and you decide to point at something on the screen, never (I repeat, NEVER) take your finger and actually touch the LCD screen. It leaves fingerprints that have to be cleaned and microscopic residue that can eventually ruin the screen. Again, save the geek dad some headaches here.

5. Spouses: Clean out your own PC dust bunnies

One of the nastiest things about opening up a PC -- especially if it's at least a year old -- is the dust bunnies. And, often when truly geeky dads open up a spouse's PC to add RAM, drop in an expansion card, or troubleshoot a problem, they also end up having to chase out the dust bunnies so that they don't choke the computer's fans or ruin the air circulation. Since today's spouses are a lot more comfortable with tech than a decade or two ago, they could provide their geek husbands with a little surprise by cleaning out their own machines. If you a have a laptop instead of a desktop, just get some canned air and alcohol wipes and clean off the keyboard, screen, and case so that the geek husband doesn't have to the next time he does maintenance on your machine.

Walt Disney said that the whole reason he originally built Disneyland was so kids and parents could play together, rather than parents just watching their kids play. That's a great sentiment, and you've got to love Walt for bringing that idea into reality. However, grownups need their own play time, too. For geek dads who are also gamers, give them an hour or two alone to play on Father's Day. There can still be plenty of time for the family to play some Wii Bowling together, but give the geek dad a little of own time to kill zombies, level up, play the back nine of Augusta against Tiger Woods, or dunk on Lebron James.