We've criticized Microsoft for its Windows debacle, its failed mobile strategy, and more. However, here are five Microsoft bright spots that you might have missed.

I've hit Microsoft pretty hard recently for its Windows debacle, its failed mobile strategy, and its missed opportunities in the enterprise space. I continue to believe that the company is in the midst of an identity crisis that it refuses to acknowledge.

Still, not everything Microsoft is doing is a disaster. There are plenty of smart people who work for the Redmond, Washington colossus and there are several useful Microsoft products that are worth noting for those who follow business technology.

I've put together a quick list of five things Microsoft is doing right that may have slipped under your radar.

Microsoft officially turned on the lights of its online version of Microsoft Office on June 7. In any other week, this would have been the top news story in technology. However, earlier that same day in San Francisco, Steve Jobs unveiled the iPhone 4, which hogged the tech news spotlight all week.

The product is called Office Web Apps and it is a free service available at office.live.com (Microsoft's official line is that this is available to people in the US, UK, Canada, and Ireland). In order to log in, you'll need to create a Windows Live ID if you don't already have one.

Office Web Apps includes four applications: Word, Excel, PowerPoint, and OneNote. As you'd expect, these are stripped-down versions of the full Office 2010 apps, although earlier this year a Microsoft employee said that these may be the largest JavaScript Web apps on the planet.

My first impressions of Office Web Apps have been very good. The apps run fast, the interface is very familiar if you've already used Office, and you get a generous 25GB of free space as a result of the integration with SkyDrive. It even works well in non-Microsoft Web browsers and on mobile devices. This could bode well for Microsoft's future as a Web-based software provider. 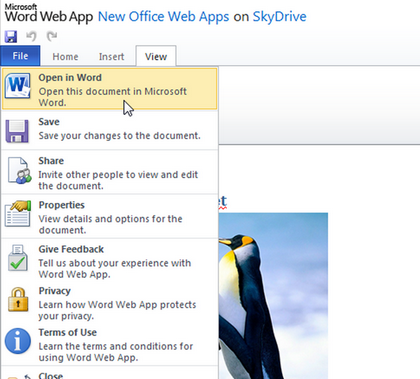 Microsoft's strategy of trying to squeeze the Windows OS into a smartphone has failed, as platforms like BlackBerry, iPhone, and Android have all proven by running circles around Windows Mobile. Microsoft has further bungled the issue by splitting its mobile strategy into three platforms: Windows Phone 7, Windows Embedded Compact 7, and the KIN devices.

However, in the midst of the mobile fiasco, there's one thing Microsoft is doing right that other smartphone makers should emulate: Cloud sync. It's the sole redeeming feature in Microsoft's KIN. Gizmodo's John Hermann nailed it when he explained:

Because smartphones are becoming increasingly important as computing devices, this is huge. Now imagine if Microsoft could integrate this kind of wireless phone-to-computer sync with its new Office Web Apps platform so that a business user could automatically have access to all of her current business documents from her smartphone, without having to physically to sync it to her computer or email a file to herself, etc. It would be like iTunes for your business files, except synced wirelessly over the Internet. This would be a killer feature that Microsoft could use to promote its devices to business professionals.

Arguably, the biggest problem with Microsoft Windows today is malware. The OS remains a huge target because of its massive installed base and the attacks against it are getting more sophisticated. As a result, way too many users are losing productivity because otherwise-functional Windows PCs are being riddled with spyware and malware. Even highly-skilled technologists like my ZDNet colleague Jason Perlow are getting hit.

And, while it's true that Mac and Linux can be just as susceptible to malware attacks as Windows, the fact is that they simply aren't as targeted as often and aren't likely to be in the near future. For that reason, Windows requires even stronger spyware/malware/antivirus protection.

What you may not realize is that Microsoft recognizes this and is doing a few things to address it. The Redmond giant has launched its Malware Protection Center portal as well as an enterprise protection product called Forefront.

On the consumer side, Microsoft has a free antivirus and anti-malware solution called Security Essentials, which is a very respectable option. It's based on Forefront, it's not nearly as much of a resource hog as Norton or McAfee, it catches at least as many threats, and the price is right. For small businesses and entrepreneurs, Security Essentials is a very good option for protecting your PCs. For enterprises, you could recommend that your employees use Security Essentials (or another free alternative, ClamAV) on any systems that will be connecting to corporate resources over the VPN.

Outlook 2010 brings a bundle of useful improvements, including the ability to work with multiple Exchange accounts, calendar preview within messages, the ability to see other messages from a recipient at the bottom of a message, the "Ignore" button for blocking an entire message thread, and archiving mail without PSTs (when combined with Exchange 2010).

In fact, Outlook 2010 has enough improvements that several members of TechRepublic's CIO Jury cited it as enough to make it worth the upgrade to Microsoft Office 2010 alone, as the CIO jury surprisingly voted in favor of Office 2010 as a worthy enterprise upgrade.

Microsoft SharePoint is one of the most widely-deployed applications that no one talks about. CIOs rarely mention it and the tech press shows little interest in it. And yet, if you ask IT professionals whether their organizations use SharePoint, you'd be surprised to learn how many of them do. A recent TechRepublic poll showed that 63% have it installed.

SharePoint has a boatload of features, but it is primarily used as an intranet portal. There are a ton of templates and built-in functionality for running an intranet, including an employee directory, wikis, and employee blogs, for example. The integration with Active Directory and Microsoft Office make SharePoint quick to deploy and easy to work with, especially for IT departments that are already Microsoft shops.

Microsoft itself appears to have gotten wise to the fact that SharePoint is one of its stealth successes. The company is now offering hosted SharePoint as a service and is aggressively marketing SharePoint 2010 to the enterprise as a valuable companion to Office 2010.