In his WWDC 2010 keynote, Steve Jobs cited "much deeper enterprise integration" as one of the major improvements in Apple's iPhone 4. Learn why.

In his WWDC 2010 keynote announcing the iPhone 4, Steve Jobs cited "much deeper enterprise integration" as one of the top features of Apple's fourth generation smartphone. Jobs took several minutes to talk about the improvements aimed at businesses.

Here's the slide Jobs showed when he talked about the enterprise. 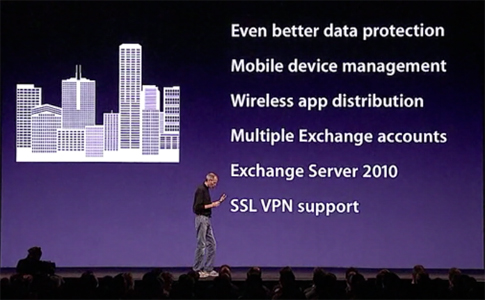 And, here's what Jobs said during his presentation:

"We got a lot of requests, and our enterprise customers are thrilled because we got all of that stuff into iOS 4--much better data protection, device management, they can wirelessly distribute apps around the enterprise, multiple Exchange [account] support, deeper VPN support. Our enterprise customers seem really, really excited about iOS 4."

After the event, Apple provided more details about the enterprise improvements with iPhone 4. Here are quotes from Apple on each of the issues:

Beyond the features that Apple cited, there are a few other iPhone 4 upgrades that could also impact businesses:

For those enterprises approaching the iPhone for the first time, here are three Apple links that haven't been fully updated for iPhone 4 yet, but can still help IT pros in evaluating whether the iPhone will meet their needs.