Steve Jobs declared the start of the post-PC era on Tuesday at the D8 conference. Steve Ballmer fired back saying there's a lot of growth left in the PC market.

Apple CEO Steve Jobs declared the beginning of the post-PC era on Tuesday at the D8 conference. Microsoft CEO Steve Ballmer took the stage on Thursday and fired back, saying there's a lot of growth left in the PC market. 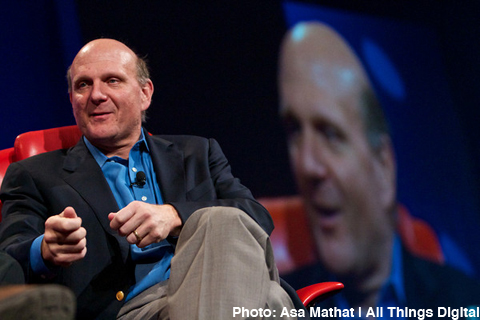 Ballmer and Microsoft CTO Ray Ozzie did a joint interview with The Wall Street Journal's Walt Mossberg at D8, where they talked about cloud computing, Microsoft's mobile strategy, and Jobs' comments about the future of personal computing.

"I think people are going to be using PCs in a greater and greater numbers for many years to come. I think PCs are going to continue to shift in form factor. PCs will look different next year, the year after, the year after that... I think the PC as we know it will continue to morph form factor... Windows machines are not going to be 'trucks.' They will continue to be the mass popularizer of a variety of things that people want to do with information... I think there's a fundamental difference between small-enough-to-be-in-your-pocket and not-small-enough-to-be-in-your-pocket. There will be some distinct differences in usage patterns between those two devices."

He is the five-minute video clip with the full context of Ballmer's remarks:

Ballmer doesn't see tablets as anything special. In his view, tablets are simply one of many PC form factors that computer makers are experimenting with and will continue to experiment with in the years ahead. Ballmer believes business people (and many consumers) will have two computing devices: a PC and a mobile phone. He admitted that Microsoft missed the boat on mobile, but thinks the market is still dynamic enough that Microsoft can make a comeback and win a piece of it.

Ballmer's PC+smartphone view of the industry is not very original. In leadership parlance, this is what you call reactionary rather than visionary. Ballmer has never tried to be a visionary. He's an operations guy. He's all about executing well. That means you have to make your bets on the right things. Unfortunately, that requires at least a little bit of vision.

Microsoft is the incumbent, the industry leader in personal computing, so it doesn't have to be as bold and risky as Apple. Microsoft will be able to milk the Windows and Office franchises for a lot of profits for the next decade as more and more businesses in developing nations join the digital revolution. That's what Ballmer has his eye on.

Still, tablets and smartphones are offering a faster and easier path to join the digital world. It's entirely possible that many of the users in developing countries will skip traditional PCs altogether. If Ballmer doesn't get Microsoft out in front of that trend, then the company is in danger of missing out on the industry's next big growth phase.