While most of us tend to think of Google as a Web-leading Silicon Valley company, a new study argues that Google is actually a disruptive technology that is transforming industries, companies, and communities. It could even engulf traditional IT departments.

Gartner has embarked on a wide-reaching new study of Google and its potential impact on IT, enterprise businesses, and society in general in the coming years. On April 10 at the Gartner Symposium ITxpo 2008 in Las Vegas, Gartner Vice President Richard Hunter revealed some of the first data points from this study.

The two most interesting points were:

1.) The best way to think of Google is as a disruptive technology.

2.) Disruptive technologies create big losers and big winners, and one of the biggest losers in the Google disruption could be traditional IT departments.

Google as a disruptive technology

This new study is being conducted by a team of 15 Gartner researchers, led by Hunter, and the full report will be published in mid-2008. The title of Hunter's presentation at ITxpo was "What Does Google Know?" The answer to that question was even more sobering than I expected, as the slide below demonstrates. 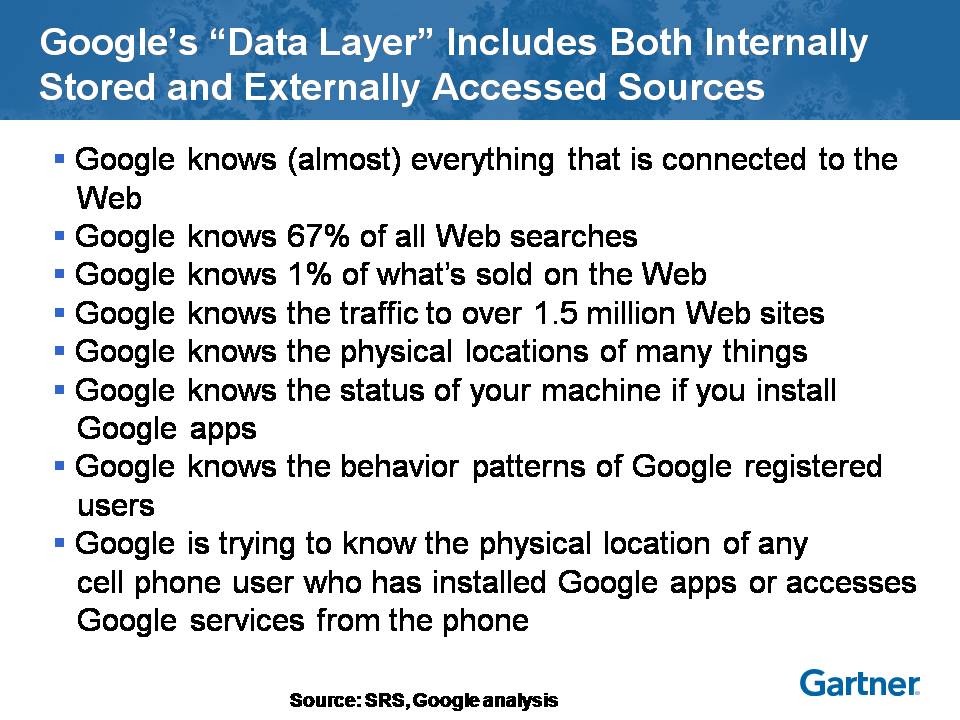 Hunter added that Google will know a lot more about what's sold on the Web if Google Checkout takes off, and could soon know a lot about medicine and health patterns if Google Health Records gets adopted.

The Gartner researchers have estimated that Google technology can address 100 exabytes of data (an exabyte is equal to a billion gigabytes). "Their infrastructure has unprecedented scale," said Hunter, "and what is even more impressive is their ability to connect vast quantities of information... Google is sitting on the biggest pile of information that has ever been collected in the world."

The reason why Gartner chose to characterize Google as a disruptive technology - rather than just an Internet search engine company - is due to the ambitions that Google has for all of that data and the potential impact that those ambitions could have on the technology industry.

"Where the previous [computing] paradigm has been about my computer, my technology, my stuff ... Google is trying to deliver any information, anywhere, to anyone in the world, on any device," said Hunter.

"Google's paradigm is a different paradigm. It's an open source paradigm... We're about to see a war of paradigms." Clearly, the leader of the "previous paradigm" and the counter-movement to Google is Microsoft.

However, we also can't forget that the Google paradigm includes massive privacy concerns. Hunter noted that Google continues to struggle to find the right balance between privacy, security, and its legitimate business interests. The more data Google collects, the bigger and more valuable target it becomes for electronic criminals. That will also make it a bigger target for governments, politicians, and citizen groups.

Hunter stated, "We believe Google's information security will be a political issue worldwide by the end of the year in 2010."

Here are few other interesting quotes from Hunter's presentation, based on the study:

Google's disruption to IT

"Google is disruptive and disruptive technologies produce big winners and big losers," Hunter said, "One of the big losers is potentially traditional IT departments."

As part of his presentation, Hunter specifically noted a number of ways in which the Google revolution would disrupt the IT industry in general:

However, after the presentation I followed up with Richard to get further clarification on how IT departments could be significant losers in the Google disruption. Here was his response:

"Google has the potential to be the first-choice provider of many services that are now handled by internal IT organizations, starting with non-competitively-differentiating services such as email (which Google already provides to a number of enterprises), and ultimately including high-value-added functions and services such as business intelligence, mobile sales support, and others. Some IT organizations might consider it a boon to pass these functions on to Google so that the IT department can concentrate on very enterprise-specific competitively differentiating applications. IT organizations that measure their worth in terms of how much of the company's IT needs they supply themselves will be less happy to see Google move in on their turf-and I do mean specifically that in many cases it will be an argument about turf, not enterprise value.

"An important question is: can Google provide the quality (e.g. reliability, availability, security, etc.) that enterprises-a more demanding market compared to individual consumers-require from their suppliers? Consumers are satisfied when the potential provider says 'Of course!' Smart enterprises demand certification from someone besides the provider. Providing that certification will be something new for Google. On the other hand, many IT organizations aren't mature enough to provide proof of their own capabilities in terms of value for money, and so will have a difficult time proving superiority over any external provider, whether or not it's Google".

What Gartner is arguing is that Google's database and data center magic is creating a massive cultural movement and a competitive advantage that is going to sweep away businesses and industries and transform the technology world. In fact, Gartner sees Google becoming so large and powerful from a data storage and access standpoint that it is going to attract scrutiny - and potential regulations - from governments.

While these predictions have legs, several of the trends are larger than Google. As far as IT departments go, there are two related trends that will transform IT over the next decade: utility computing and managed services. The utility computing model will allow IT departments to deploy only the computing capacity that is needed and to track it and charge it to the appropriate business unit, department, or project. That will allow IT to tie the value of technology much more closely to business decisions.

Some businesses won't want to handle that type of IT internally and so they will outsource it to providers like IBM, Hewlett-Packard, EDS, and Verizon Business. It's unclear whether Google will want to get into the managed services business, but it might make sense for them partner with vendors like the four mentioned in order to offer services such as e-mail, storage, and business intelligence.

In terms of Google's technical advantage - part of which is tied to its sheer data center capacity - let's not forget that the other two big data center builders, Microsoft and Yahoo, could tie the knot soon and became a much more potent threat to Google's vision. That could especially be the case if Microsoft allows its new technology leader, Ray Ozzie, to drive Microsoft in a much more Google-like direction centered around cloud computing. It's also not a given that what Google has created in the world's largest and most effective database isn't something that Microsoft will eventually catch up to and co-opt.

Nevertheless, Google is obviously on the leading edge many of the trends that are powering the next breaking waves in the technology industry, and the effects of these trends will fundamentally change the way corporate IT departments are organized, operated, and financed over the next decade.