Google Android will be delayed until a fourth quarter launch with T-Mobile, and a 2009 arrival with other carriers. Now that it's in the software business, Google is facing the same kind of product delay pressures that dog Microsoft, Apple, and other tech vendors.

Google Android will be delayed until a fourth quarter launch with T-Mobile, and a 2009 arrival with other carriers. Now that it's in the software business, Google is facing the same kind of product delay pressures that dog Microsoft, Apple, and other tech vendors.

It's official. Google is now a big time software developer. How can we tell? Its largest software development project ever -- the Google Android smartphone platform -- will officially be delayed. 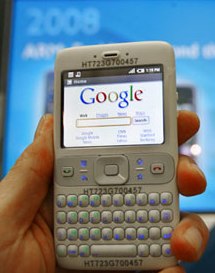 Google told the Journal that Android phones would arrive in the U.S in the fourth quarter, but the newspaper's sources indicated that it is likely to launch with only a single carrier, T-Mobile. The next launch will probably happen with Sprint and that will likely be delayed until 2009, with Verizon Wireless following Sprint later in 2009. AT&T is still evaluating whether or not it will offer Android phones.

Android is a software platform for mobile devices that will include:

According to The Wall Street Journal article, the platform is having its share of growing pains:

Developers cite hassles of creating programs while Android is still being completed. One is Louis Gump, vice president of mobile for Weather Channel Interactive, which has built an Android-based mobile weather application. Overall, he says, he has been impressed by the Google software, which has enabled his company to build features such as the ability to look up the weather in a particular neighborhood. But he says Weather Channel has had to "rewrite a few things" so far, and Google's most recent revision of Android "is going to require some significant work," he says.

Google's Director of Mobile Platforms, Andy Rubin, blamed the Android delay on the natural process of software development and the give-and-take involved in allowing its hardware and carrier partners to lobby for changes and new features. "This is where the pain happens. We are very, very close," said Rubin.

Up until now, Google's products have often had a golden halo around them. Google doesn't typically pre-announce products the way Microsoft and Apple do. Instead, it usually launches products when it announces them and slaps on a "Beta" tag, which serves to deflect criticism because, after all, "it's still just a Beta release."

That's not possible with Android. You can't hide behind a "Beta" label on a smartphone. It has to be fully-baked, or else you have to delay it.