Microsoft SQL Server's identity column generates sequential values for new records using a seed value. Seeding and reseeding an identity column is easy and relatively safe, if you do it correctly. Susan Sales Harkins shows you how it works.

Microsoft SQL Server's identity column generates sequential values for new records using a seed value. The term seed refers to the internal value SQL Server uses to generate the next value in the sequence. By default, an identity column's first value is 1 and each new value increments by one (1, 2, 3, 4, and so on).

You can control the column's first and subsequent values, by specifying those values when you create the column. For instance, you might want to begin with a purchase order number of 1001 rather than 1.

Once the table's in production you can reset, or reseed the column. In other words, you can change the column's seed value at any time. For instance, you might reseed a column after deleting records or moving data to an archive table.

The good news is that seeding and reseeding an identity column is easy and relatively safe, if you do it correctly. It's common to seed a new table or to reseed a production, but empty table. However, as a general rule, it's not a great idea to reseed an identity column in a table that contains data without some serious checks and balances.

Throughout this article, I use SQL Server Express and Management Studio Express because both are free and therefore available to all readers. However, the logic and instructions are the same in SQL Server.

When you create an identity column, you specify two values: Identity Seed and Identity Increment. The seed value specifies the column's first (or next) value. SQL Server adds the increment value to the last identity value to generate the next value, in sequence.

For instance, a seed value of 1 and an increment value of 2 will generate the values 1, 3, 5, 7, and so on. By default, both the seed and incremental values are 1. Business rules often require a bit of customization. 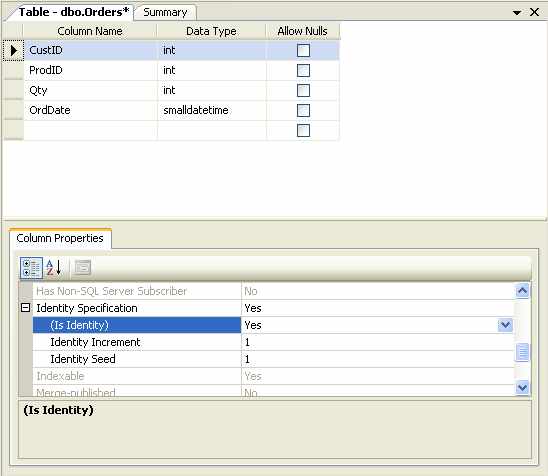 Seed an identity column when you create it in Management Studio.

If you create the table using code, you can easily seed the table's identity column using the Transact-SQL (T-SQL) CREATE TABLE statement in the following form:

In the code, datatype is a numeric column. Both seed and increment are optional and the default value for both is 1.

Figure B shows the result of using CREATE TABLE to create a table named Orders and setting the OrderID column's identity seed and increment values to 100 and 10, respectively. As you can see, the first identity value is 100 and each subsequent value increases by 10. (You can decrease identity values by specify a negative value for increment.) 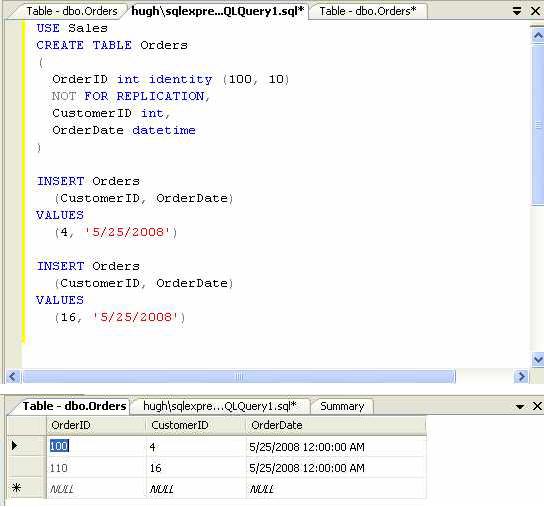 Use CREATE TABLE to seed an identity column.

Technically, DBCC CHECKIDENT checks and corrects an identity value. Simply put, use it to learn the current identity value or to reseed an existing identity column.

Once a table's in production, you might want to determine the seed value, as shown in Figure C. Executing DBCC CHECKIDENT with no argument other than the table's name returns the column's current identity value, which is the last value generated and stored in the table (see Figure B).

These two values will usually be the same. If they're not, reset the identity value to avoid errors or gaps in the sequence of values. 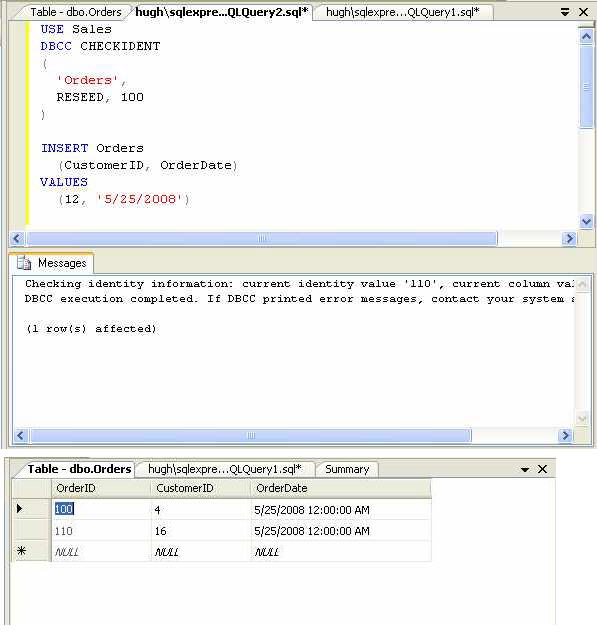 What can happen when an identity column isn't part of a primary key.

When the identity column is part of a primary key, SQL Server protects the validity of the existing data by returning a violation error, as shown in Figure E. Now, the question is, did SQL Server reset the seed value or not -- it did. You can reseed the column to a value that has the potential to create a duplicate, but SQL Server won't let you enter the record. That's why you must be careful to check existing identity values before reseeding. 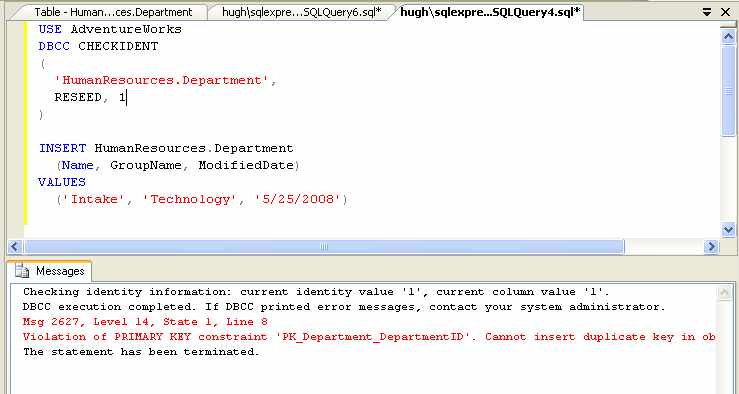 When reseeding identity values, keep the following behaviors in mind:

Susan Sales Harkins is an independent consultant and the author of several articles and books on database technologies. Her most recent book is "Mastering Microsoft SQL Server 2005 Express," with Mike Gunderloy, published by Sybex. Other collaborations with Mike Gunderloy are "Automating Microsoft Access 2003 with VBA," "Upgrader's Guide to Microsoft Office System 2003," "ICDL Exam Cram 2," and "Absolute Beginner's Guide to Microsoft Access 2003" all by Que. Currently, Susan volunteers as the Publications Director for Database Advisors at http://www.databaseadvisors.com. You can reach her at ssharkins@gmail.com.