If you're running an older version of Windows DNS services or some other DNS service on your network and you want to deploy Active Directory, Scott Lowe says migrating to Windows Server 2008's DNS services should be the first step in your plans.

Until Windows 2000 Server and Active Directory entered the scene, DNS was an optional Windows component. Although DNS has always been necessary at some level in the IP world, Windows-only environments running Active Directory require this service in order to function. Technically, even though Active Directory used to be able to use other DNS services to operate, using Windows Server's built-in DNS services to provide the best overall integration capabilities and results in fewer issues.

If you're running an older version of Windows DNS services or some other DNS service on your network and you want to deploy Active Directory, migrating to Windows Server 2008's DNS services should be the first step in your plans. In this article, I will discuss ways in which you can achieve this goal.

There are two ways you can migrate your DNS services to Windows Server 2008 -- although one is definitely better than the other. Your available options are:

The easiest, and preferred method, to migrate your DNS zone data is to manually imitate a zone transfer from the DNS server you are replacing to your new Windows Server 2008 DNS server. But what does this really entail? What must you do ahead of time?

You first should determine what type of DNS system you are migrating from. Is it a Windows-based DNS or a UNIX BIND system that uses only standard DNS zone servers? Or is it a Windows 2000/2003 Server-based system that is currently operating with an Active Directory-integrated zone? Migrating Active Directory-integrated zones is a simple task -- just add the new server to the Name Servers tab of the zone properties and ensure that the new server is authorized to perform zone replication with the zone. Once DNS is operating properly on the new Windows Server 2008, you can remove it from the older Windows server, if desired. Figure A gives you a look at the Name Servers tab on an Active Directory-integrated zone on a server running Windows Server 2008. 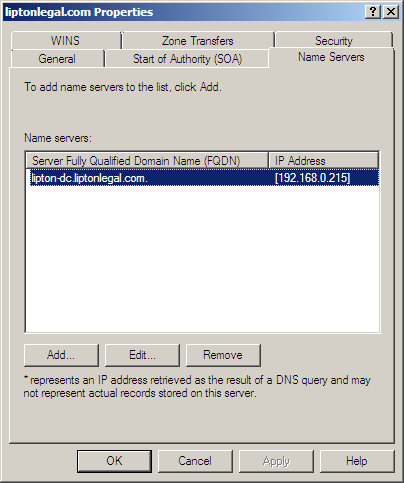 If you are migrating from a system that uses standard DNS zones, things get a little more complicated -- but not horribly difficult. The first thing to remember about zone transfers is how the standard DNS zone servers are arranged. Standard DNS zones operate in a single master arrangement where only one DNS server has the master writable copy of the DNS zone data; all other servers have read-only copies. The two types of standard zone servers you may encounter are:

To create a new standard secondary zone, follow these steps: 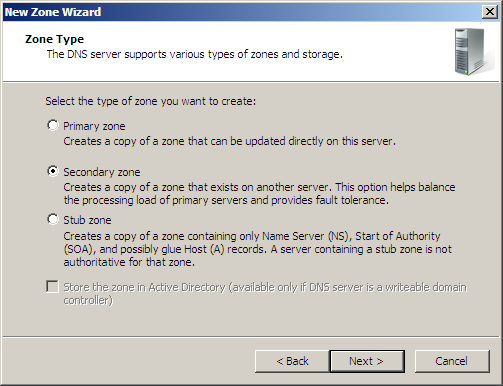 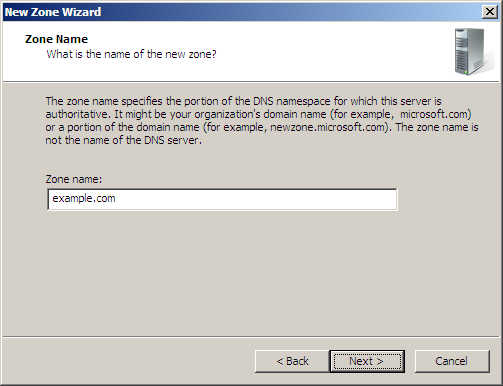 Provide the zone name that should be added to your DNS server. 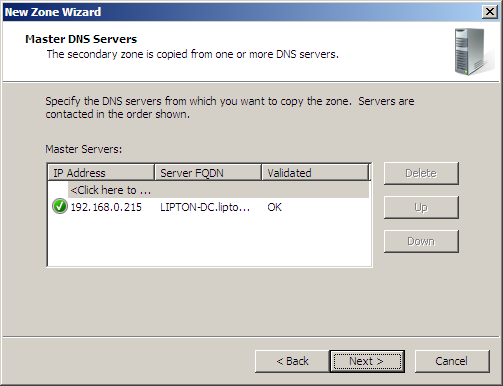 The IP address of the master DNS server for this domain.

If you get an error indicating that the transfer could not take place and your master server is running Windows, make sure that the server to which you're attempting to transfer the zone is allowed to initiate the transfer. On the server with the master records, right-click the zone and choose Properties. On the Zone Transfers tab, provide the IP address of the server on which you just created a secondary zone and click OK.  Afterwards, on the target server, right-click the new secondary zone and select Transfer From Master (Figure E). 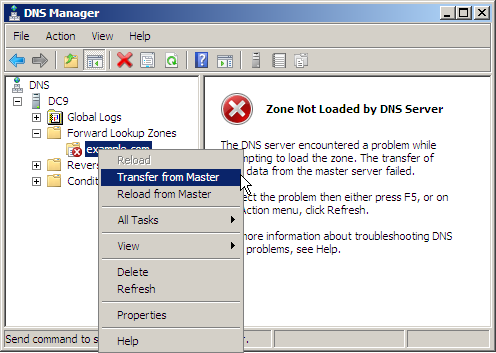 Manually initiate the zone transfer if it fails the first time.

Once the transfer completes, check the zone on the new server and see if your DNS records made their way to the new server. Once you verify that the new standard secondary zone is functioning properly, you can decommission the existing primary zone server if you like. You will now need to quickly change the secondary zone into a primary zone. For even better performance and security, you should consider making it Active Directory-integrated. Either way, you will need to right-click the zone node and open the Properties dialog box. On the General tab, click the Change button in the Type area. This will open the dialog box seen in Figure F, allowing you to change the zone into a standard primary zone or an Active Directory-integrated zone, as desired. You will be prompted to confirm your decision. (In Figure F, the option to integrate the new zone into Active Directory is not enabled because my test server is not joined to a domain.) 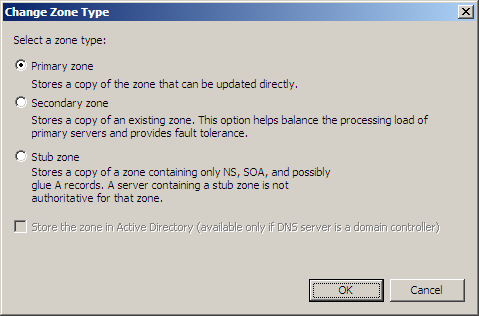 Change the new zone to a primary zone.

If you change the zone into an Active Directory-integrated zone, it will, by default, be configured to not use dynamic updates. From the General tab of the Zone Properties dialog box, you should change this setting as soon as you can to Secure Only to allow the greatest flexibility and security of your zone data.

Alternatively, you can perform the zone transfer method from the command line using the following command:

You can specify multiple IP addresses by separating them with a comma. The FileName value must be the exact file name of the standard primary zone, just the same as when you are creating the zone via the DNS console.

For all versions of Windows since Windows NT 4.0, if you still want to manually copy your zone data, you can locate the raw files at %systemroot%\system32\dns.

If you are copying a BIND DNS zone file, Table A provides you with the naming conventions used by BIND DNS and Windows Server 2008 DNS. Table A

This is about all there is to migrating your older Windows Server-based DNS zones to a new Windows Server 2008 computer. As long as you execute the process in the steps outlined here, you should have no problems.