TechRepublic members' long-term plans for using Exchange and their virtualization plans for Exchange are revealed in these poll results.

Several weeks ago, I asked TechRepublic readers to vote in two polls related to the long-term use of Exchange. The responses have been enlightening, so I decided to take a quick stab at some analysis. (The data below is based on the poll results at the time of this writing.)

For the first question, we received 443 responses, and we received 296 responses to the second question. While this is hardly a scientific poll, 443 responses is a respectable sample size from which to draw very general, broad conclusions, but with a major caveat: I suspect that the results are significantly skewed by those with favorable views of Exchange given the original article title of "What are your long-term plans for Exchange?" None of the conclusions drawn from these polls should be used beyond getting a general sense of what's happening in other organizations that use Microsoft Exchange. Further, because of rounding, percentages don't always hit exactly 100%.

Question 1: What are the long-term plans for Exchange in your organization? A total of 80% of respondents indicated that their organizations plan to remain on Exchange, although they might move to a hosted Exchange service in favor of maintaining an internal Exchange infrastructure (Figure A). Figure A 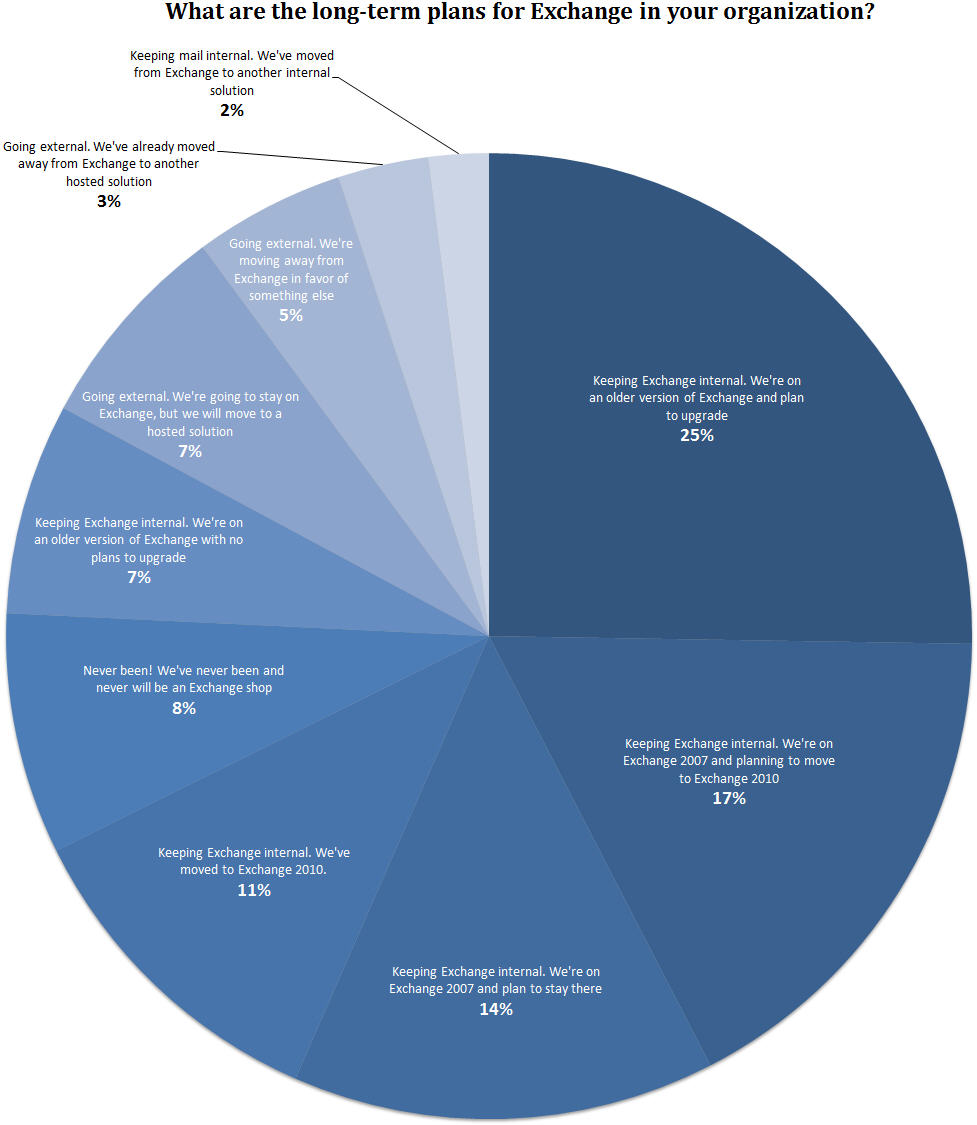 As for the location at which Exchange will ultimately operate in many of your organizations, for those who plan to stick with Exchange, 88% plan to maintain an internal Exchange infrastructure; 12% plan to outsource Exchange in some fashion (Figure B). This statistic doesn't indicate overwhelming support for cloud-based Exchange, but 12% isn't exactly a small number, either. I wish I could obtain an organizational demographic breakdown to gain a better understanding of what organizations of different size and in different verticals plan to do with Exchange. For example, did mostly large organizations respond, or was there a reasonable inclusion of smaller organizations? Is education more likely than healthcare to consider outsourcing options? (Note: For this graph, I excluded the non-Exchange responses, so the graph below includes only those who intend to continue using Exchange.) Figure B 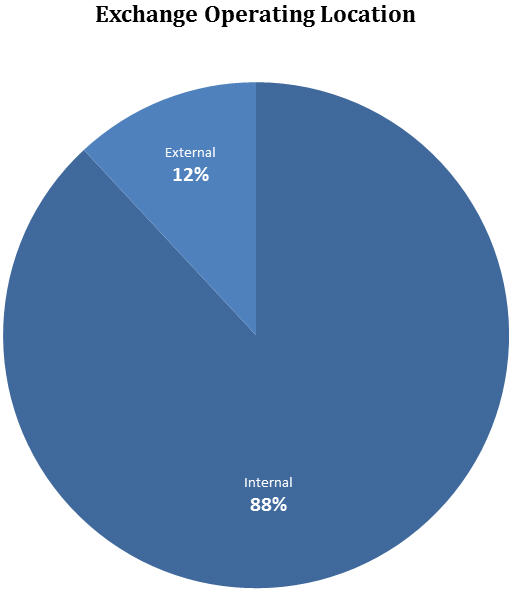 From a long-term perspective, 76% of respondents plan to continue their use of Exchange, although that doesn't necessarily mean that these same organizations plan to make the switch to Exchange 2010 (more on that later). Of the 15% of respondents indicated in this graph, Exchange has never existed at their companies (8%); Exchange will soon be eliminated in favor or another solution (5%); or the company has already moved to another internal solution (2%) (Figure C). Figure C 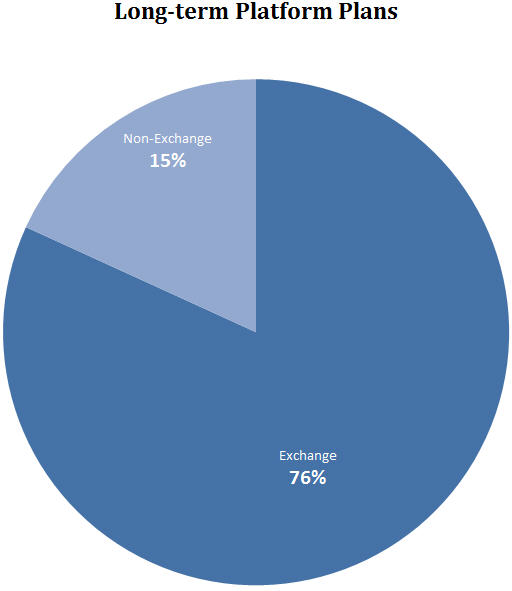 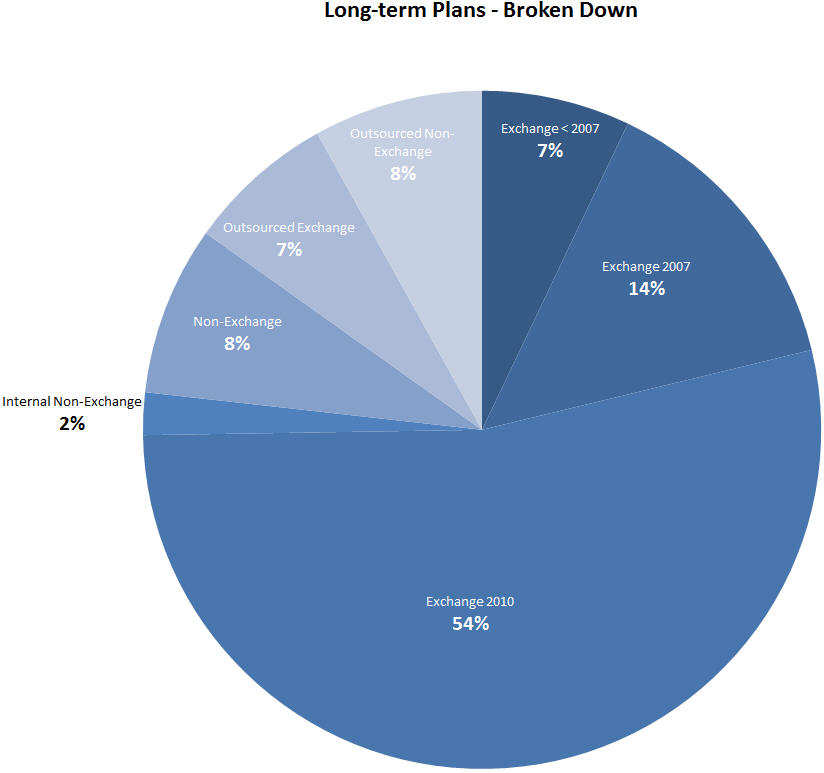 Question 2: For those keeping Exchange internal, what are your virtualization plans for Exchange?

The responses to the second question form, theoretically, a subset of the Exchange-positive answers from the first question. However, bear in mind that some people who are moving away from Exchange or have never used Exchange may have also responses, thus skewing the possible results a bit. 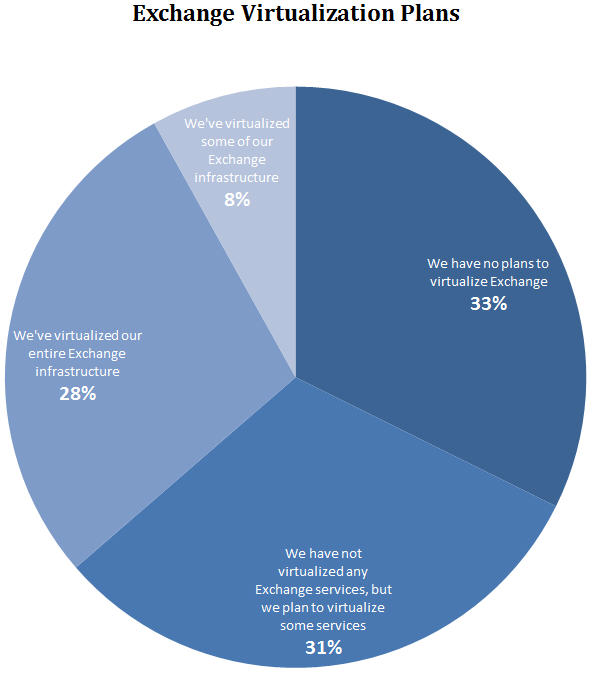 Again, depending on how people interpret the question may lead to a variety of reasons that the results turned out the way that they did. I was stunned to learn than 28% of respondents have fully virtualized Exchange. I expected to see a double-digit number, but I did not expect it to be quite that high. This is another case where respondent demographics would be invaluable. Are the people in the 28% group all small, single-server organizations?

My organization, Westminster College, falls into the 8% that have virtualized some Exchange services.

I wasn't surprised at all by the fact that 31% of organizations plan to virtualize Exchange, especially with Exchange 2010's virtualization friendly I/O footprint.

In short, fully 2/3 of Exchange organizations are virtualizing or plan to virtualize some or all of their Exchange environments. What a different world it is from just a few years ago when virtualizing Exchange 2003 was certainly not considered a best practice. It's obvious that many organizations understand the benefit that can come from adding Exchange as just another service on top of the virtualization stack.

From this information (even though it was derived from an unscientific survey), you can glean general trends from the actions of other organizations to help you dictate your own course. The phrase "where there's smoke, there's fire" can mean a lot. For instance:

Keep up with Scott Lowe's posts on TechRepublic