Many RAID controllers now support both RAID 5 and RAID 6. IT pro Rick Vanover explains what RAID 6 is and when to select it over RAID 5.

When it comes to architecting a storage solution, planning is key. In addition to selecting the storage protocol (iSCSI, fibre channel, NAS, etc.) and disk type to use (SAS, SATA, SSD, etc.), you should also give a lot of thought about what RAID algorithm to use.

I used to try to keep it simple and stick to either RAID 1 or RAID 5 when I wasn't working with larger amounts of storage. However, when it comes to provisioning larger storage in any SAN or NAS environment, it may be worth selecting RAID 6 over RAID 5 for larger arrays. To help you understand how RAID 5 and RAID 6 differ, we'll explain each RAID type.

RAID 5 is an array that has a distributed parity bit across the array. Figure A is a representation of RAID 5. Figure A 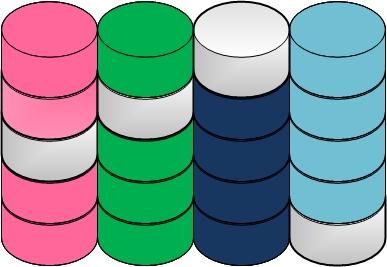 The grey blocks are the parity bit through the array. RAID 5 takes a minimum of three drives to implement; this example uses four drives to give an easier visual comparison to RAID 6. 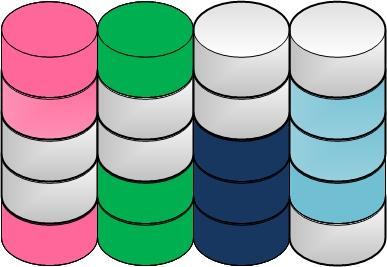 The grey blocks are the parity bits, but the two parity algorithms exist separately on their blocks. RAID 6 has more overhead in terms of usable storage compared to the raw amount, as well as a more complex RAID controller algothrithm. According to the AC&NC RAID information sheet, RAID 5 has better write performance.

I prefer building for RAID 6 in spite of the RAID 5 write performance advantage. This is primarily due to the rebuild times being less impactful on disk with RAID 6 even though they take longer, which is an important factor considering we now have 2 TB or larger disks in use in many NAS and SAN storage systems. RAID 6 has additional protection against block failures and controller errors by the extra parity. If zero loss of data is a priority, this is something to consider. I've had controllers have logic errors and data loss even when the actual disks are healthy.

What is your take on RAID 5 vs. RAID 6? Share your comments below.

TechRepublic's Servers and Storage newsletter, delivered on Monday and Wednesday, offers tips that will help you manage and optimize your data center. Automatically sign up today!