Tim Chapman identifies a few basic things to look for in a graphical execution plan to help you better understand how SQL Server uses indexes. He also offers ideas about how to make your queries faster.

Execution plans are one of the best tools to use to tune your SQL Server queries. In this article, I identify a few basic things to look for in a graphical execution plan to help you better understand how SQL Server uses indexes. I also offer ideas about how to make your queries faster.

Setting up my example

Run this statement to turn on the IO statistics for our queries.

In order to the view the execution plan for the queries I will run, I need to turn the option on. To do this, I right-click in the Query Editor window and select Include Actual Execution Plan. See Figure A. Figure A 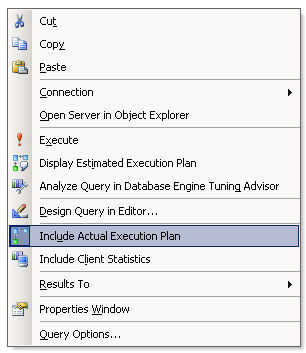 The following statement selects a row from the SalesHistory table based on a SaleID, on which there is a clustered index.

You can see the graphical execution plan and statistics for this query in Figure B. Figure B

The query optimizer performed a Clustered Index Seek on the query, which is technically the fastest type of search that you will see on a table. Notice that there were three logical reads involved in finding this row in the table:

The script below searches for all records in the SalesHistory table where the product is PoolTable. There is currently no index on this column, and there are only three different values in this field for all of the rows in the table. The possible values found could be PoolTable, Computer, or BigScreen.

So, what will happen if we create an index on the Product column in SalesHistory table? If you run the following statement to create a nonclusterd index on this table, you will notice that nothing has changed, even with an index on the Product column. The execution plan and the number of logical reads are the same because of the selectivity of the values in the column. There are only three different values for all of the rows in this table, so an additional index isn't going to help our case because there are so many records to pull back. Indexes are most beneficial when they are declared on columns that have many distinct values.

I am dropping the index so it doesn't skew any results from the rest of my examples.

The SaleDate in the SalesHistory table is reasonably unique based upon the script I used to generate the data. If I create an index on the SaleDate and search for a certain data, I expect that my search will use the index a lot more effectively than my indexes on the Product column.

It's generally a good idea to avoid Bookmark Lookups if you can because of the overhead of the extra reads involved in finding the data you need. The typical fix for them is to include the extra columns that you are reading in the index used to find the data. This is not going to work for every case, so it will take some effort to find a balance that suits your needs. See Figure D. Figure D

Now I want to see the execution plan for the same query but without a clustered index on the SaleID column, so I will need to drop the clustered index.

Because my table doesn't currently have a clustered index, I want to recreate the one that I had on the table. See the following code:

The examples in this article are not a definitive guide for building indexes or reading execution plans and query tuning. My goal is to point you in the right direction to learn about tuning your own queries. Query tuning isn't an exact science, and the needs of your database will change over time. The more you experiment with the possible combinations of indexes, the more successful you will be.

Next time, I plan to take another look at graphical execution plans and how to read them when table joins occur.

Tim Chapman a SQL Server database administrator and consultant who works for a bank in Louisville, KY. Tim has more than eight years of IT experience, and he is a Microsoft certified Database Developer and Administrator. If you would like to contact Tim, please e-mail him at chapman.tim@gmail.com.

Tim Chapman is a SQL Server MVP, a database architect, and an administrator who works as an independent consultant in Raleigh, NC, and has more than nine years of IT experience.