Serving a dynamic campus community out of a repurposed classroom in a decades-old building has its challenges. Scott Lowe describes his team's efforts to revitalize a college's neglected data center.

Westminster College's IT infrastructure has grown throughout the years in a very organic way. In the beginning, it was only a single VAX terminal connected to the University of Missouri; now it's a fiber-connected network with thousands of nodes, dozens of servers, and terabytes of storage.

I'm very happy with where Westminster College is headed in terms of infrastructure and architecture. However, one area that has not been up to par is the physical location where we house our infrastructure. We've spent time fixing up what used to be a basement classroom in the campus administration. I wish I'd had the forethought to take pictures of what the server room looked like a while back, but I didn't; I did take a few "after" photos. In this post, I describe what improvements our IT team made and explain why we made those changes.

Details about the "before" server room

Our server room is a repurposed basement classroom that was granted to IT well before my arrival at the college. The room measures about 15 x 15, has a concrete floor, and has a drop ceiling that is a few inches below the floor structure supporting the floor above.

When I started at Westminster, the room looked like the diagram in Figure A. This isn't a scale drawing, but you can see where the various components were placed. Figure A

There were three server racks (none of which were full) that housed the college's couple dozen servers. The campus fiber optic network at the time was all multimode and terminated in the network core you see on the diagram. The blue box represents the cabling for the building housing the server room. All of that cabling is terminated into a wall mount rack and feed the systems and users that work in Westminster Hall, the building in which the data center resides.

As you can see, there were three lights in the room. The lights provided enough light to work by but left some darkish spots.

The two green boxes on opposite walls of the room were patch panels that were connected to one another across the room with the cabling running above the drop ceiling; this was the cabling used to connect the servers to the core switch. Without a raised floor, this was a decent alternative, but it didn't provide for much growth and working on it was a pain.

The A/C unit in the back of the room is a standalone unit with four air vents blowing out the top of the unit and pointing in various directions to cover as much of the room as possible.

The room has no raised floor, and it never will -- it's a basement with a concrete basement floor. Although we could jackhammer out enough material to create a raised floor, it's not really necessary anymore.

The room had a lot of problems, including:

Improvements to create the "after" server room

Throughout the past few months, as time has permitted, my data center guy and I made a bunch of changes designed to correct some of these problems. Figure B is a look at the new layout. Figure B

A newly fixed up server room

Moved server racks after eliminating one First, we eliminated one server rack and turned the remaining two server racks (Figure C and Figure D) so the rear air flow was not impeded by a wall. This gives us ample room to work behind servers without worrying about claustrophobia setting in.

We were able to eliminate a full rack by following these steps: 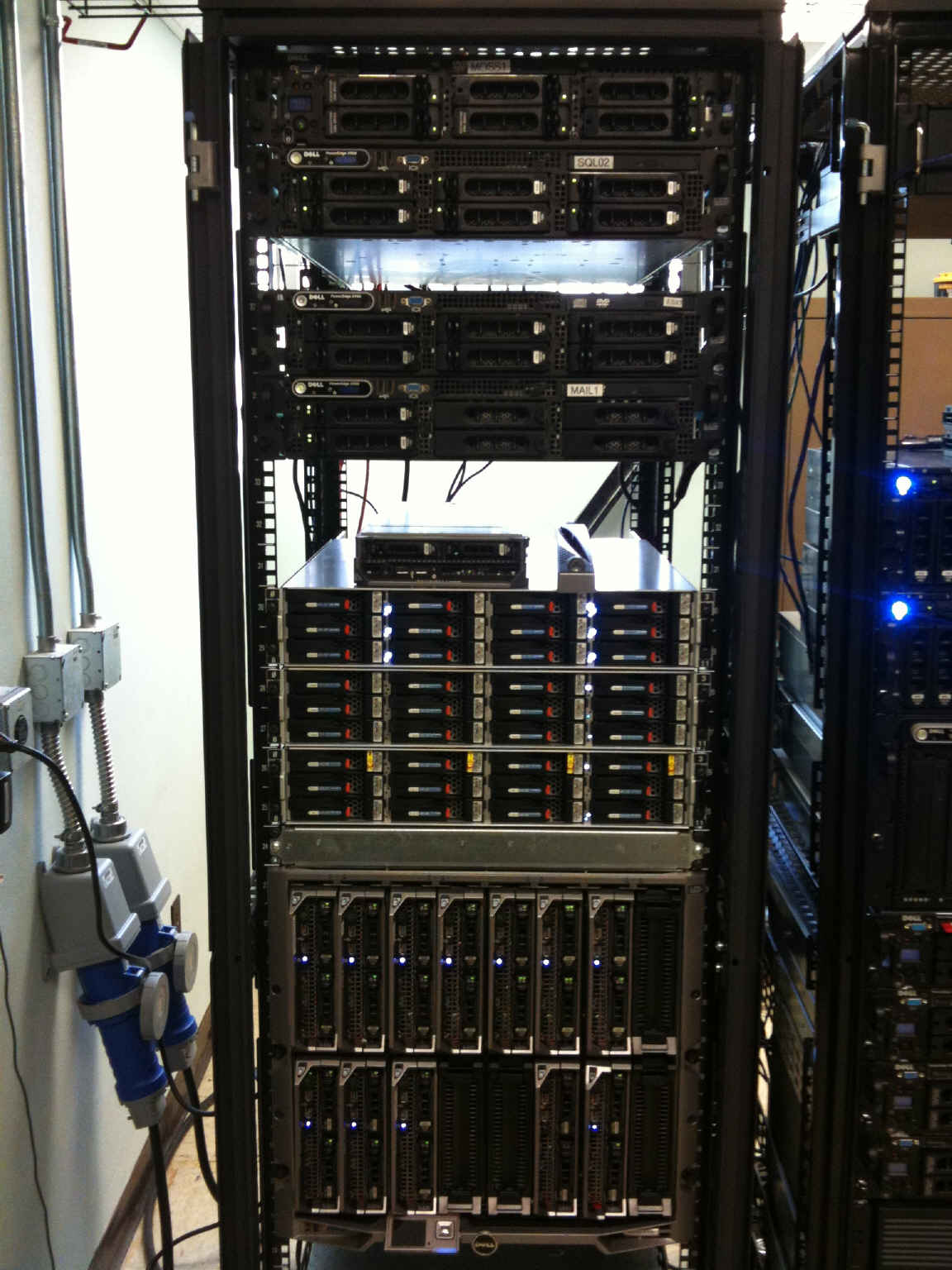 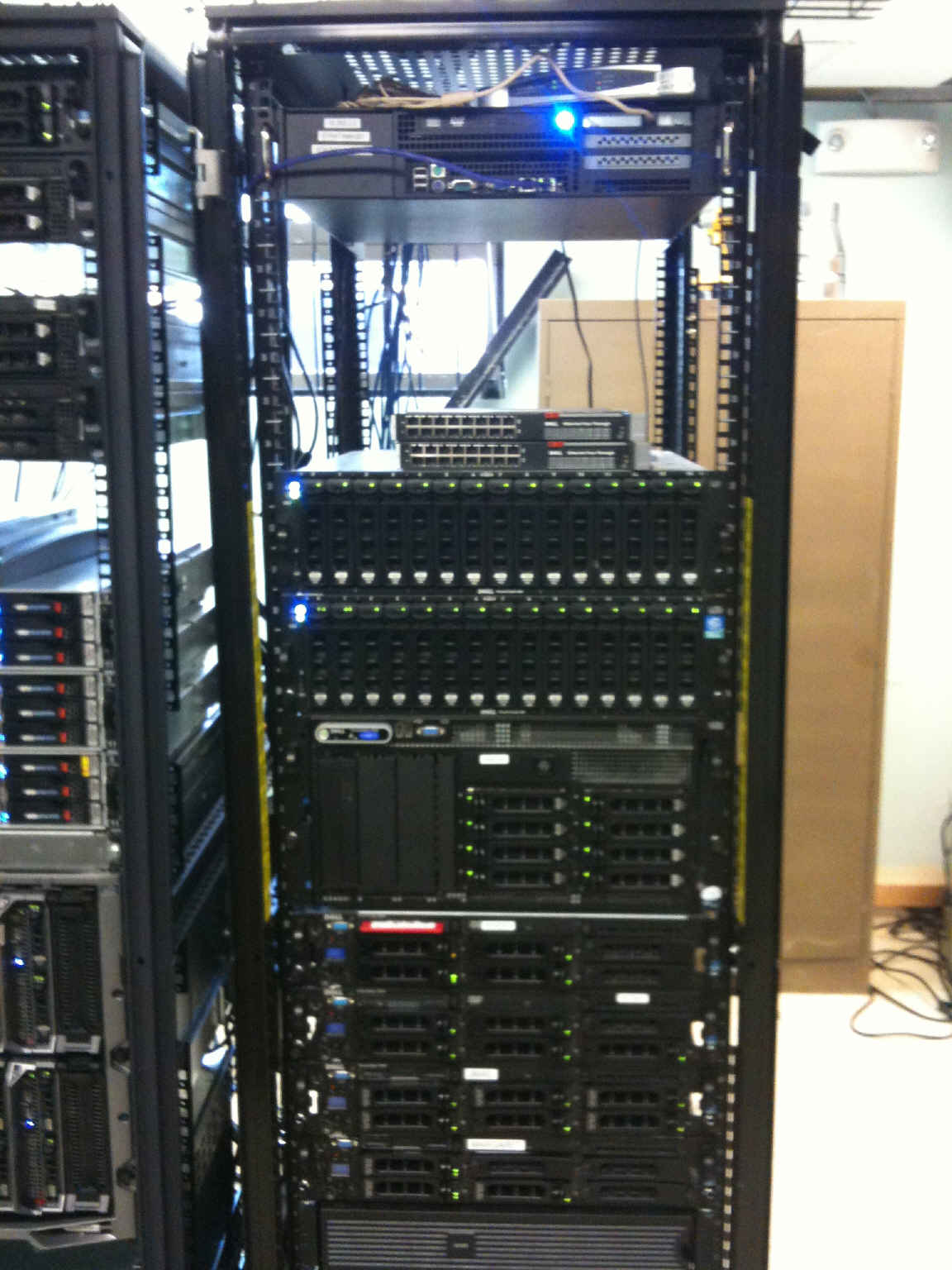 Improved cold air distribution In Figure B, you'll see green lines and boxes connected to the A/C unit (you can see the unit in Figure E); these are duct extensions that we installed in order to drop cold air where it's needed rather than just allowing cold air to blow randomly around the room. This move has already made an impact. Our Dell M1000e blade chassis fans used to run at a very high rate to keep the chassis cool. With this move, the fans run noticeably slower, meaning that the unit is having an easier time staying cool. Figure E 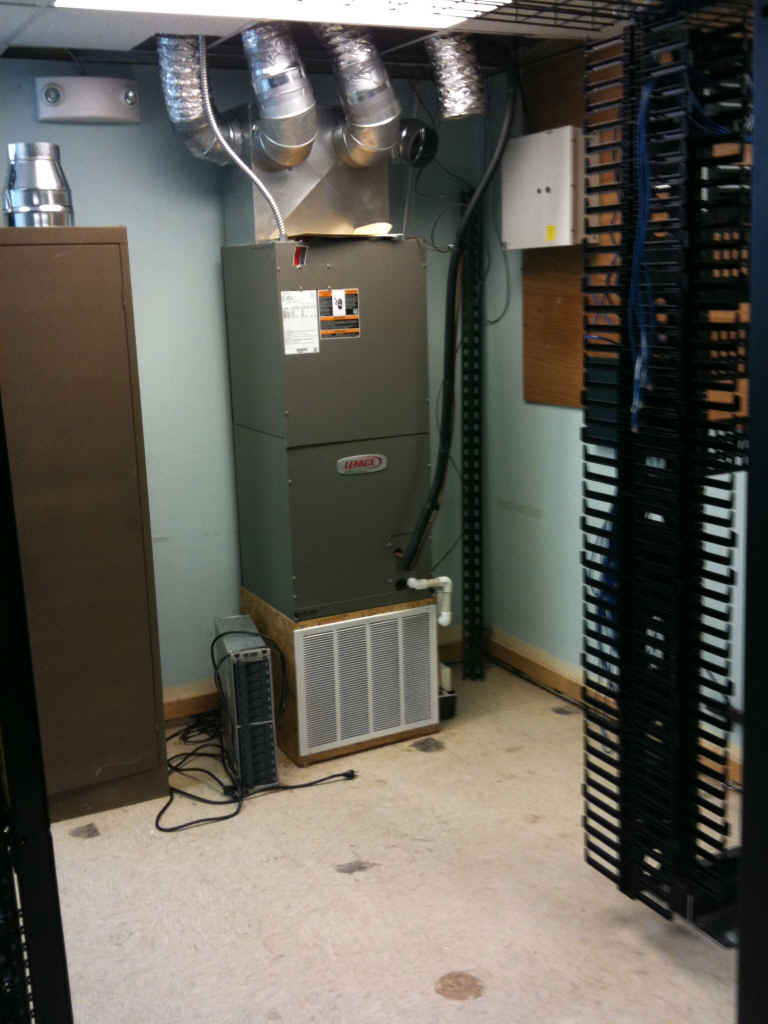 Added two new network/cabling racks In order to accommodate a large, new single mode fiber installation, we added a new rack (Figure F) to the left of the existing network rack and moved the core switch and all the network electronics to the new rack and left the older rack in place to house fiber optic terminations for the campus network. We've added quite a bit in the way of network gear, and we don't need to worry about having enough space to house it now. 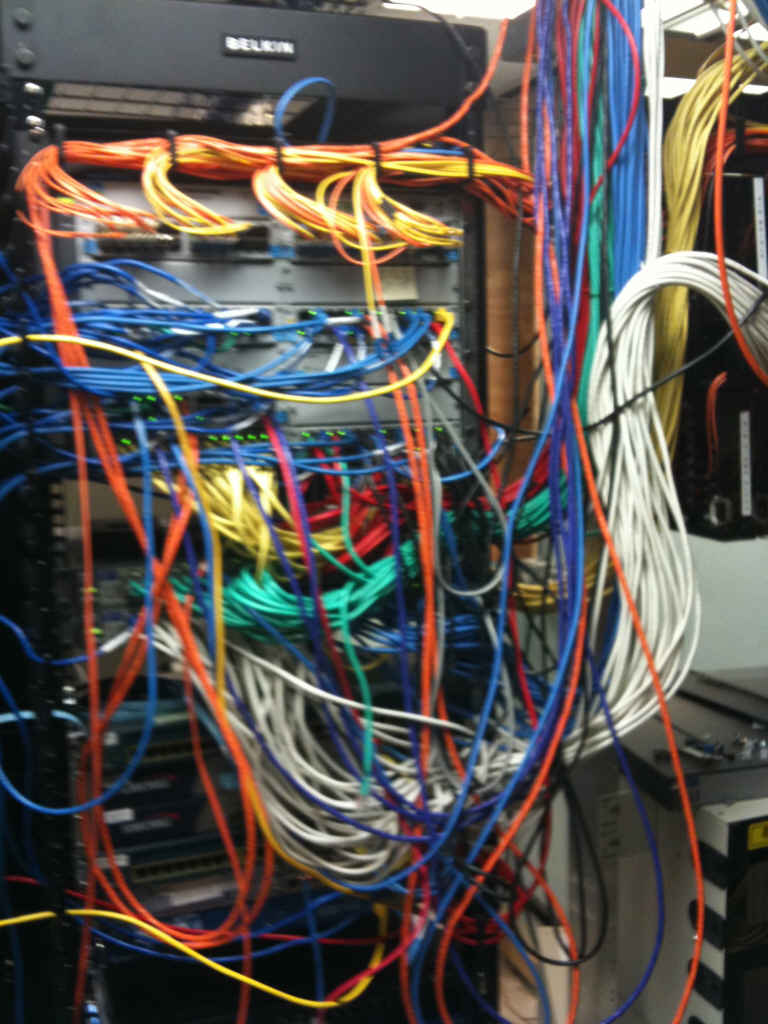 Behind the existing network rack, we've added a new rack (Figure G) intended to house all of the cabling for the building itself and get it away from the core network switch. The 150 patch cables that run into the core network rack seriously get in the way and are a pain in the neck to manage. We added the new rack when we renovated the IT office space across the hall and needed to re-run all of the network cabling into the space. This summer, we'll extend the existing patch panels to new patch panels in this common building rack and move the switches that service the building to this rack in order to be able to more easily work on the core switch. Although we don't have to do a lot with the core network rack, we want to make it easy work on it when the time comes. Figure G 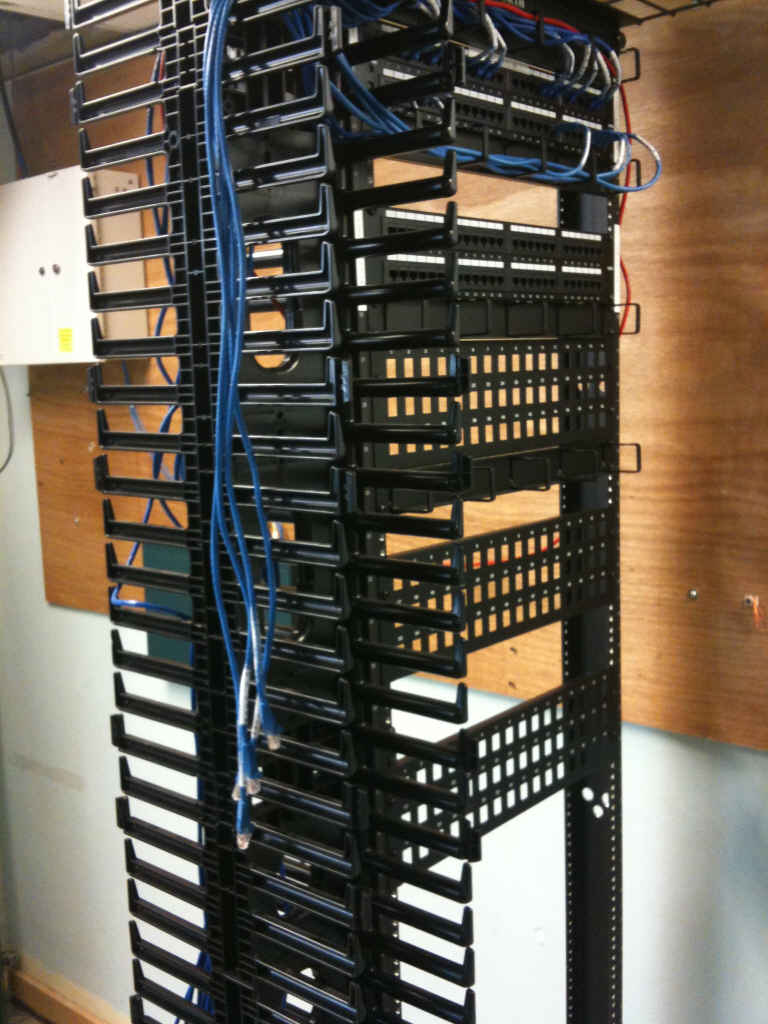 Added a cable tray If you look carefully at Figure B, you'll see a sort of thatched area on the diagram; this denotes a new suspended cable tray (Figure H) that we added at about 7' high in the room, or about 6" below the ceiling. We've also removed the patch panels that previously served the servers and instead laid the server connecting patch cables into this easy-to-reach cable tray. This step has made it much easier to make changes and add new cables as necessary; it has also made tracing cables a lot easier. Figure H 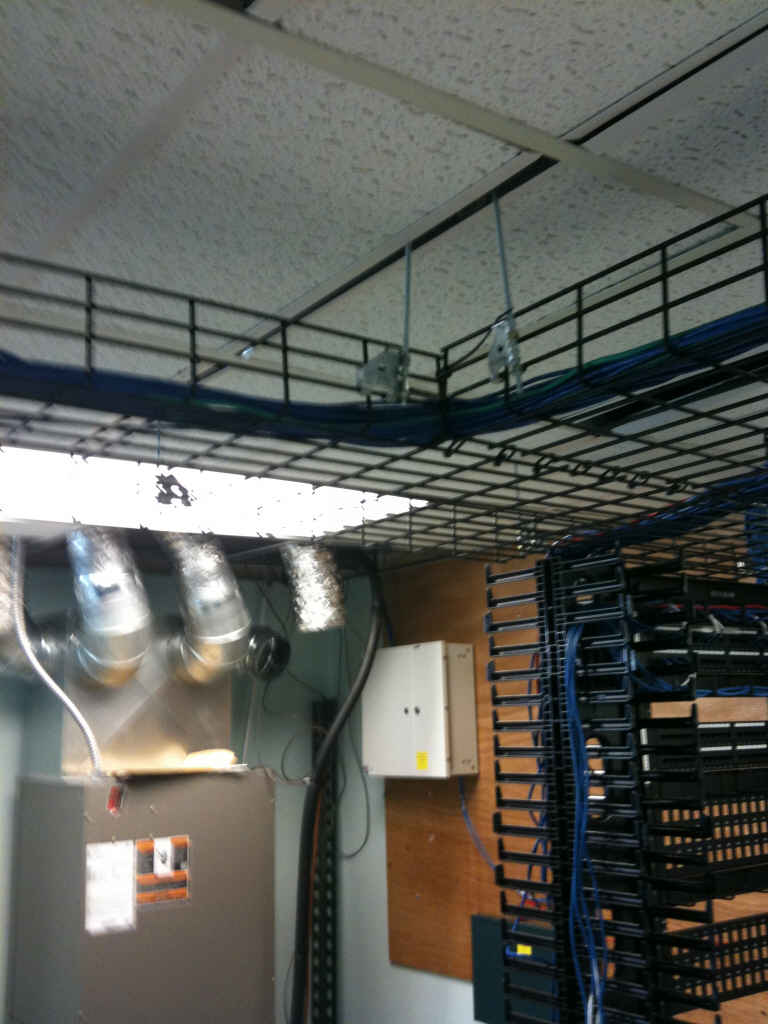 Cut the cord on the UPSs

In order to make it possible for us to more easily do routine maintenance on the UPSs and to move them if it became necessary, we had an electrician install massive power plugs in the end of the UPS cord. Prior to doing this, the UPSs were hardwired right into the electrical panel, so maintenance was more difficult.

We didn't make radical changes to the server room, but by correcting what were some relatively serious problems (particularly with air flow), we did create a very functional space. Westminster College is looking at the possibility of a new academic building, which may afford us the opportunity to build a true data center down the line.