New releases of software come out regularly and many organizations are not prepared to move to the next version. By using virtual technology, you can create a virtual network and test new versions of software within a testing environment controlled by virtual machines on a single computer. You can use this virtual environment to properly test the migration process or any other details involved with upgrading from an earlier version of your applicable software. You can do this from the comforts of one computer without any additional hardware. One of my favorite features of working with virtualization software is if something crashes, you do not have to waste time re-imaging a machine. You can revert back to a previous version of your virtualized system and start over again within minutes.

Another example would be to develop and test corporate Web sites across a wide range of platforms and browsers that may include Windows, Linux, Sun, Netscape, Internet Explorer, Firefox, Opera, etc. By using virtualization technology, you can install Linux, Sun, FreeBSD, and Windows operating systems all on a single computer. At this point, you can begin loading different browsers within each of these operating systems and start testing to make sure your corporate Web site works and that each browser in each platform can properly display it.

For example, you could load a virtual machine with Windows 2000 Professional and Internet Explorer 5 and load a virtual machine with SuSe Linux and Firefox and make sure your Website renders appropriately on both platforms right from your workstation PC. Prior to virtualization, you would need many different servers and workstations to create a proper test environment. By taking advantage of virtualization technology, all you need is one computer to handle all of your needs.

What virtualization software is available today? You have several options that a simple search engine can uncover. You can choose from a desktop line of virtualization products as well as an enterprise line of products. Regardless of the vendor, virtualization is hot and it is going to become more and more popular as awareness grows.

One of the most popular uses of virtualization is to create a multi-tiered configuration on a single desktop. In the past, you would have developers within an organization creating their code and testing it on a subset of Quality Assurance (QA) servers. This method often creates bottlenecks in your infrastructure. In addition to bottlenecks, there is the cost to constantly maintain a development set of servers.

By introducing virtualization on each developer's workstation, you now have the ability to create a multi-tier lab that consists of a Web server (Windows 2003 SP1 - IIS), database server (Windows 2003 SP1 -SQL Server 2000), and Workstation (Windows XP SP2) for code testing directly from one machine. Figure A. illustrates the above layout. This is just one example; a developer can choose to create any applicable multi-tiered configuration. 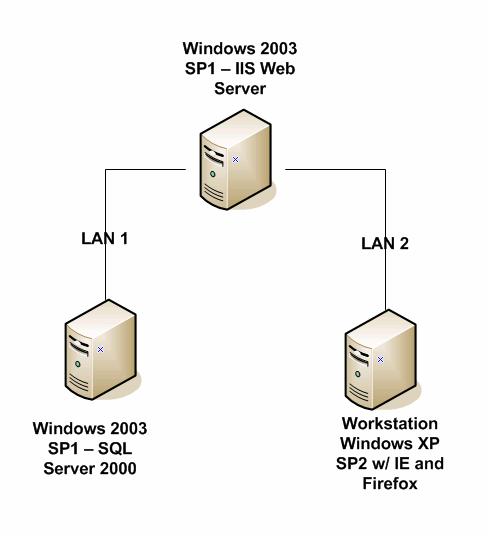 Let’s not forget about the single most important factor associated with the implementation of virtual machines—cost. By taking advantage of virtualization, you can reduce hardware costs by having multiple physical servers and desktops on fewer machines within your organization. For example if five developers are running server multi-tiered applications on a single computer, the company is saving money on the costs and administration of roughly 8-10 servers. By having fewer servers, you save money on electricity, air conditioning, maintenance, insurance, and leasing. Taken to a global scale, you can begin to see the bigger cost-saving picture.

As more and more organizations move toward systems that feature more than one platform, it is a must to be able to access both Windows and Linux quickly. Before virtualization became popular, you would have to have a computer that could boot to more than one operating system. Now, with virtualization, you simply can run Windows as your host machine and Linux as a virtual machine on one computer or vice versa. You can even take it a step further and network both machines to access each others' file systems.