If you are looking for a single application to replace Outlook you need look no further than Evolution. It is as feature rich, easy to use, and far more reliable than Outlook.

Within the open source -- and especially the Linux -- community, there are basically two options for replacing Microsoft Outlook: Kontact and Evolution. As you know, Outlook is an all-in-one e-mail, calendar, task, and contact application that also publishes information. In a corporate environment (especially a large corporate environment), most companies use an Exchange server to handle mail. If you are an employee in such an environment, and you want to adopt a Linux desktop you will be very limited in what you can do with an Exchange server. Will either Kontact or Evolution fit into your environment? Let's find out. 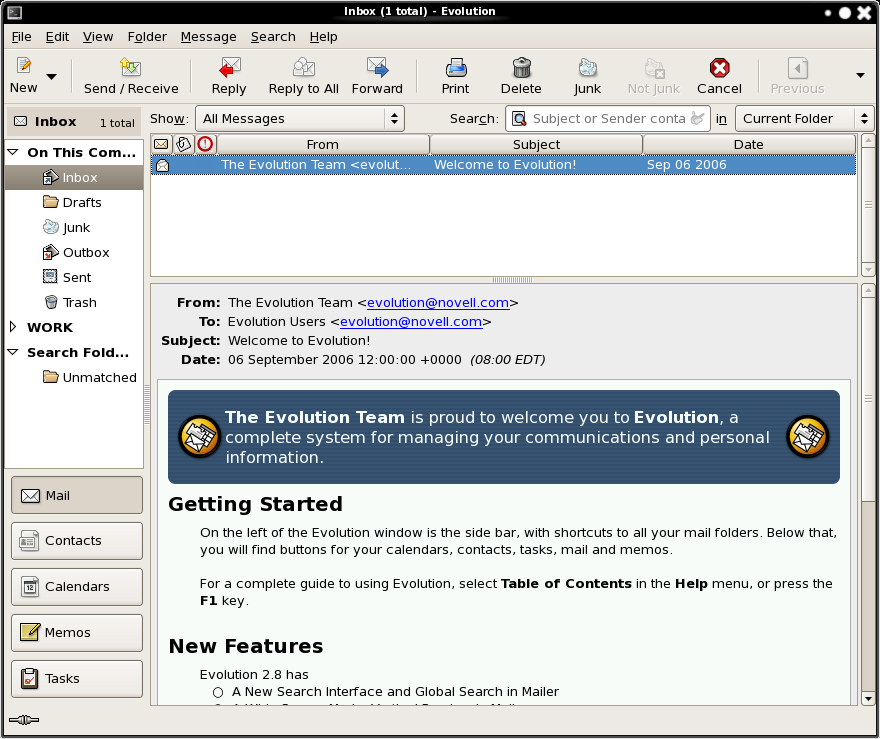 Evolution was started by the manic-brainiac known as Miguel di Icaza. His goal was to finally have an all-in-one that would make businesses give Linux on the desktop a serious look. He achieved his goal. Evolution comes packed with all the features you would expect in such a tool: Email, Calendar, Contact management, Tasks and Todo lists, Exchange support. Evolutions' standards support includes: IMAP, POP, SMTP and Authenticated SMTP, as well as Microsoft Exchange 2000 and 2003. And now that Exchange is "owned" by Novell it is enjoying GroupWise support (currently in beta.) Evolution also enjoys S/MIME support as well as Palm device support.

The Right Tool for the Job?

Evolution, the relief of administrators everywhere, acts and behaves very similarly to Outlook. So users will not suffer from much (if any) learning curve. The UI is intuitive and user-friendly. To the average user they probably wouldn't even notice if you exchanged their Outlook with Evolution. To the power user, well, that might be another story. One of my biggest beefs with Evolution, for some time now, has been the problem with PDA support. The gpilotd daemon has been nothing but flaky for the last several years. But that small price to pay does not detract from the power of Evolution. If you are looking for a single application to replace Outlook you need look no further than Evolution. It is as feature rich, easy to use, and (in my experience) far more reliable than Outlook.

Of course using Evolution to replace Outlook does come with this warning: Use with Exchange is not seamless. You may sometimes find that events aren't shared or invitations aren't received. This is to be expected with any software attempting to communicate with anything created by Microsoft. Expect a little flakiness now and again and you will not be upset.

View my screenshot gallery of Evolution.