Had you IT career turned out as you expected? In an IT Dojo poll, 76 percent of respondents reported their IT career being the same as or better than they initially predicted.

In a previous IT Dojo post, I asked TechRepublic members whether their IT career had turned out better, worse or about the same as they expected when first starting out. I was pleasantly surprised to learn that the vast majority, 76 percent, reported their IT career being the same or better than they initially predicted. 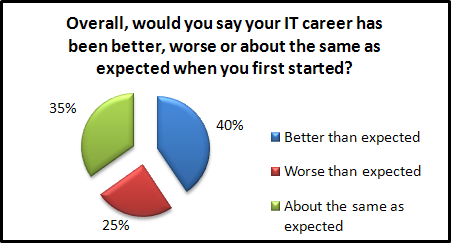 Although my poll was more a measure of career expectation than job satisfaction, I thought it would be interested to see how IT stacked up against other careers. According Tom W. Smith's report, "Job Satisfaction in the United States," 12 occupations rank highest in job satisfaction, see Table A. Smith used data from the National Opinion Research Center's (NORC) General Social Survey (GSS) to measure job satisfaction and general happiness.