Greg Shultz shows you how to use the free Windows 7 Logon Background Changer to customize your user experience.

Note: This article originally was publish on TechRepublic on February 9, 2012.

Back in February 2010, I wrote a blog titled "Change and Customize Windows 7's Logon Screen Wallpaper" that to this day continues to be a popular article. In that blog I told you that in order to make it easy for OEMs to customize Windows 7, Microsoft built the ability to change the Logon screen wallpaper right in to the operating system. Even though the technique that I explained in that article is very straightforward, it is still a manual procedure in which you must edit the registry, create folders, and copy files.

Well, I recently discovered that Julien Manici, an ingenious developer from Toulon, France, just released the final version of his free Windows 7 Logon Background Changer program that beautifully automates the entire procedure, even providing access to a nice collection of images that are hidden in Windows 7. Furthermore, the program has an awesome user interface that takes advantage of the Windows Presentation Foundation capabilities to create a very fluid selection operation -- reminiscent of the effect presented by Windows 7's Flip 3D feature.

In this post, I'll show you how to use Windows 7 Logon Background Changer. As I do, I'll tell you why I think this program is awesome.

Once you download the Windows 7 Logon Background Changer from the developer's site, you need to open the Zip file and either install the program or just use the executable file. If you choose to install the Windows 7 Logon Background Changer, you'll find that the program gets integrated into the Control Panel's Appearance and Personalization tool, as shown in Figure A. (This is just the beginning of this developer's resourcefulness.) Figure A 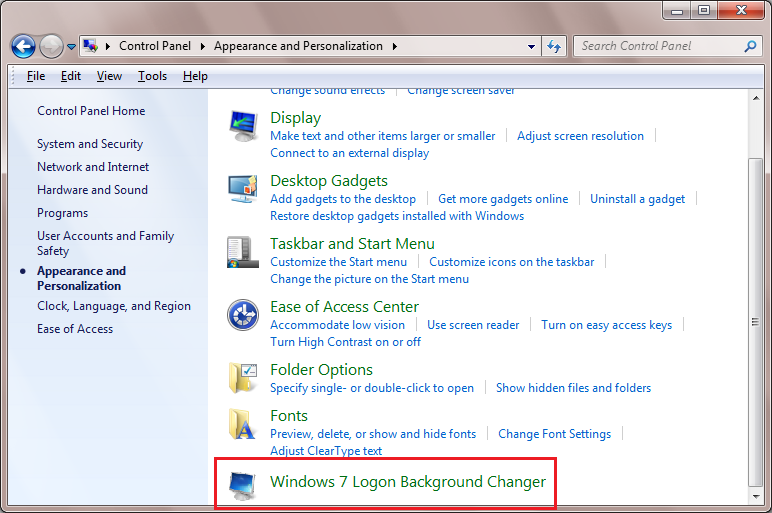 Installing the program into the Appearance and Personalization tool is a unique approach.

If you don't want to install it, just copy the executable file, Win7LogonBackgroundChanger.exe, to the folder of your choice. When you run the stand-alone executable file, you may see a Security Warning, but you can safely bypass it by clicking the Run button.

Once you have Windows 7 Logon Background Changer up and running, as shown in Figure B, you'll be amazed at the fluidity of the selection process. (I recommend clicking the Full Screen button to get the full effect.) The first thing you'll notice is a pulsing circle emanating from the center of the screen; this is a nice effect.

Across the bottom of the screen, you'll find an amazing set of pictures that you can choose from for the logon screen wallpaper. The Windows 7 Logon Background Changer pulls these images right from within the bowels of the operating system. Yes, that's right -- they come with Windows 7. As you may know, Windows 7 ships with a host of region specific themes. When you install Windows 7, it sets up those themes specific to your region in the My Themes section of the Personalization tool. The rest of the themes are on your hard disk but are not made available. 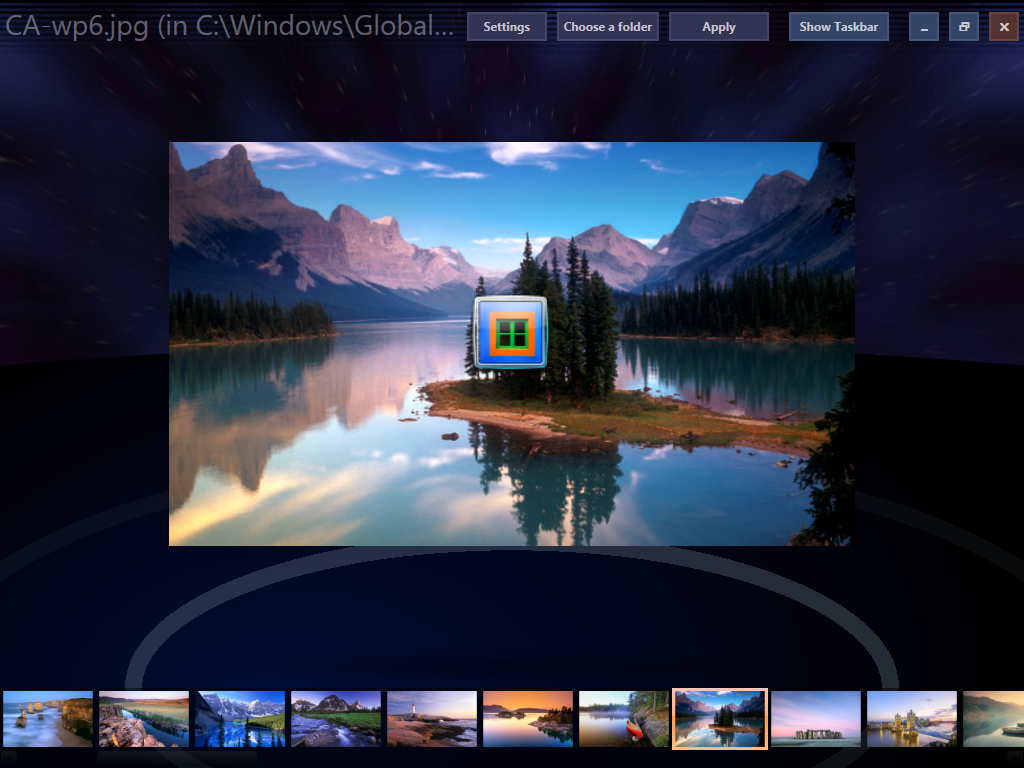 But Windows 7 Logon Background Changer reaches into the C:\Windows\winsxs folder and makes all these awesome images readily available for use as Logon screen wallpaper. (This is the second example of the developer's resourcefulness.)

The best way to cycle through the available wallpaper is to select the first image with your mouse and then use the right and left arrow keys to scroll through the images. As you do, you'll hear a pleasant sound effect and see the images rotate in a nice 3D animated circular motion to reveal the next one in the series on the flip side of the rotating image. This 3D animated effect was created by taking advantage of the Windows Presentation Foundation capabilities. (This is the third example of the developer's resourcefulness.)

Once you choose an image, just click the Apply button and the image will be configured as the Logon wallpaper, as shown in Figure C. It will take a few moments to set up the new logon wallpaper, but the orange progress bar keeps you apprised of the length of the operation. Figure C 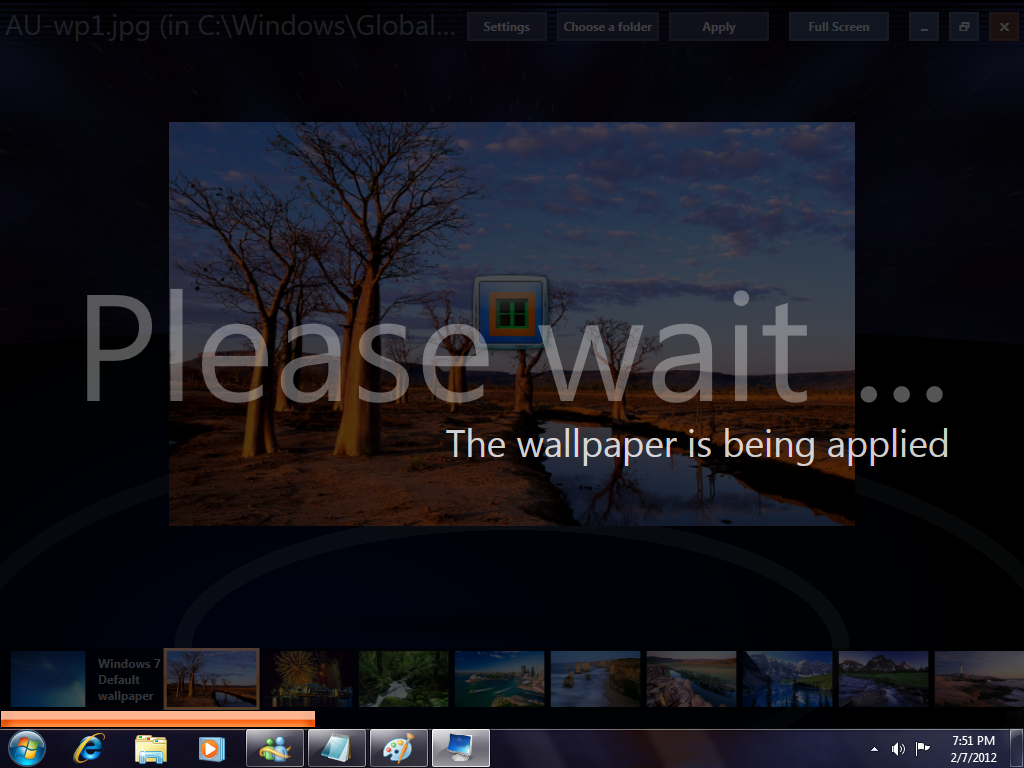 It will take a few moments to set up the new logon wallpaper.

Of course, you aren't limited to using the images from Windows regional themes. Just click the Choose a folder button and you can choose a folder of your own images.

If you read my 2010 article, you know that the button and the text used to identify your user account on the Logon screen have shadows behind them to give them a 3D-like look, and that the default shadows configuration works well with the default Logon screen wallpaper. Depending on what image you use for your new Logon screen wallpaper, those shadows might not work so well. If you click the Settings button, you'll see that you can adjust the shadow effect, as shown in Figure D. Figure D 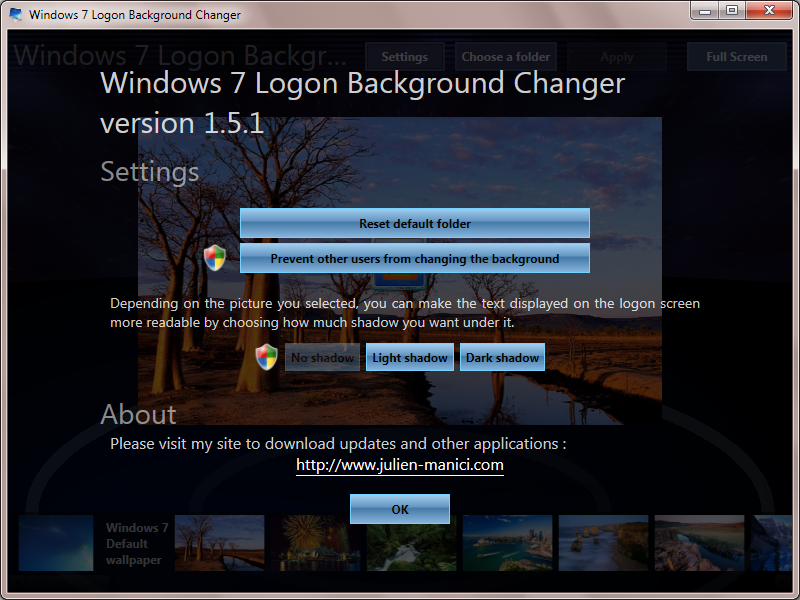 On the Settings page you can adjust the shadows used on the Logon screen's button and text.

Before you head to the discussion area to ask me why I am so excited about a program that performs such a simple task, let me explain.

When I first saw Window Flip3D and other cool animated effects such as the Live Taskbar in early versions of Windows 7, I was excited at the prospect that the Windows 7 developers would build more such 3D animated features into the operating system in order to really show off the capabilities of the Windows Presentation Foundation. But they never did. And then to see something as nicely designed as Windows 7 Logon Background Changer, well, it makes you wonder what could have been.

Just imagine other features in the operating system that could have been more exciting if they were programmed with a Windows Presentation Foundation-based user interface like the one in Windows 7 Logon Background Changer? For instance, take a look at the Personalization tool in the Control Panel. Imagine how different it could have been to select Desktop Background, Windows Color, or screen saver from a Windows Presentation Foundation-based user interface. How about looking at photos in the Pictures Library?

Have you used the manual technique to change the Logon wallpaper? Will you use the Windows 7 Logon Background Changer? As always, if you have comments or information to share about this topic, please take a moment to participate in the discussion thread below.