designed to be a Windows Vista monster, but in reality has turned out to be less

than impressive. Most of the problem can be attributed to the fact that Vista

computing, youre bound to be left behind while a product is still in beta.

I was reading Greg Shultzs article on the Windows System

Performance Rating in Windows Vista. This tool will give you an idea about how

your system performs. Just for kicks, I decided to run this on our test

system.  Heres how it turned out: 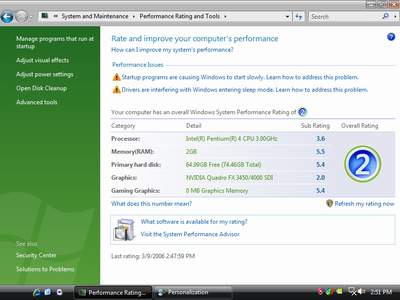 overall system performance. The key is to get as high a number as you can. The

This card is no slouch. Its a PCI-Express based card with

video editing, and other intense graphic chores. The problem is probably that

there are no Vista LDDM drivers available for it yet. I was able to get some

Beta 1 drivers that were higher performance than what I dealt with before, but

they still wouldnt support Aero Glass or other Vista features.

Shockingly, the CPU, a 3.00Ghz Pentium D 64-bit processor only

managed to score a 3.6 for system performance. What it would take to get a 5 or

better is kind of scary to consider. Probably with the advent of dual-core

CPUs, its going to be necessary to use one to get any decent performance from

supposed to measure video memory and even though my card has 256Mb on board, it

shows up as being 0. This too is probably a beta driver issue. I find the name Gaming

Graphics to be telling however.

Greg set up a discussion

check your performance and chime in. If youre interested in whats in Vista,