With a Windows Registry edit, you can add Google Docs to the entries listed in the Windows 7 New menu.

This tip was originally published in February 2012. With the release of Google Drive, the shortcut URL links used in February have changed. This is the revised version, which includes updated shortcuts. All the other steps in the tip remain the same. The Windows Registry modification file has also been revised and updated.

Previously, in the Google in the Enterprise Blog, I showed you how to create Windows desktop shortcuts for Google Docs. To take it one step further, I'll explain how to add Google Doc entries to the Windows 7 New menu using a registry hack.

I want to send out kudos to How-To Geek for giving me the idea. I used their article "How to Add Google Documents to the Windows Explorer "New" Menu," as the basis for this step-by-step tutorial. I made some changes to their described process that simplifies things just a bit. You can use this post and their article as a basis for your own unique circumstances.

Typically, in a tip that requires the editing of the Windows Registry file, I would lead you through the key creation process in the file itself, but for this tip that would be a very long process and would offer many opportunities for error, so I have provided a registry modification file for you to download. The Zip file includes the registry install file, an uninstall file, and a few icons that you can use. (The icons are available free from How-To Geek.)

After downloading the Zip file, extract the contents to its own folder. Copy the four icon files (.ico) to the Windows folder where the system can easily find them later (Figure A). 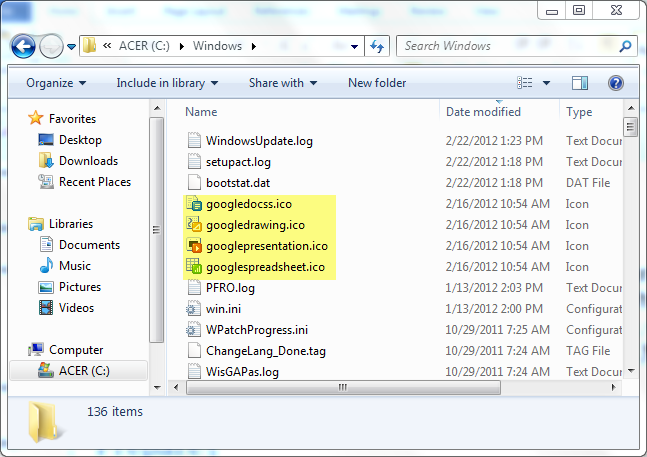 Copy the icon files to the Windows folder.

If you are interested in how the Registry modification works, open the AddGoogleDocsToNewMenu.reg file in Notepad by right-clicking it (don't run the file -- edit the file, as shown in Figure B). 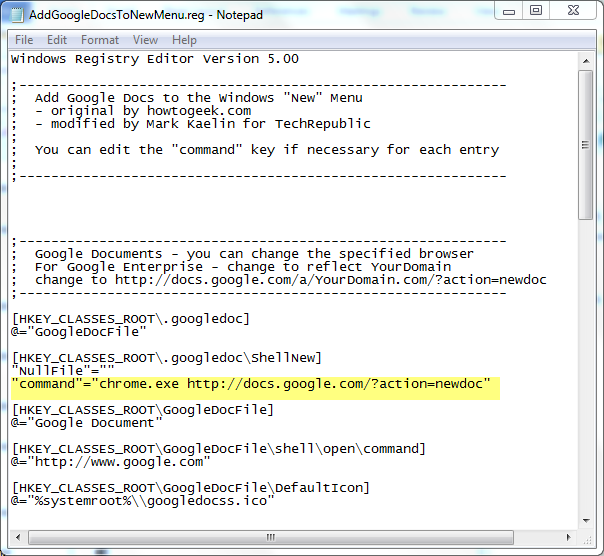 Edit the Registry modification file. Ignore the highlighted part of the image -- that link is different after Google Drive.

As you can see, we have to add several keys to the registry for each type of Google Doc we want to add to the New menu. The second entry in each section is where some editing may be required.

The command section specifies Chrome, but you can change it to your preferred browser. You may also want to change the command to reflect your domain by adding the appropriate path. The new command section would look something like:

Fill in the YourDomain placeholder, of course. After you are finished editing the file, save and then close it.

Right-click on an empty part of the desktop and navigate to the New menu. The typical Windows 7 New menu looks something like Figure C. This is the menu we are going to change. 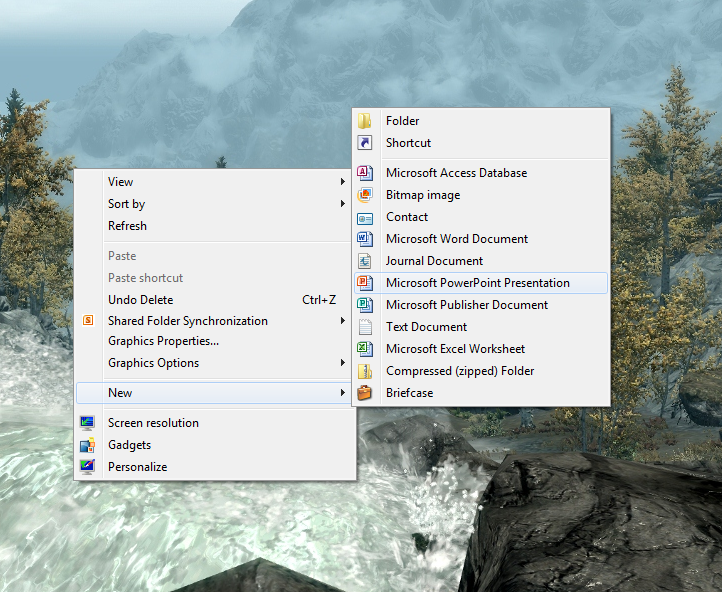 This is the typical New menu with no Google Docs.

Now, run the Registry modification file you downloaded by double-clicking it. You will have to appropriately answer several warning messages before it will work its magic.

Once it runs, the Windows Registry file will have been modified to include several new items on the New menu.

Note: You may have to refresh the Desktop to see the changes. Figure D shows you what you should see added to the New menu. 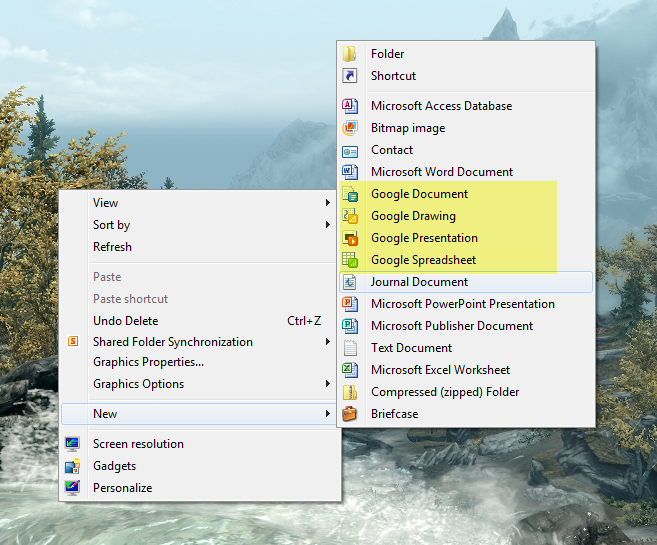 Now there are Google Docs in the list of New menu items.

If you later decide you don't want the Google Doc entries on the New menu, run the uninstall file (UninstallGoogleNewMenu.reg), and they will be removed.