In this issue of the Windows Desktop Report, Greg Shultz describes how the Windows 7 Live File System format works and how you can use it for backups or additional storage.

If you are looking to augment or expand your existing data storage options and you have a CD- or DVD-burner on your Microsoft Windows 7 System, then you need to investigate the Live File System format. This new system will allow you to essentially use a CD-RW or DVD-RW disk just like a USB flash drive. In other words, you'll be able to incrementally add individual files or groups of files to the disc over time.

In this issue of the Windows Desktop Report, I'll describe how the Live File System format works. As I do, I'll show you how you can use it to your advantage for backups or additional storage.

Keep in mind that while I'll be focusing on Windows 7, the Live File System format feature is also available in Windows Vista.

For example, if you use a CD-R, DVD-R, or DVD+R disc, you can only add files to the disc -- you can't actually delete files from the disc. On the other hand, if you use a CD-RW, DVD-RW, DVD+RW, or DVD-RAM disc, you will be able to both add and actually delete files from the disc. Furthermore, you will be able to erase the entire disc and start fresh.

When you insert a blank optical disc into an RW drive, you'll see one of the AutoPlay dialog boxes shown in Figure A, depending on the type of disc you are using. As you can see, by default AutoPlay assumes that you will be formatting a data disc. To continue, you can press [Enter] or click the Burn Files to Disc button. 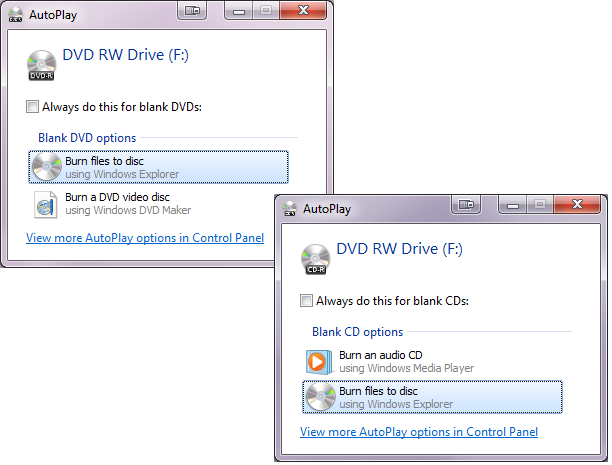 The default option in the AutoPlay dialog box is set to format a data disc.

You'll then see the Burn a Disc dialog box, as shown in Figure B. As you can see, in addition to giving the disc a name by filling in the Disc Title text box, you can choose one of the available formats. Based on what I have told you so far, it is obvious that the Like a USB Flash Drive option is the Live File System format. If you want to create a permanent disc, you would select the With a CD/DVD Player option. This option will create what is called a Mastered disc. 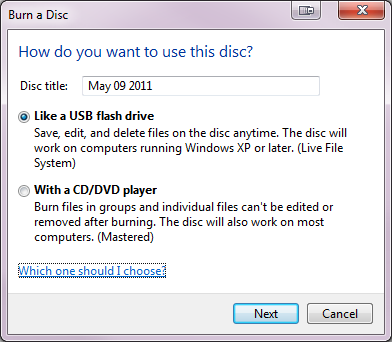 To create a Live File System format disc, select the Like a USB Flash Drive option.

When you click Next, Windows 7 will begin formatting the disc, and you'll see a dialog box containing a progress bar that will keep you apprised of the format operation, as shown in Figure C. In most cases the format operation should take only a few moments.

The format operation shouldn't take more than a few moments.

When the disc is formatted, you can open Computer and see that the disc is now available and ready for use, as shown in Figure D. As you can see in the Details Pane at the bottom of the window, the disc was formatted as UDF and has 4.37 GB available for use. 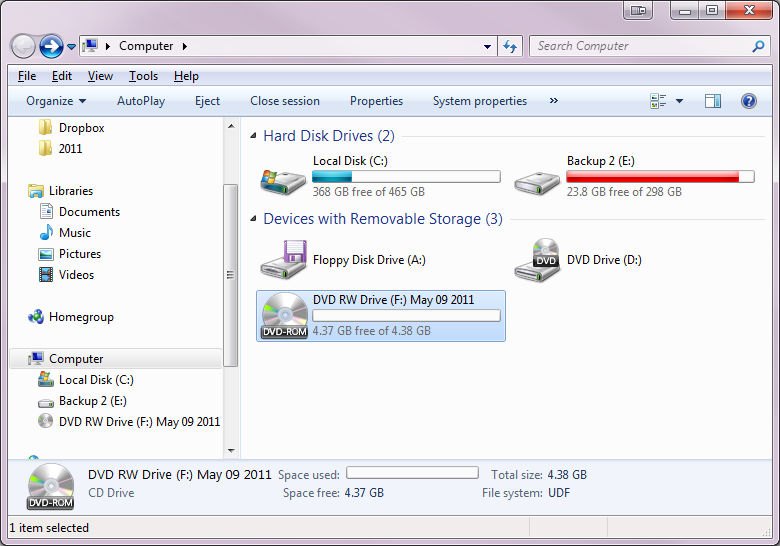 After the disc is formatted, you can open Computer and begin using it just like you would a USB flash drive.

If you open the new disc, as shown in Figure E, you'll see the Drag Files to This Folder to Add Them to the Disc message at the top of the file pane, and you can begin copying files to it just like you would a USB flash drive. 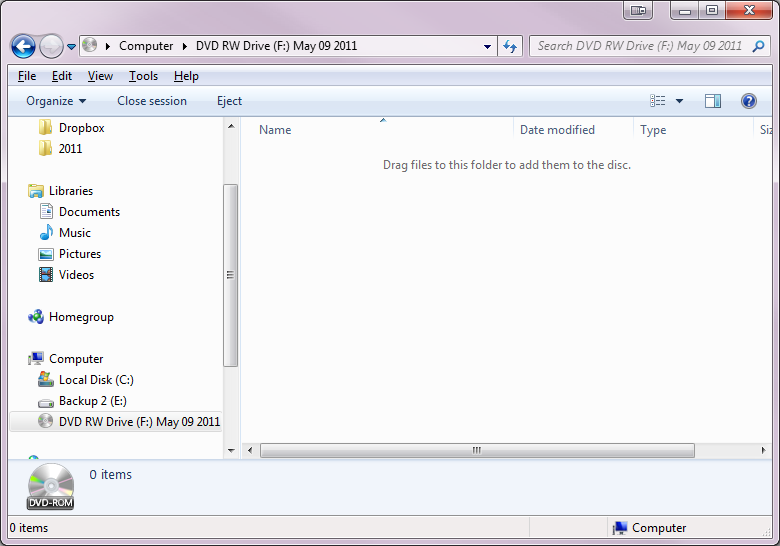 If you open the newly formatted disc, you'll see a message that informs you that the disc is ready for use as a storage media.

When you copy files to an optical disc formatted with the Live File System, it will take a bit longer than copying files to other disks due to the extra overhead involved in implementing the Live File System file-by-file burn operation. As such, you'll see a progress bar that will keep you apprised of the operation, as shown in Figure F.

Copy operations will take a bit longer to complete, and you'll see a dialog box with a progress bar.

Another difference you'll notice when using an optical disc formatted with the Live File System is that it will take a bit longer to eject the disc. In fact, when you open the disc drive drawer, you'll see the Preparing to Eject message appear in the Notification area, as shown in Figure G. It's at this point that Windows 7 is closing the open burn session and performing other tasks that will allow the disc to be accessible for future burn sessions as well as making it readable on other systems.

When you eject an optical disc formatted with the Live File System, Windows 7 will close the burn session.

Later, when you insert the disc again, what you'll see will depend on what kind of files you have on the disc. For example, if you have text documents or executable files, a folder window will open and you can get right to work. If you have other file types on the disc, such as graphics or photos, you'll see an AutoPlay dialog box and will have to respond accordingly. You can then copy other files to the disc or delete existing ones.

As I mentioned, if you are using a CD-RW, DVD-RW, DVD+RW, or DVD-RAM disc, you will be able to erase the entire disc, format it, and start fresh. Just right-click the drive and select the Erase This Disc command, as shown in Figure H. You will then follow along with the Burn to Disc wizard to erase all the files on the disc, which will finish in a few seconds. 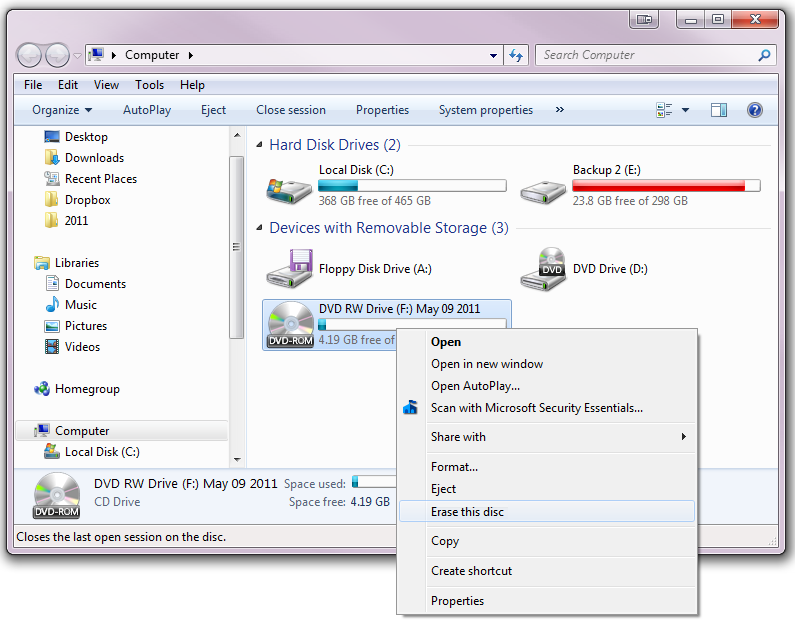 If you are using a CD-RW, DVD-RW, DVD+RW, or DVD-RAM disc, you will be able to erase the entire disc and start fresh.

What do you think about Windows 7's Live File System for optical discs? Have you used it? If not, will you begin to use it?