Using the Microsoft Windows 7 voice recognition application is a very effective tool for reducing stresses that cause repetitive motion disorders.

Hi, I'm Tim Heard, and I'm not a Mac. I'm also not a PC, and Windows 7 was definitely not my idea. I wish it had been. Instead, during those dark times that I refer to as "The Vista Years," most of my thoughts dealt with issues such as what sort of harm I would do to myself if I punched a hole through the monitor of my daughter's PC, and the form of punishment the Vista development team deserved for inflicting such torment on society with their product. (Russian gulags generally seemed most fitting.)

Admittedly, my frustration was such that I wasn't practicing what I preach. I'm generally all about trying to understand what the other person might be going through and forgiving them for real or imagined wrongs that they may have done to me.

Case in point, last night I spent several minutes telling my younger daughter about Armando Galarraga forgiving the umpire whose call cost him a perfect game. This came up after an umpire called a strike in her first ever at bat when it was about a foot over her head, resulting in her striking out with really only two strikes. I also told her that even if she HAD struck out, it would've been OK, and talked about how Babe Ruth got on base only about a third of the time. (Nobody knocks it out of the park every time.)

As it turns out, the folks at Microsoft got a chance to redeem themselves in my eyes, and I'm really glad that events turned out the way they did. Windows 7 basically bailed me out of a tough spot and allowed me to stay pretty productive at work when otherwise I probably would have struggled to get much done.

Without going into too much history, about six months ago it started to become apparent that I was going to need to have surgery on my left elbow and wrist, and eventually also on my right wrist. (Carpal tunnel damage in both wrists, and compression of the left ulnar nerve.)

I have experimented with a variety of alternatives over the years designed to minimize the stress on my hands. These have included ergonomic mice, trackballs, and an assortment of elbow pads and wrist supports. With so much of what I do for a living depending on my ability to communicate in writing, I started researching voice-recognition solutions: both as a means of staying productive and as a means of diminishing the wear and tear on my hands over the long run.

It didn't take me long to learn that Dragon Naturally Speaking (DNS), from Nuance Communication, Inc., is the dominant player when it comes to voice-recognition software. However, there are a lot of options available now that didn't exist even just a few years ago. (A number of people have shared links with me, which I'll post below.)

Several people informed me that Microsoft Windows 7 incorporated voice recognition into its functionality. At the time that I was doing my research, versions of DNS ranged from around $100 to around $900. Since then, Nuance has come out with a newer version and also dropped its prices. Still, it seemed to me that Windows 7 was worth checking out, since for the price of Dragon Naturally Speaking (the high-end business version), one could buy a good desktop PC or make a significant down payment on a good laptop.

Fast forwarding just a bit, it was about a month ago that I had my surgery. When I got home, I was wearing a splint that extended from the end of my hand up to just below my armpit. Additionally, for about twelve hours after the surgery, I couldn't feel a thing in my arm or hand. Thanks to a nerve block, I couldn't even wiggle a finger on my left hand. However, after the cobwebs cleared, I was able to compose and respond to e-mails throughout the day despite having only turned on the voice-recognition functionality of Windows 7 and browsing the tutorial the day before.

At this point, I really need to stop and say a word of thanks to the folks at Lenovo. When I contacted them to say that I was working on an article idea about Windows 7's voice-recognition capabilities, they were kind enough to loan me a T410s ThinkPad. While this article isn't about the laptop, the ThinkPad does have a few features worth mentioning that might be of interest to anyone with range-of-motion-related disabilities (Figure A). 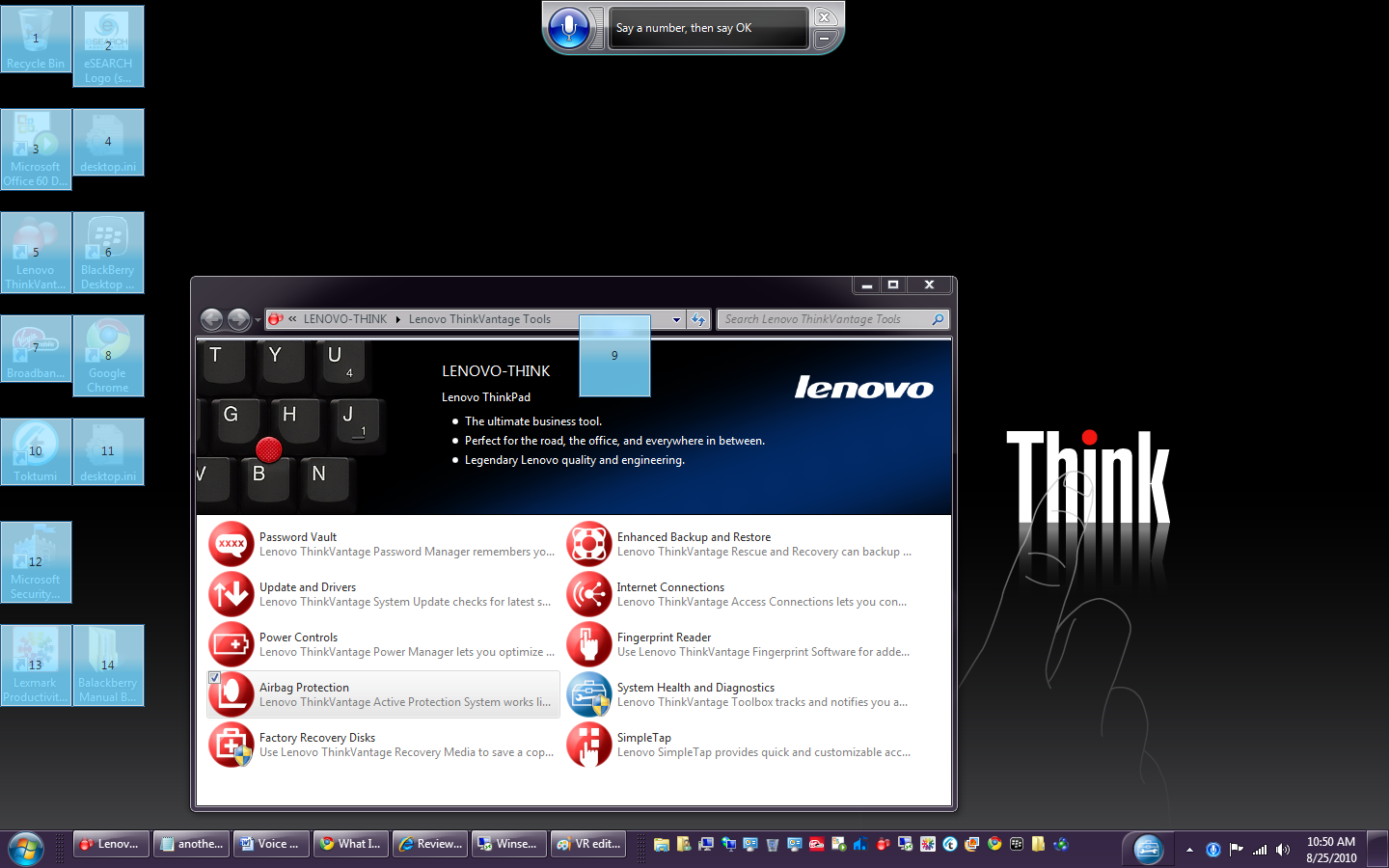 For me, having a nice, big, track pad was very helpful. The ThinkPad also has touch-screen technology, which I think I would have used a lot more if I'd had it longer. Also of note, it is very sturdy, has a spill-resistant keyboard, and has what Lenovo calls "air bag" protection, in case you drop it. While I didn't put any of these elements to the test, even after my surgery, I still have one hand that's mostly numb when I wake up each morning, so working with a laptop that's resistant to drops and spills is a plus. (I really can't emphasize enough how much I appreciated the loan of the ThinkPad. It was a very legit product demo, but the timing turned out to be ideal, from my perspective.)

Getting back to Windows 7, while my exposure to Dragon has been very limited, there seem to be a lot of similarities in terms of their functionality. Like DNS, Windows 7 is capable of "learning" and improves over time. In part, the system learns to recognize how we pronounce different words. Additionally, though, you can add custom words (Figure B and Figure C). 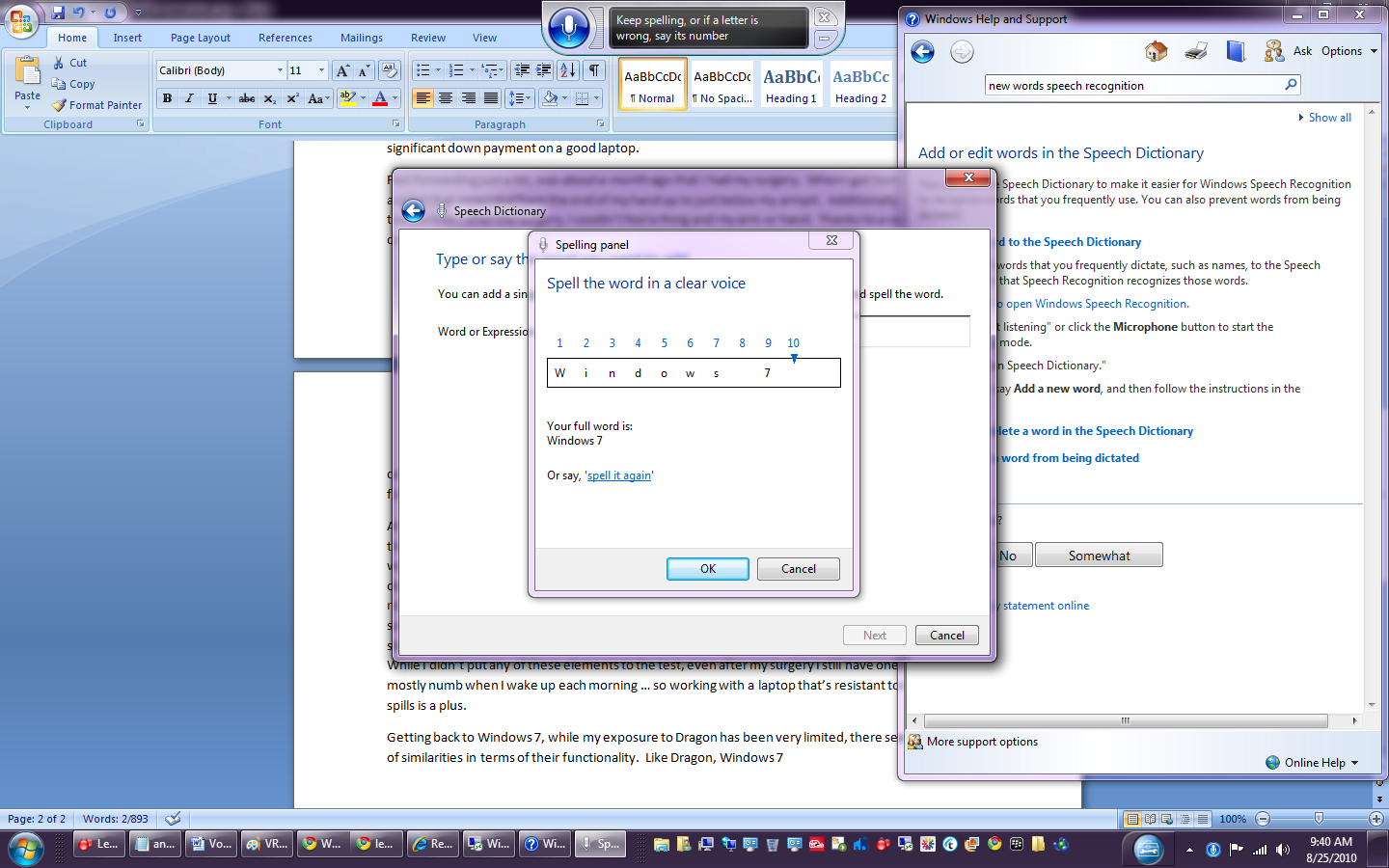 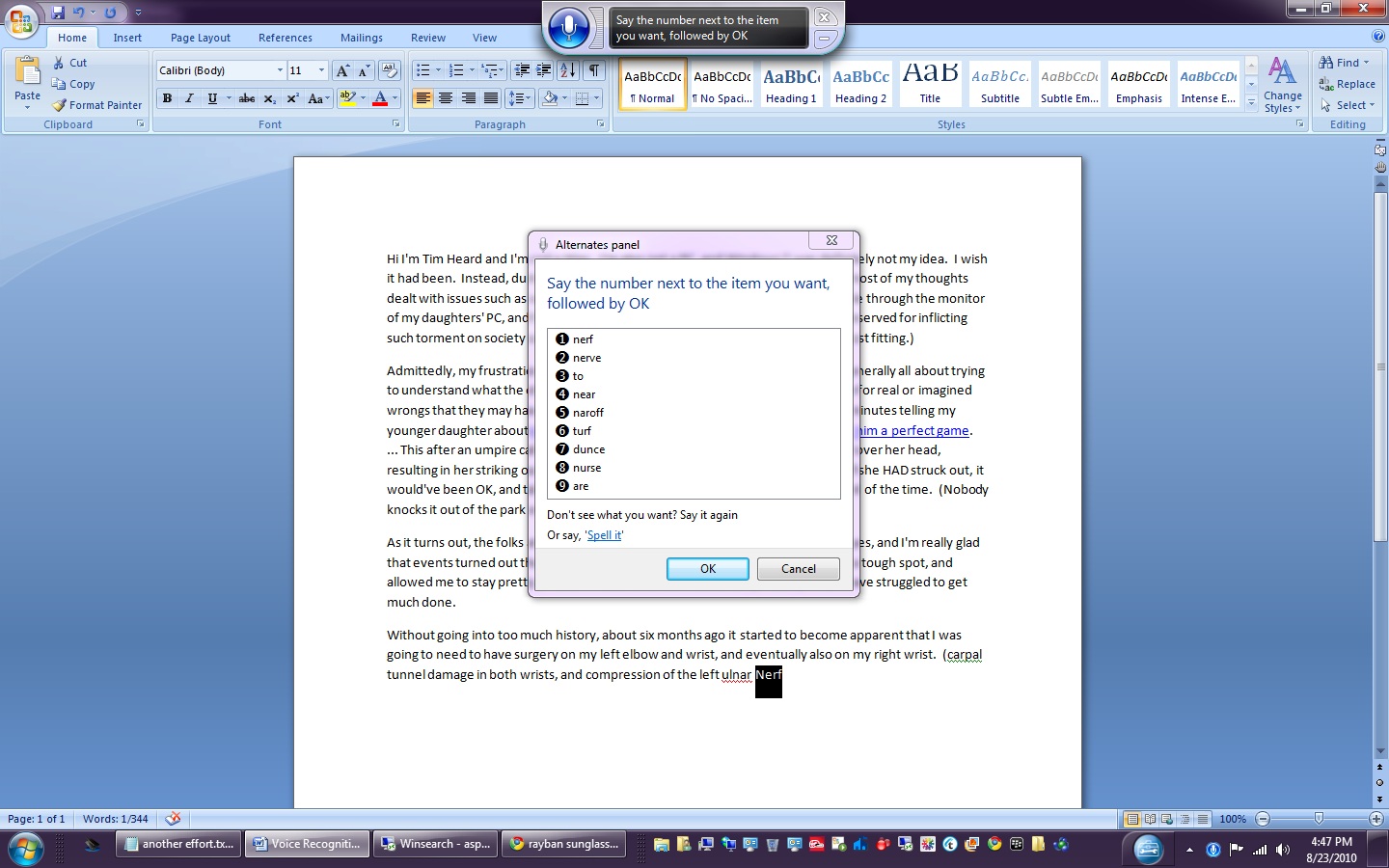 Also, like the higher-end version of Dragon Naturally Speaking, Windows 7's voice-recognition capabilities are not just for dictation. It offers a range of commands designed to help you run any program that's loaded on your computer.

However, on occasion you run into instances in which Windows 7 just can't figure out what you're trying to do or where you want to click. In those instances, the commands "Show Numbers" and "Mousegrid" can be very helpful. I use the Mousegrid command on a regular basis when I'm accessing another system using Remote Access (Figure D). 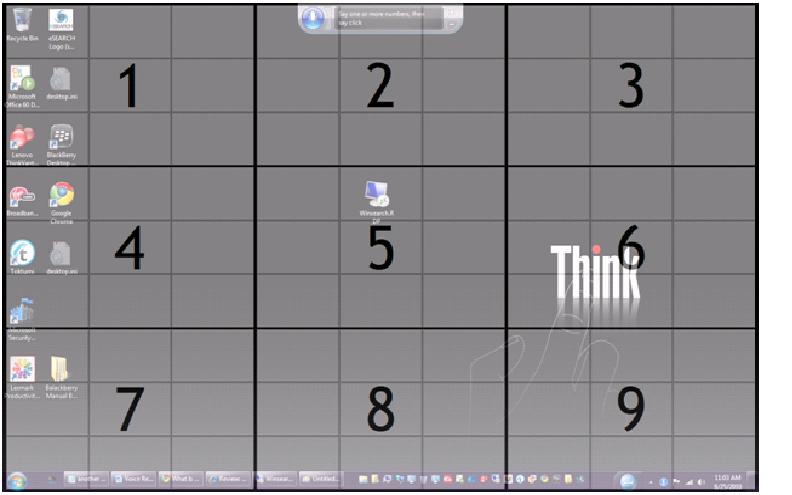 Using the Mousegrid command, a user can keep narrowing the selection until the pointer is on exactly the spot where he or she would like to click or insert text.

If you already have Windows 7 on your PC and are thinking of giving it a try, I'd recommend that you invest in a good microphone. I'm told that the quality of the mike one uses makes a huge difference.

A few other observations

If you feel like you're experiencing early symptoms of a repetitive stress injury like carpal tunnel damage, be aggressive early about trying to do something about it. Voice-recognition software might be part of that solution, but there is also a lot of relatively inexpensive tools that you can use as well ergonomic mouse pads, track pads, mice, and wrist supports. It's likely, too, that if you work for very large company, they can hook you up with someone to evaluate your situation and give you some good advice. TAKE THE ADVICE! The alternative is very unpleasant.

I'm definitely motivated to make the change. I wrote about 95% of this article using Windows 7 voice recognition.