Greg Shultz shows you how to install and use the Windows 7 Folder Background Changer to personalize your operating system.

If you used Microsoft Windows 98, chances are good that you remember that operating system's Customize This Folder wizard, which allowed you to customize your folders by setting different backgrounds and choosing a text color. A friend of mine was reminiscing about that capability the other day and asked me why this feature wasn't one of the many bells and whistles in Microsoft Windows 7.

He really liked to be able to customize certain folders back then, as it helped him to organize content. I told him about Windows 7's Content view, which makes keeping track of multimedia files easier. He quickly replied that Content view wasn't the same as the Windows 98 feature, and I knew he was right. Since I had no quick comeback, I sulked off.

Later, while doing a bit of researching on the Internet, I encountered a nice little program called the Windows 7 Folder Background Changer, which was developed for The Windows Club website by Kishan Bagaria. This neat little program runs as a standalone application and works in both Windows Vista and Windows 7.

In this edition of the Windows Desktop Report, I'll show you how to install and use the Windows 7 Folder Background Changer. I'll also briefly revisit Windows 98 and take a look at the Customize This Folder wizard -- just for old time's sake.

The first option allowed you to configure the folder like a Web page complete with links, and while that was a very cool feature, not many folks took advantage of it. The most popular option was to use a background image. 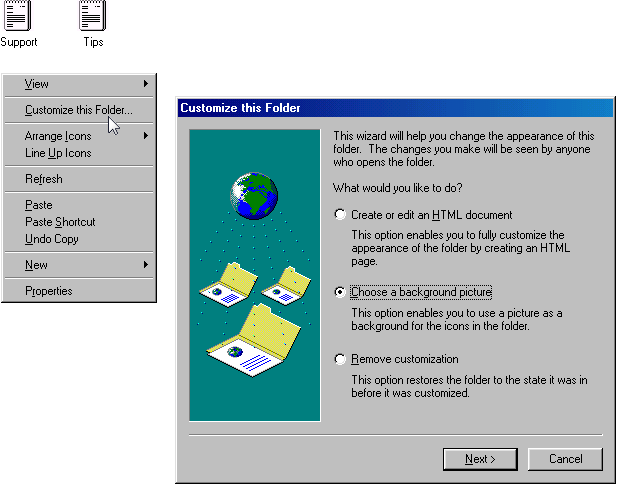 Using the Customize This Folder wizard you were able to set background images for folders in Windows 98.

Once you selected that option, you would then be prompted to select a background image for the folder, as shown in Figure B. You could select from the available images in the list or use the Browse button. You could then change the text color to balance the display and keep the text readable. 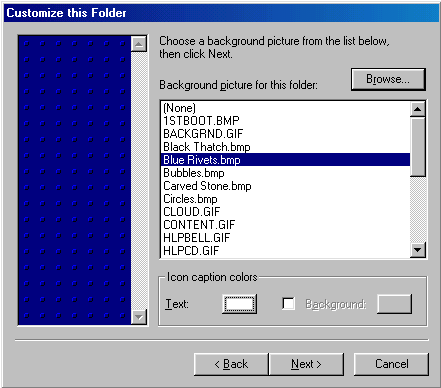 In addition to choosing an image, you could alter the text color.

When you finished, you would have a unique looking folder, as shown in Figure C. 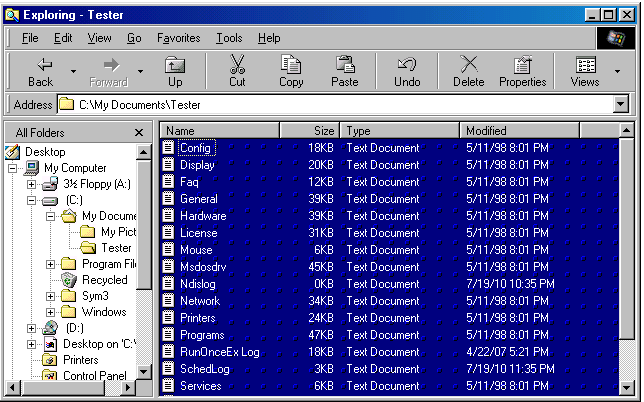 This feature allowed you to create unique looking folders in Windows 98.

You can download your copy of the Windows 7 Folder Background Changer from The Windows Club Web site. Once you get the Zip file and extract the executable file, you can run it directly -- there is no installation procedure. Right-click on the file name and select the Run as Administrator command, as shown in Figure D. When you do, you'll have to interact with the UAC. 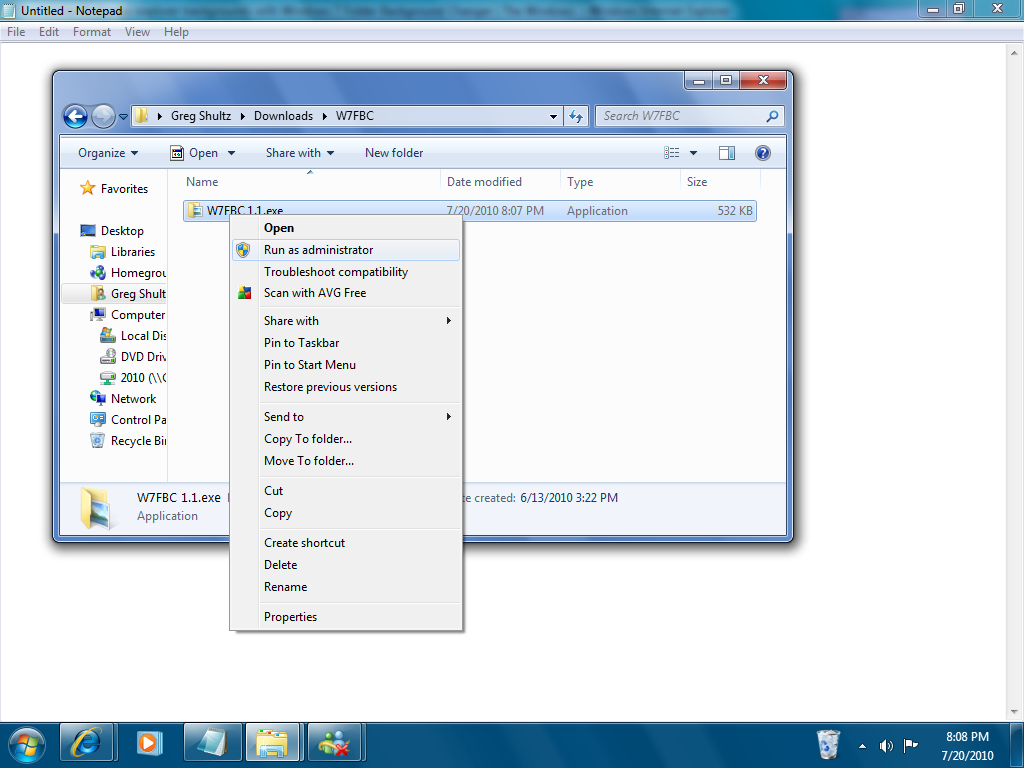 You must run the Windows 7 Folder Background Changer as an administrator.

When the program runs, you'll see its straightforward user interface, shown in Figure E, and can immediately get to work customizing your folders. Note that the first time you run it, the program will restart Explorer.exe in order to make the necessary arrangements for it to be able to customize your folders. However, you won't really notice any interruption.

The Windows 7 Folder Background Changer is very easy to use.

To begin, you'll click the Browse button and select the folder that you want to customize. When you begin browsing, you'll discover that you cannot select the Libraries folder. As you can see in Figure F, the OK button is unavailable when you select Library. You'll also notice that this Browse for Folder dialog box doesn't provide a New Folder button, so you'll have to have already created any folders that you want to customize. 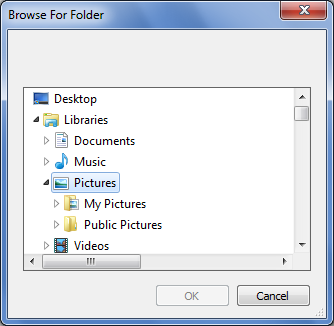 You'll use a Browse for Folder dialog box to choose the folders that you want to customize.

After you select the folder that you want to customize, click the Change Background Image button. You'll see a standard Windows Browse dialog box, and you can easily browse for and select the image that you want to set as the background of the selected folder. As you do, keep in mind that for the best display, the size of the image should be in relative proportion to your current screen resolution.

For example, on my test system, the screen resolution is 1024 by 768, so a photo taken with my digital camera that is 2272 by 1704 only displayed the top right section of the picture as my folder background. After copying the image and experimenting with various sizes, I discovered that reducing the size of the image to 800 by 600 works best for a folder background on my system. That size allows me to view the entire image in a folder when the window is maximized, yet still looks good at a smaller size.

Of course, you'll want to resize your images according to your screen resolution for optimal display. However, as a general rule I found that resizing images one notch down from the screen resolution works very well.

Depending on the color of the image that you select, you'll want to adjust the color of the text so that you can still easily read file names and other pertinent file information. To do so, just click the Text Color box to open a standard Color palette dialog box, as shown in Figure G, and then select or create your own color. 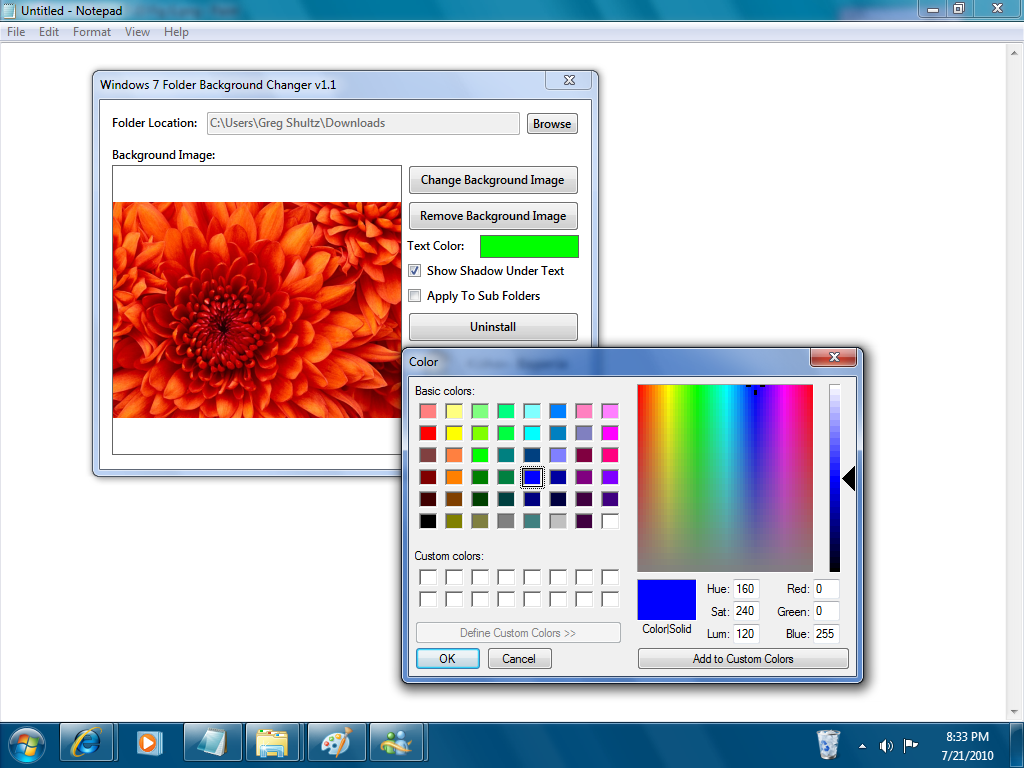 You can choose a text color from the color palette.

Below the Text Color box, you'll see that you can add shadows by selecting the Show Shadow Under Text check box and apply the color scheme to any subfolders. You'll also see the Uninstall button, which you can use to remove the color scheme.

While the Windows 7 Folder Background Changer does a great job of reviving the ability to add color to your folders, there are a couple of things that I found annoying. First, the program's window remains in the foreground like Task Manager does. As such, it blocks your view and can get in the way. It would be nice if it had a minimize button.

And speaking of buttons, it would be nice if the Windows 7 Folder Background Changer had Apply and OK buttons. If you select an image for the background, the folder immediately pops up and the image appears as the background. However, if you change the image, you have to change directories and then back again before you see the new image. When you are done using the program, you have to click the Close button in the top right corner to exit the program.

As always, if you have comments or information to share about this topic, please take a moment to drop by the TechRepublic Community Forums and let us hear from you.