For Deb Shinder, the Consumer Preview of Windows 8 both delights and infuriates. She explains which features push what buttons.

Computer users, including Microsoft's strongest advocates, often have a long-standing love/hate relationship with the company's products. Windows in its various incarnations has always been capable of both delighting and infuriating the customer -- sometimes at the same time.

I've been working with the consumer preview of Windows 8 and have found that, so far, this experience is no exception. One moment I'm in awe over how cool a given feature is; the next I'm scratching my head and wondering "Why in the world did they do that?"

All in all, I'm excited about Windows 8 -- especially its potential on tablets -- and, of course, I realize that a consumer preview by any other name is still a beta, so I don't expect the software to function perfectly. So I'm not complaining about things like the occasional random app crashes that throw me back to the Start screen, or sometimes to the desktop, for no apparent reason.

What infuriates me are what seem, to me, to be basic design flaws or an egregious dysfunction in some of the features that should have been a focus for showcasing the coolness of this first chance that most of the public will have to get their hands dirty with Windows 8. And in many cases, it's the little things that make or break the operating system experience.

Keep up with all the news about Windows 8.

What time is it?

Okay, this is a very small thing, but it's a lot of small things that add up to the total user experience. The Windows 8 lock screen -- the one that you swipe up to see the configured accounts and pick one to log on -- has a nice, big clock that displays over a picture of your choosing. I like that.

What I don't like is that when I'm on the actual Start screen, the time is nowhere to be found. Oh, if I swipe the charms bar out from the right side of the screen, then a clock displays temporarily, but I'm used to having the time in view all the time. I have that on my Windows 7 desktop (or Windows 8 when in desktop mode). I have it in the notification bar on my Android phone.

I figured that should be easy enough to fix. Just install a Clock app, right? There are dozens of them in the Android Market. Unfortunately, even though it would seem to be one of the most basic of all apps, I couldn't find one in the Windows Store.

Speaking of the Windows Store, my experience with it has been one of the more infuriating aspects of using Windows 8. I'm not talking about the fact that there are so few apps available, although I would have expected more to be released in conjunction with the consumer preview.

I think the Store is a good idea. Consumers have grown accustomed, due to their iPhones and Droids, to having a centralized place to get applications. As long as Windows 8 will still run software from other sources, I'm all for the Store. But the Store doesn't work very well for me in the consumer preview. Sometimes when I click to install an app, it does, but sometimes it doesn't.

Sometimes it's the apps themselves that are disappointing. For example, I installed the WordPress app, expecting something like the WP app on my Android phone, which has a really nice interface for writing blog posts, creating and editing pages, changing blog settings, and uploading photos or videos to my WordPress site.

The Windows 8 WordPress app is just a bunch of links to some "featured" WordPress blogs, with no way to interact with my own blog. I kept it because it has a pretty live tile that displays graphics from those featured blogs, but I'm hoping we get a full-fledged WordPress app by the time Windows 8 is released.

I expected a "real" Facebook app to be one of the first things available, too. The People app connects to Facebook and it's interesting, but the way the information is presented is awkward to navigate and gives me both more and less than what I want to see if I'm checking Facebook.

There's a solution (but once again, it's not immediately obvious to everyone): open the IE app, go to your Facebook page, tell IE to remember the password, then select the "Pin" option on the bottom address bar and pin Facebook to the Start screen. This will take you directly to Facebook (using Bing). So maybe a Facebook app isn't so important, after all.

While you were looking for that elusive Facebook app, though, you might have discovered that how to search the Store isn't obvious at first; you have to invoke the charms bar (pretty easy with a touchscreen, not so much with a non-touch monitor), click the Search icon (or charm) there, then scroll down to click "Store" in the list. It actually works well once you know what to do, but in the beginning it's not intuitive, and I anticipate some yelling and screaming about there being no way to search the Store when newbies start using this.

Searching for Search in all the wrong places

Speaking of search, people coming to Windows 8 from Windows 7 will miss the Start button with its Search box (in Windows 8 desktop mode, choosing Search from the Start right-click menu dumps you back into Metro). People who are used to pre-ICS Android phones (and let's face it, most Windows computer users aren't using Windows Phones) will miss the Search button at the bottom of the screen.

Search isn't the only "missing button" that I fear will infuriate some users. When I first started using Windows 8, I kept looking for the Back button. If you're using a computer with a Microsoft keyboard, you soon discover that the Windows logo key performs this function -- sort of.

It takes you back to the Start menu. Some apps give you a Back button from some pages. (If you're looking at a category of apps in the Store, there's a back arrow at the top to go back to the Store's "front page.") Others don't, and you find yourself having to go all the way back to the Start screen to start over.

That's more a matter of poor design on the parts of the app developers than Microsoft's fault, and it's no doubt just a consequence of those developers not yet really being used to how the OS works. Still, some users will blame Microsoft if they have a poor experience with Metro apps, since after all this whole Metro thing was their idea.

Update: After working with the Windows 8 consumer preview a bit more, I discovered that there is the functional equivalent of a "Back" button, but it's not at all intuitive, so many users may not stumble across it for a while. If you hover in the upper-left corner of the screen, you'll see a mini version of the previous screen you were on, and clicking that will take you back to it. Kudos to the dev team for putting this in there, but I'll take a few points off for making it so obscure.

This won't be the first time Windows users have been frustrated by Microsoft's attempts to make its products more secure. UAC in Vista drove users crazy and was arguably one of the top reasons for that operating system's lack of popularity.

On the one hand, I'm delighted that with Windows 8, Microsoft is obviously taking security more seriously than its tablet competitors are -- even when the security mechanisms infuriate me. Setting up my email accounts with the Windows 8 mail app was a case in point. A bit ironically, setting up Gmail was a piece of cake. However, when I went to set up my Exchange account, it was a "no go." The problem? I needed to install the Exchange certificate on the Windows 8 device.

Now I knew that, because I know how Exchange works and I've encountered the problem many times before. But the infuriating part is that it gave no clue about what the problem was -- just said "cannot connect to the server." Would the average user have any idea that it was a certificate issue? After installing the certificate and rebooting the system, Exchange finally worked.

Here's the kicker: When I try to set up the same Exchange email account on an iOS or Android device, I get a notice that a certificate is missing and I get the option to go ahead and connect anyway. That's easy and convenient and delights the user, but it's not so great for security. Microsoft is doing the right thing here, but they need to do it in a way that won't infuriate the user and cause him/her to conclude that "this thing doesn't work." 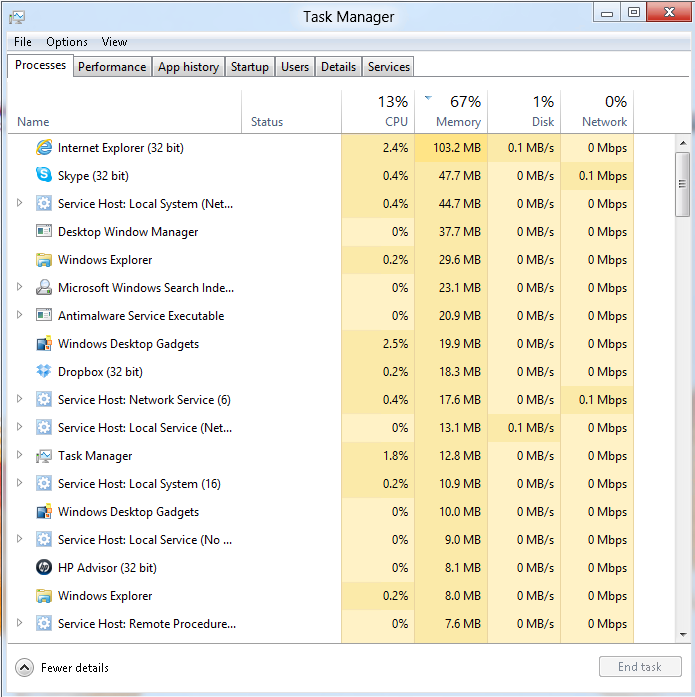 Afternoon delights and sins of omission

There are plenty of things in Windows 8 that I unabashedly love. Those include the new Task Manager, the beribboned Explorer, side-by-side mode in Metro (a huge improvement over the one-app-at-a-time experience in Android and iOS), and the ability to configure the taskbar and wallpaper to work properly with multiple monitors without installing a third-party program such as MultiMon. 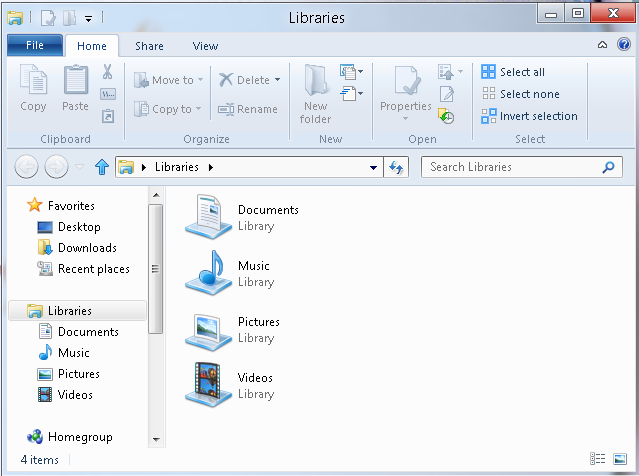 I also really like Internet Explorer 10 so far. It's fast, both in Metro and in desktop mode. I also like the zoom feature on the Start screen, whereby you can zoom out and more easily arrange your tiles.

There are also some frustrating aspects to Windows 8, things that feel too much like Apple and its locked down, walled-garden approach. I like those live tiles, but I'd like the ability to configure them more to my preferences. Instead of selecting one basic theme color, I'd like to be able to color code my tiles for better organization of my apps and pinned items. I'd like to be able to make some of them larger or give some of them graphic backgrounds, as the app developers can do.

It's all small stuff

When I was much younger and more prone to get upset about things, an older and wiser friend once told me there are two keys to a happy life: 1) Don't sweat the small stuff, and 2) It is all small stuff. Over the years, I've come to realize that he was almost right. About 99% of it is indeed small stuff.

And at least that percentage of the annoyances and quirks that I've discovered in Windows 8 are "small stuff," too. Many of them will undoubtedly be fixed in the final release. Others will turn out to have workarounds, or in practice, once I'm used to the interface, they just won't come up nearly as often.

Nonetheless, Microsoft shouldn't shrug off the complaints of testers and reviewers of this consumer preview. Small stuff matters, and to some people, it matters a lot. Attention to detail is an important factor in winning over consumers; the success of the iPhone and iPad proved that. I believe Microsoft has a potential winner in Windows 8, if they take care of the little things.