If you use the Backup Files option in Microsoft Windows Vista's Backup and Restore Center, then you know that unlike the Backup Utility in Windows XP and the backup tools in all previous versions of the operating system, the Backup Files option in Vista doesn't allow you to specifically select the files and folders that you want to back up. Instead, it provides you with only a set of file categories to choose from, as shown in Figure A. 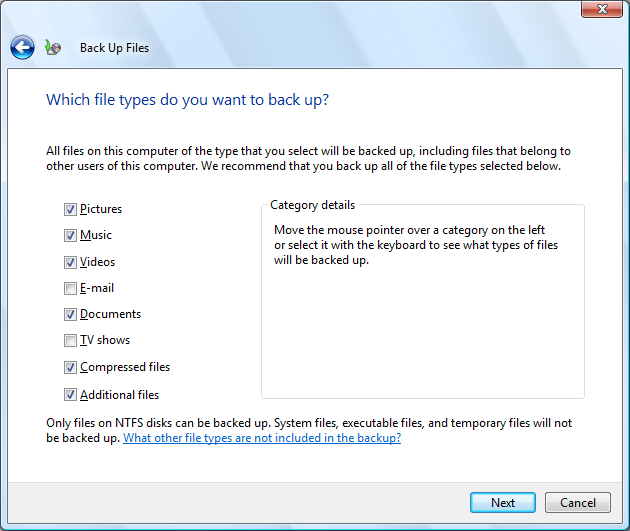 Vista's Backup Files option will not allow you to specifically select the files and folders that you want to back up.

In Windows 7, Microsoft has retooled the backup utility and bought back the ability to choose exactly which files and folders you want to back up. In this edition of the Windows Vista and Windows 7 Report, I'll show you how to use Windows 7's Backup and Restore tool to back up the files and folders that you choose.

Note: Keep in mind that this is a Release Candidate version and that the look and features of Windows 7 that I will discuss here may very well change between now and the time the operating system is actually released. 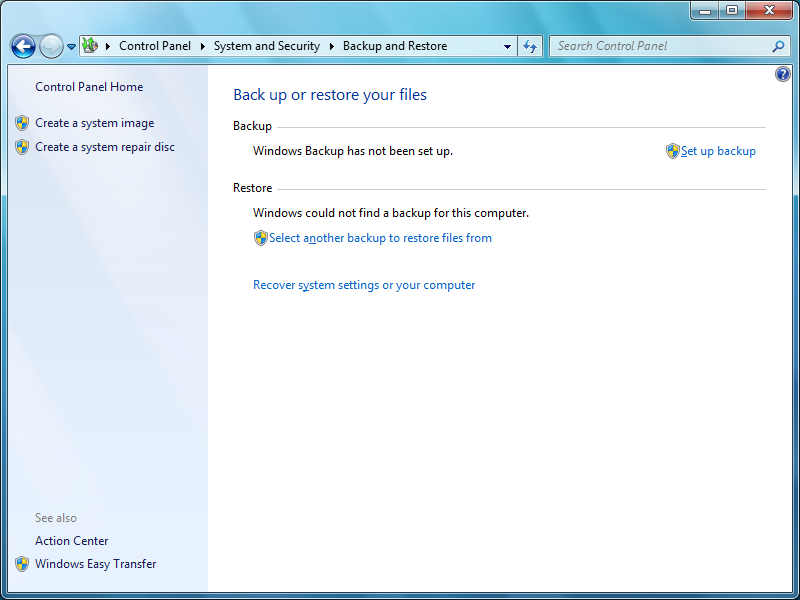 As soon as you launch it, Backup and Restore is ready to back up files.

You'll notice that like Vista, Backup and Restore also provides you with a hard disk imaging utility that can create an image file that contains the complete contents and structure of a hard disk. Another new feature in Backup and Restore allows you to quickly and easily create a system repair disk. I'll cover these other two features in future editions of the Windows Vista and Windows 7 Report.

Backing up your files

The first thing you will need to do is click the Set Up Backup button. When you do, Backup and Restore (which internally seems to go by the name Windows Backup) will search your system for available backup devices and then display the first window in the Set Up Backup wizard, as shown in Figure C. 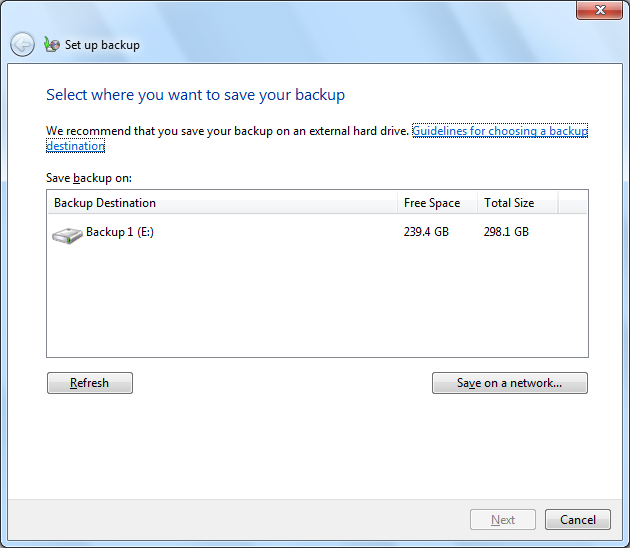 When Backup and Restore finds the backup destination, select it and click Next.

When the second window in the Set Up Backup wizard displays, as shown in Figure D, select the Let Me Choose option. By default, the Let Windows Choose option is selected and will automatically back up all files in Windows 7's libraries: Documents, Pictures, Music, and Videos as well as the folders: AppData, Contacts, Desktop, Downloads, Favorites, Links, Saved Games, and Searches. 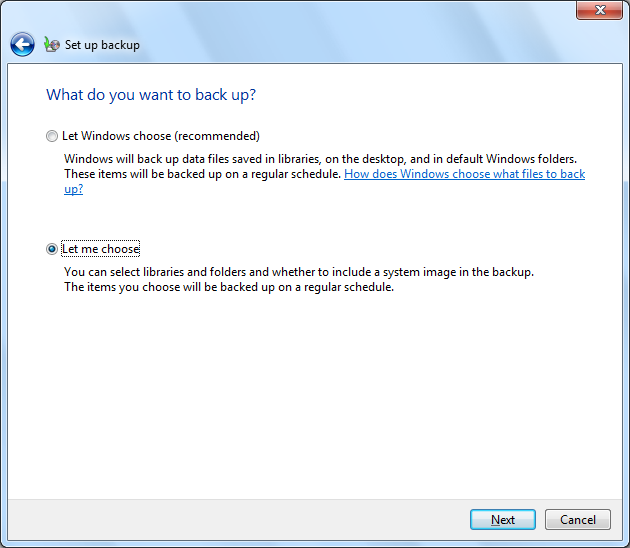 When you click Next, you'll see a folder tree, as shown in Figure E, and will be able to drill down to and select any folders that you wish to include in your backup. You'll notice that by default all your libraries are included. If the backup drive is formatted using the NTFS file system and has enough space, a system image is automatically included in the backup by default. 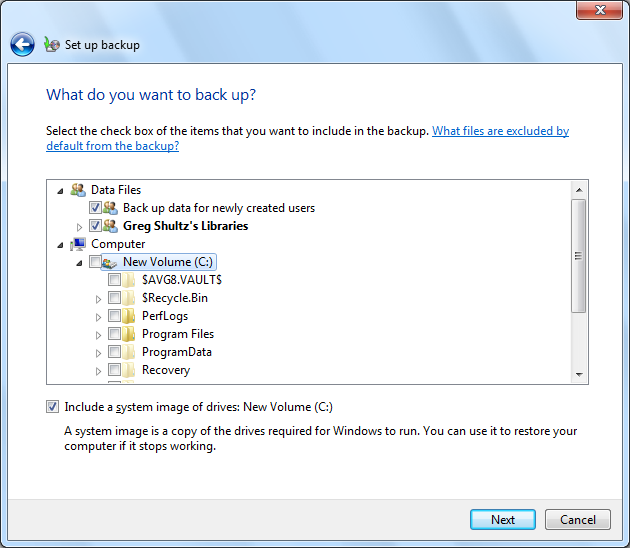 Using the folder tree, you'll be able to drill down to and select any folders that you want to include in your backup.

When you click Next, you'll be prompted to review your backup settings as well as change the backup schedule, as shown in Figure F. To begin the backup of your selected files and folders, click the Save Settings and Exit button. 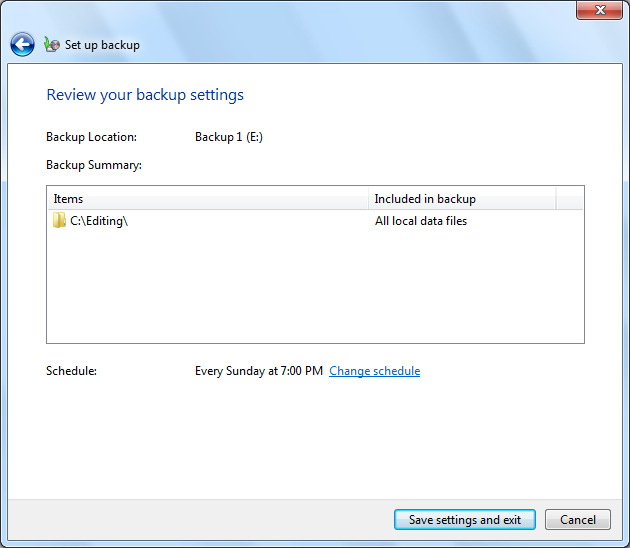 You can review your backup settings as well as change the default backup schedule.

When you do, you'll see the Backup and Restore window, as shown in Figure G, and will see a progress monitor that lets you know that the backup is running. 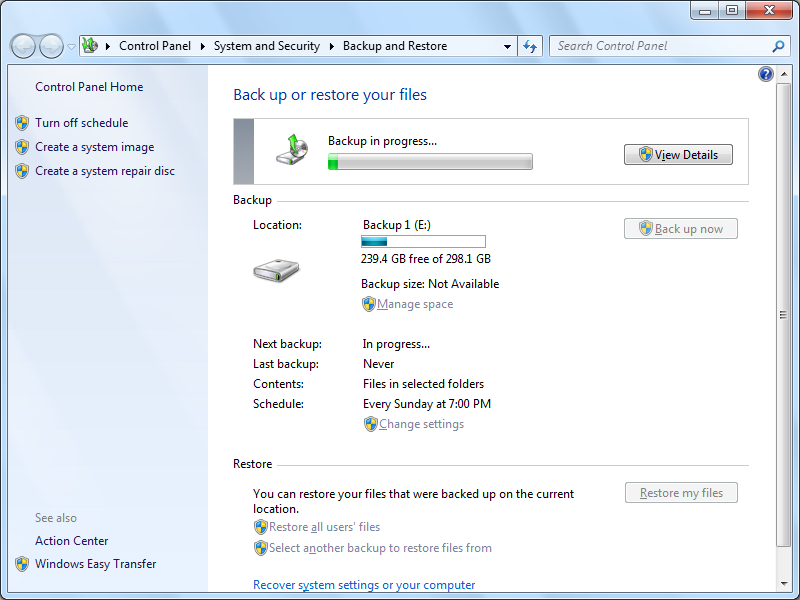 As the backup operation gets under way, you'll see the Backup and Restore window and notice that the backup is running.

Are you frustrated by Vista's Backup Files option and its lack of custom file and folder selection? Does the idea of being able to actually select what files and folders to back up in Windows 7's Backup and Restore tool sound like the right way to go? As always, if you have comments or information to share about this topic, please take a moment to drop by the TechRepublic Community Forums and let us hear from you.