Greg Shultz shows you how to migrate 3D Pinball for Windows - Space Cadet from Windows XP to Windows 7.

On a recent weekend, my daughters and I were perusing the various booths at a local flea market and came upon an old pinball machine. The machine had been refurbished and worked great with loud music, flashing lights, and all sorts of cool sound effects. My daughters got a big kick out of the game, and the three of us played for close to an hour.

Later that evening the girls asked me if we could find a pinball game for their Windows 7 computer. Remembering that Windows XP came with a Pinball game, I showed it to them on one of my older test systems. They loved it and asked if we could install it on their computer. At first I wasn't sure that it was possible, but upon doing some investigation, I discovered that it was.

After putting it on their system and playing it over and over again, I remembered how much fun this simple little game is and thought that other folks might be interested in putting Windows XP's 3D Pinball game in Windows 7. After all, even the most dedicated tech folks need to unwind every once in a while with a computer game.

In this edition of the Windows Desktop Report, I'll show you how to migrate 3D Pinball for Windows - Space Cadet from Windows XP to Windows 7. Along the way, I'll give you a little history about the game as well as show you some awesome tricks.

When Windows 95 came out, one of the features of the new operating system was that it provided a great platform for gaming, and lots of developers, such as Maxis, were clamoring for a piece of the action. 3D Pinball featuring the Space Cadet table was created by Maxis Software and licensed to Microsoft for inclusion in Microsoft Plus! for Windows 95. Maxis later released the Full Tilt! Pinball game package, which included the Space Cadet table as well as two other tables named Dragon's Keep and Skulduggery. 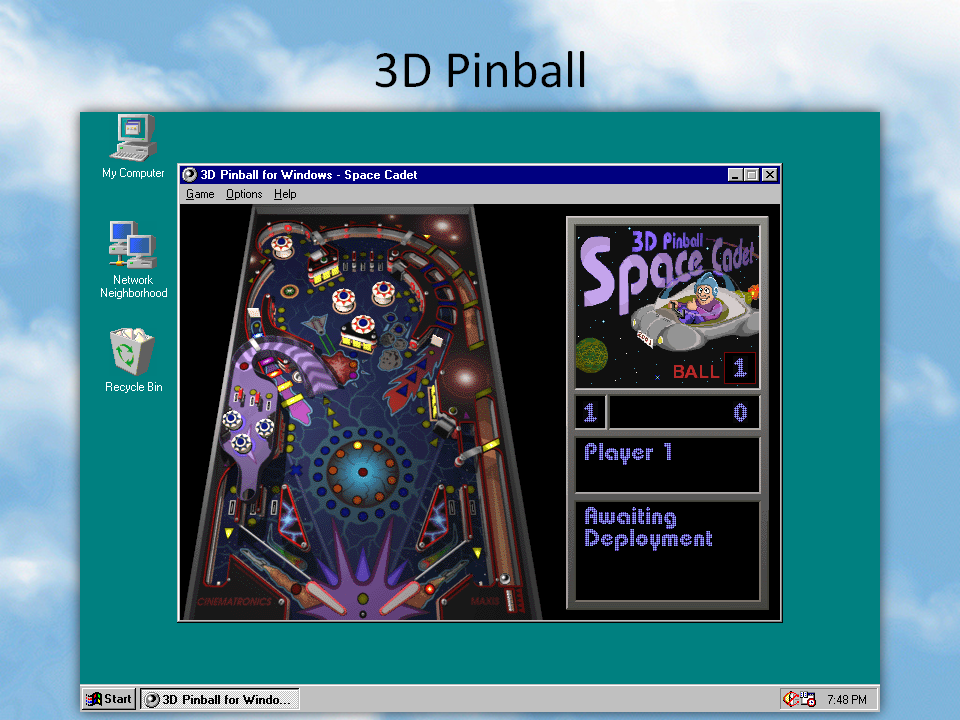 3D Pinball for Windows - Space Cadet became such a popular game in Windows that Microsoft included it in Windows 2000, Windows ME, and Windows XP. But, when Windows Vista came out in 2007, 3D Pinball for Windows - Space Cadet was nowhere to be found. After being a part of Windows for 12 years, the pinball game was no longer included. My guess is that the licensing agreement ran out.

There are two ways that you can migrate 3D Pinball for Windows - Space Cadet from Windows XP to Windows 7. The method you choose will depend on whether you have an old machine still running Windows XP or you just have the Windows XP DVD. I'll cover both methods.

One more thing that you need to be aware of is that the game has a maximum resolution of 640x480. The game does have a full screen mode, and I have been able to use it on most of my test systems. However, I was not able to run the game in full screen on my multiple-monitor system.

When you get to the Windows NT folder, create a new folder called Pinball. You may encounter a Destination Folder Access Denied dialog box, like the one shown in Figure A, and will need to click the Continue button in order to be able to create the Pinball folder. 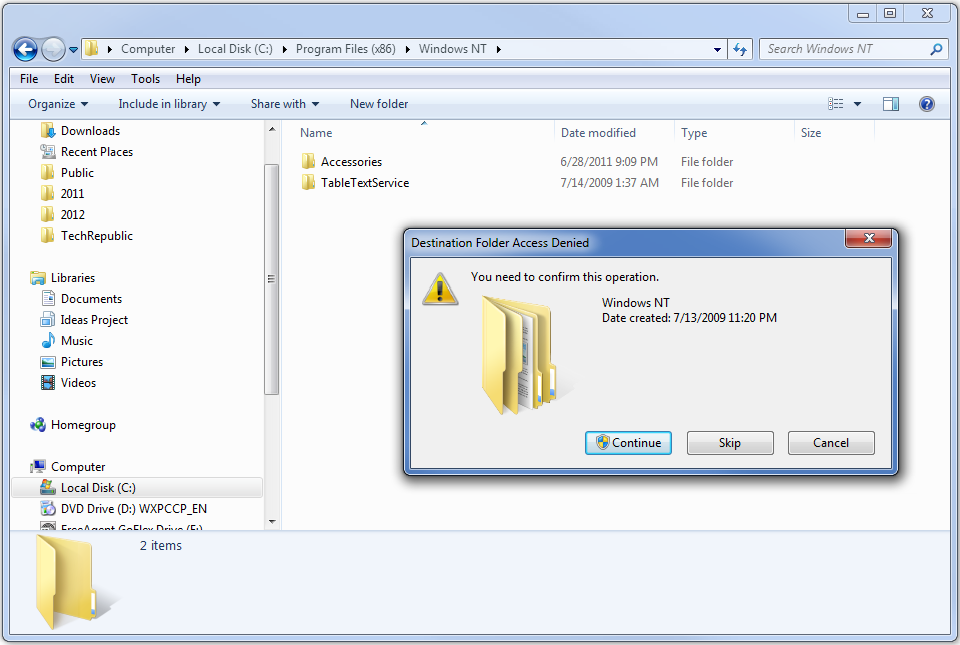 To create the Pinball folder, you'll have to click Continue in the Destination Folder Access Denied dialog box.

Copying the files from a Window XP system

If you have a running Windows XP system with 3D Pinball for Windows - Space Cadet installed on it, then you'll need a USB flash drive with at least 3MB of free space. Once you have the flash drive in the system, launch Windows Explorer and navigate to the C:\Program Files\Windows NT\Pinball folder. You will find 67 files in that folder and will need to select them all, as shown in Figure B, and then copy them all to the flash drive. As you can see the majority of the files, 60 to be exact, are WAV files that represent the Pinball game's sound effects. 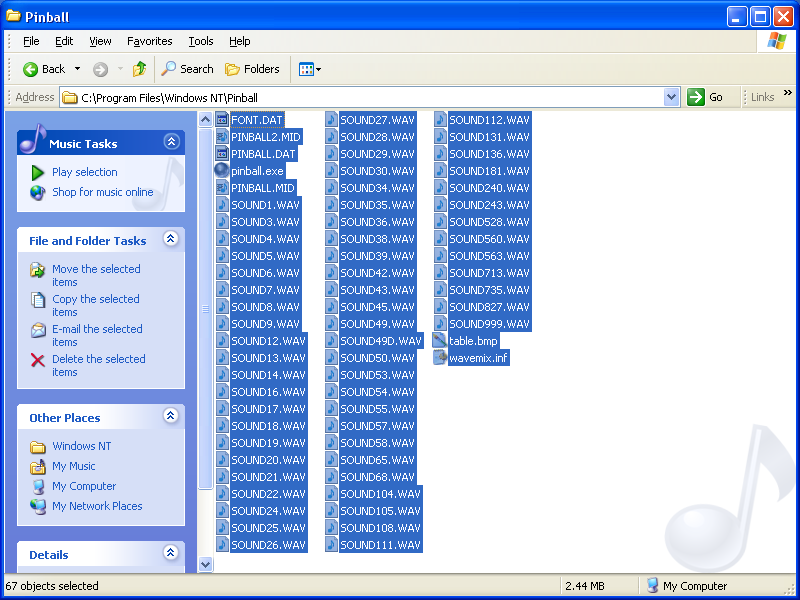 In the Pinball folder on Windows XP, you'll find 67 files.

Once the copy operation is complete, you can copy the Help file if you want to have it. If so, navigate to the C:\Windows\Help folder and copy the Pinball.chm Help file to the flash drive.

Now you can remove the flash drive from your Windows XP system and insert it into the Windows 7 system.

Copying the files from a Windows XP CD

Once you have the flash drive in the system, insert the Windows XP CD it into the optical drive on your Windows 7 system. When the AutoPlay dialog box appears, as shown in Figure C, just close it. 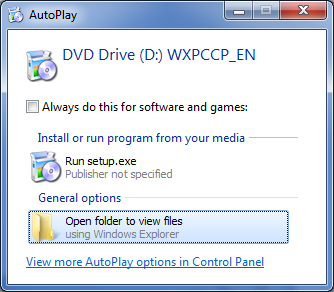 When the AutoPlay dialog box appears, just close it.

Now, access Computer, right-click on the optical drive, and select the Open Command Window Here command, as shown in Figure D. As you can see on my example system, the USB flash drive is assigned to drive letter G. 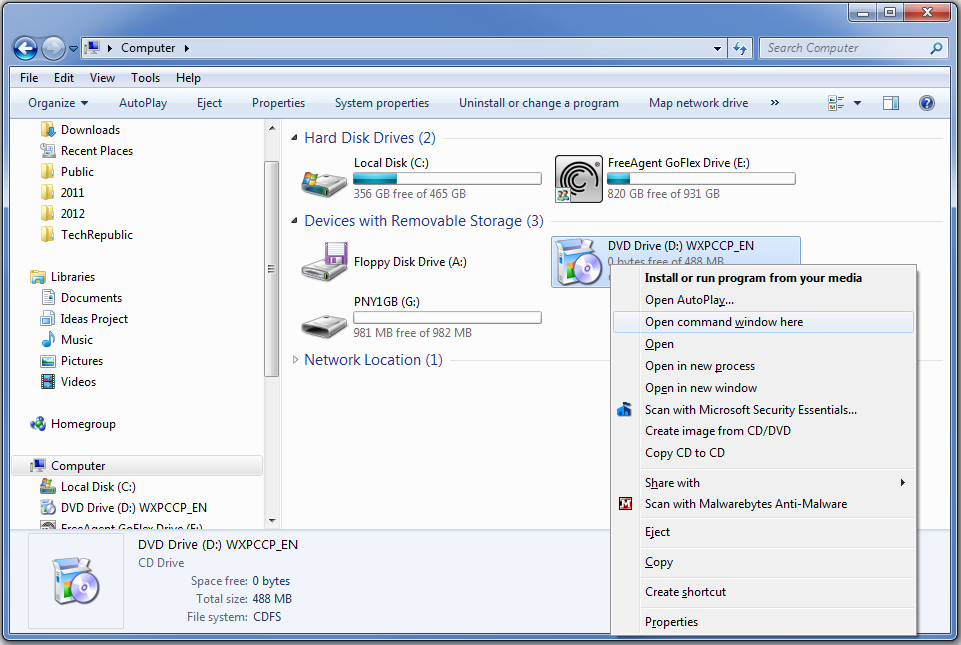 When you see the Command Prompt, type the command, CD i386, to change to the i386 directory as shown in Figure E. 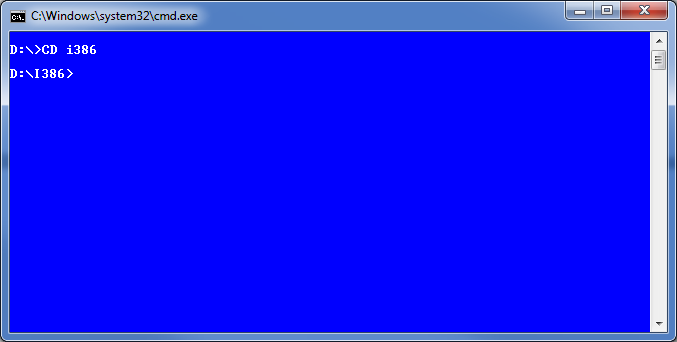 The first thing you have to do is change to the i386 folder on the Windows XP CD.

At this point, you can type the following commands substituting the drive letter assigned to your USB flash drive.

When you complete the operation, you should have 70 files on your flash drive.

Copying the files to Windows 7

Now that you have all the files to run 3D Pinball on your flash drive, you can use Windows Explorer and Drag-and-Drop to copy them to the Pinball folder you set up earlier. When you do so, you'll encounter a Destination Folder Access Denied dialog box, like the one shown in Figure F. Just click the Continue button and all the files will be copied. 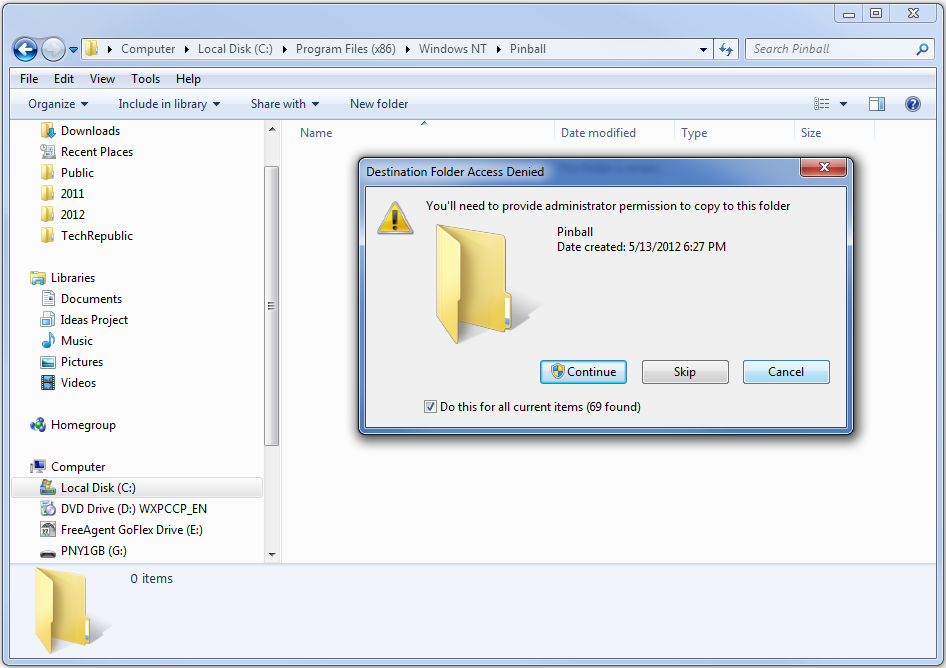 Now, just right-click on the Pinball.exe file and select the Send To | Desktop (create shortcut) command. You can now place that shortcut on the Start menu and use it to run the 3D Pinball game.

If you are interested, you can learn all about the 3D Pinball game from the Help system. However, keep in mind that the Help file will be missing the graphics and some of the links won't work. The Table.bmp file that you copied to the Pinball folder contains a map that identifies all the table components.

The 3D Pinball game is divided into nine levels, which are represented as ranks. The lowest rank is Cadet, and the highest rank is Fleet Admiral. As you complete each mission, you advance to the next rank. However, as soon as the game is over, you lose your rank and must start a new game with three balls and the rank of Cadet.

Keep in mind that there isn't a text box into which you type these secret codes -- you just type them. However, the 3D Pinball for Windows window must be active.

Did you enjoy playing the 3D Pinball for Windows - Space Cadet in previous versions of Windows? Will you use the techniques explained in this article to migrate the game to Windows 7? As always, if you have comments or information to share about this topic, please take a moment to drop by the TechRepublic Community Forums and let us hear from you.