Greg Shultz shows you how to use free VMware tools to move your entire Windows XP installation into Windows 7.

If you are still using Microsoft Windows XP but thinking of moving to Windows 7, you're probably feeling a bit apprehensive about the project. What if I told you that you could have Windows XP and Windows 7 running on the same system? Of course, you might say that's what Windows XP Mode is all about, and you'd be right.

But what if I told you that you could have your Windows XP installation and Windows 7 running on the same system? To that you might say that's what dual booting is all about, and you'd be right again.

But what if I told you that you could use VMware Converter to turn your entire Windows XP installation (data files, applications as well as the operating system) into a virtual machine that you could then run inside Windows 7 with VMware Player without having to worry about configuring a dual-boot partition scheme and without having to reinstall all your applications in Windows XP Mode? Well, it's true, and the best part is that it won't cost you a penny!

In this edition of the Windows Desktop Report, I'll show you how to use these free VMware tools to move your Windows XP installation into Windows 7.

(Note: While I have chosen to highlight this technique using Windows XP, it will work equally well with Windows Vista.)

Before you can begin this procedure, there are a few caveats that you need to be aware of, so read carefully.

When you download the VMware Converter or the VMware Player, you'll need to fill out a registration form and agree to a EULA, which includes the following sections pertaining to operating systems:

In other words, it's up to you to determine whether you have proper licensing to simultaneously run copies of Windows XP or Vista and Windows 7. Of course, you will get varying explanations depending on who you talk to. And, as you can imagine, there's much debate and confusion.

Another thing to keep in mind is if the hardware of your Windows 7 system is dramatically different (i.e. more modern) from the hardware on your Windows XP system, you may have to reactivate Windows XP. This could lead you down a tricky path and might be more trouble than it is worth. It's up to you to decide how many hoops you are willing to go through to get this to work.

One more thing, make sure that you have a full backup or a disk image of your Windows XP system before you start. That way if something goes wrong, you will be safe.

Getting the VMware tools

Each file is a little over 100MB so, depending on your broadband connection, the download might take a a while.

In my example, I'll be using two different computers: one computer running Windows XP and one computer running Windows 7. I'll install the VMware Converter on the Windows XP system and use it to create the virtual machine on an external drive. I'll install the VMware Player on the Windows 7 system and run the virtual machine there.

Once you have downloaded the VMware Converter, just copy the executable file to your Windows XP system. Just to be on the safe side, make sure that your system is currently up to date with Windows Update. Then, I recommend that you close all applications and restart the system before you install the VMware Converter. That way, you'll be sure to have a fresh environment that's free from any potential problems.

Now, you're ready to get down to business. The Conversion wizard is a four-step procedure during which you'll choose from a set of configuration options. Let's take a closer look.

Once the Conversion wizard begins, you'll be prompted to specify the source for the virtual machine. From the Select Source Type drop-down menu, choose Powered-on Machine. Then, select the This Local Machine radio button, as shown in Figure A. To continue, click the Next button. 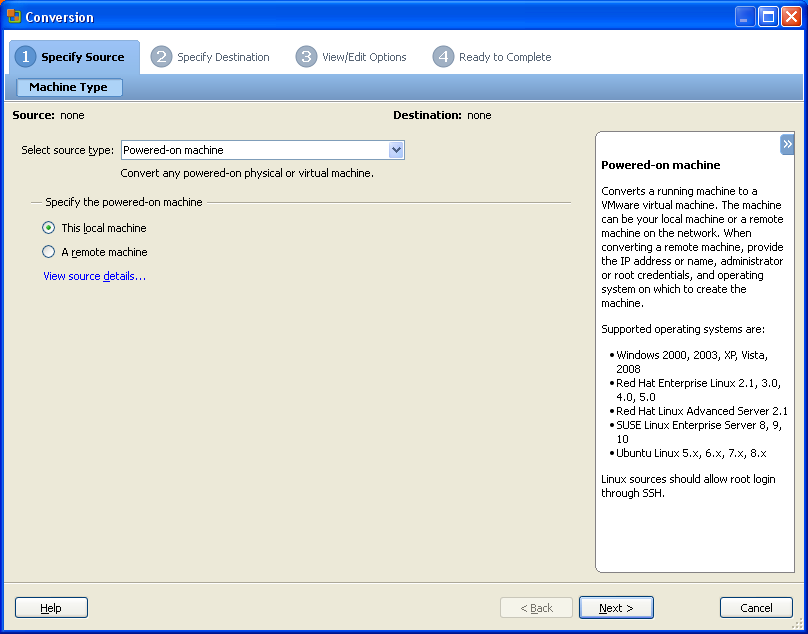 In Step 1, you'll specify the source.

In Step 2, you'll specify the destination for the virtual machine, as shown in Figure B. From the Select Destination Type drop-down menu, choose VMware Workstation or Other VMware Virtual Machine. From the Select VMware Product drop-down menu, choose VMware Workstation 6.5.x. Then, in the Name text box, provide a name for your virtual machine. Finally, click the Browse button adjacent to the Choose a Location for the Virtual Machine text box and specify a folder or drive, such as a external device or a network, on which to save the virtual machine file. 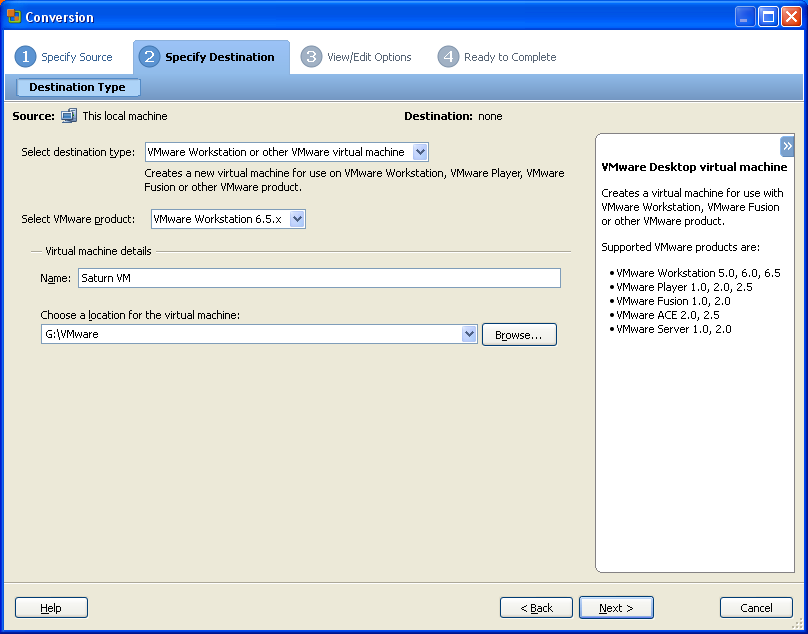 In Step 2, you'll specify the destination.

In Step 3, there are two key sections in which you'll need to pay special attention. You can just leave the default settings for the rest. In the Devices section, you'll specify the amount of RAM to set aside for your virtual machine.

Since you're working with the local machine, the VMware Converter will choose a RAM setting based on your system's amount of RAM. However, because you'll actually be using the virtual machine on your Windows 7 system, you'll probably want to exceed the default maximum setting. As such, you can ignore the warning messages shown in Figure C. 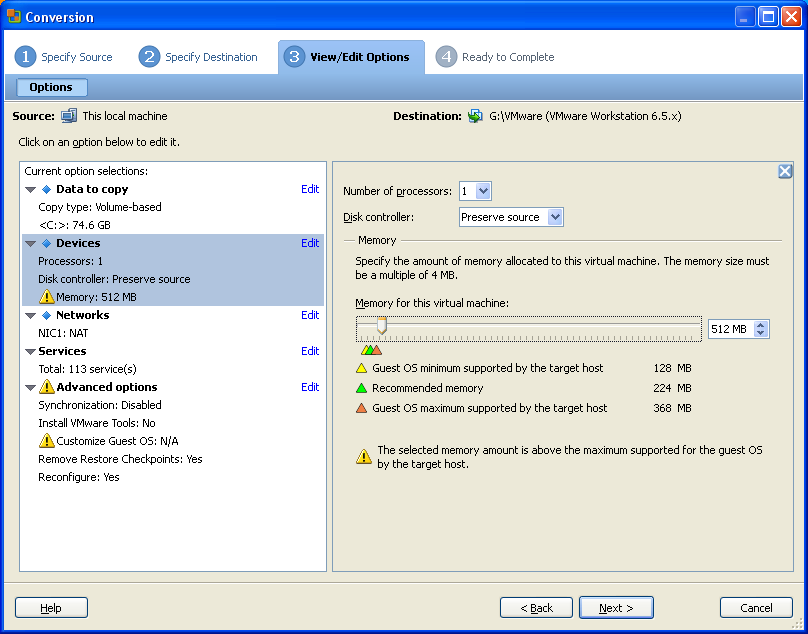 In Step 3, you'll configure the amount of RAM to dedicate to your virtual machine.

In the Networks section, you'll want to choose NAT from the Connection Type drop-down menu, as shown in Figure D, to specify that the virtual machine will share the host system's IP address. 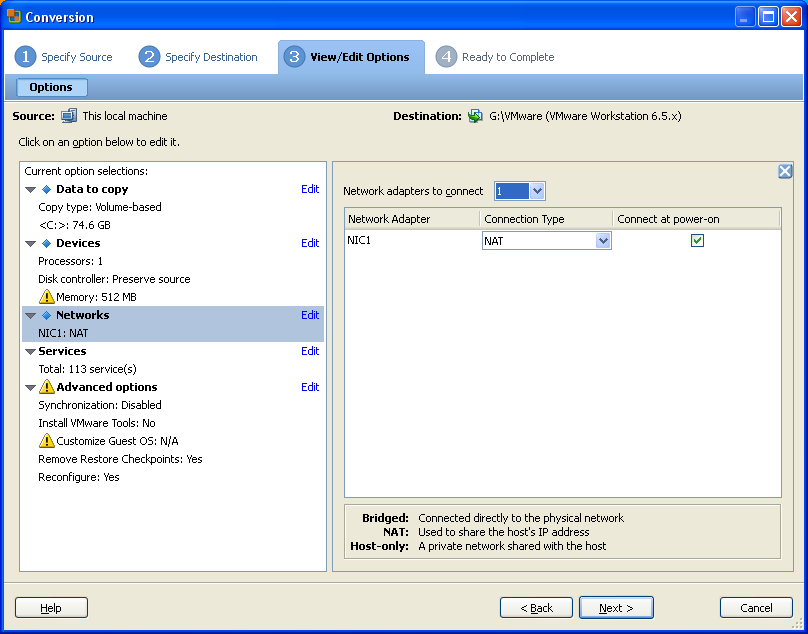 In Step 3, you'll also specify the type of network connection.

In step 4 of the Conversion wizard, you'll see all the settings that you specified as a confirmation, as shown in Figure E. To begin the actual conversion, just click the Finish button. 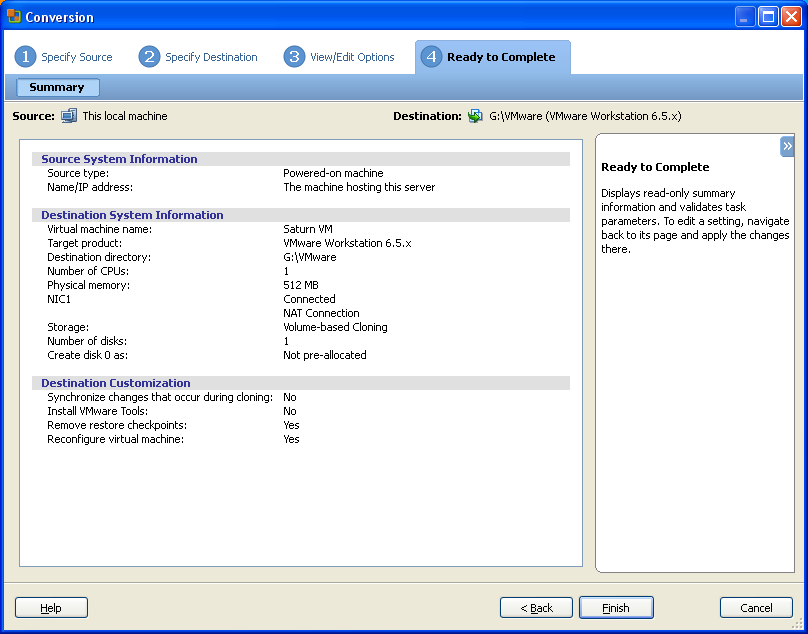 Step 4 of the Conversion wizard allows you to confirm all your choices.

As soon as you click Finish, the conversion procedure will begin. While you can monitor the process by watching the Status column and the Log Highlights, it does take some time to complete. For instance, my XP system with about 40GB on an 80GB drive took just a little over an hour to complete, as shown in Figure F. 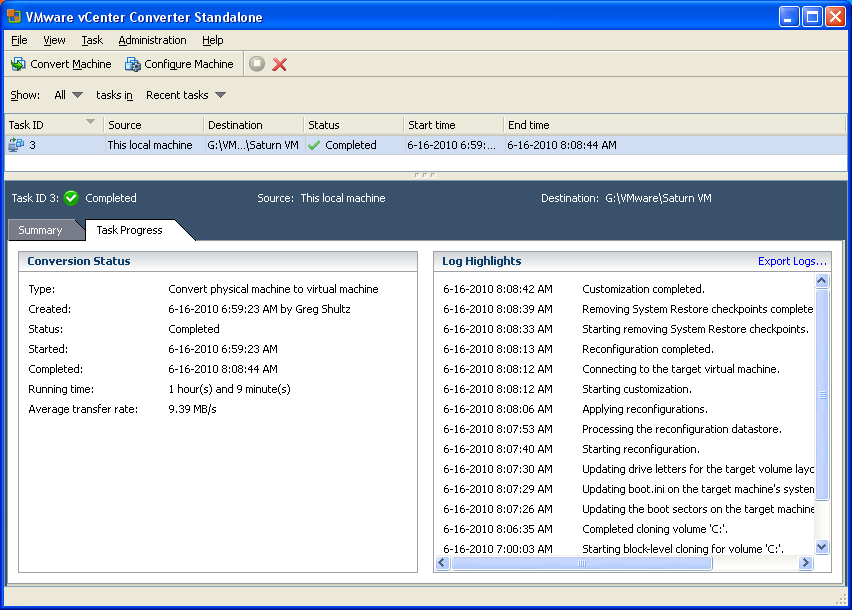 From clicking the Convert Machine button to receiving the Completed Status screen took 1 hour and 9 minutes on my test system.

To install the VMware Player, just copy the executable file to your Windows 7 system and run it. After you deal with the UAC, the installation procedure, which uses a straightforward wizard interface, is a relatively quick six-step operation. When it is complete, you will have to restart your system.

Once the copy operation is complete, you can launch the VMware Player. When you see the Welcome to VMware Player screen, as shown in Figure G, select the Open a Virtual Machine command. 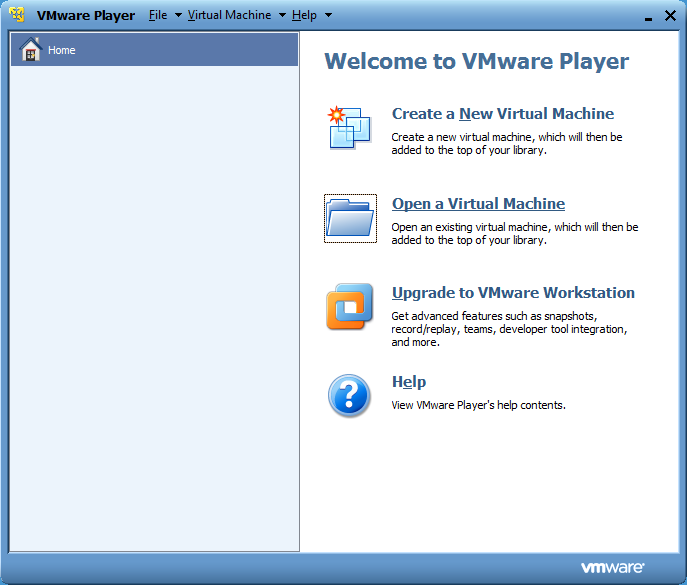 From the Welcome to VMware Player screen, select the Open a Virtual Machine command. 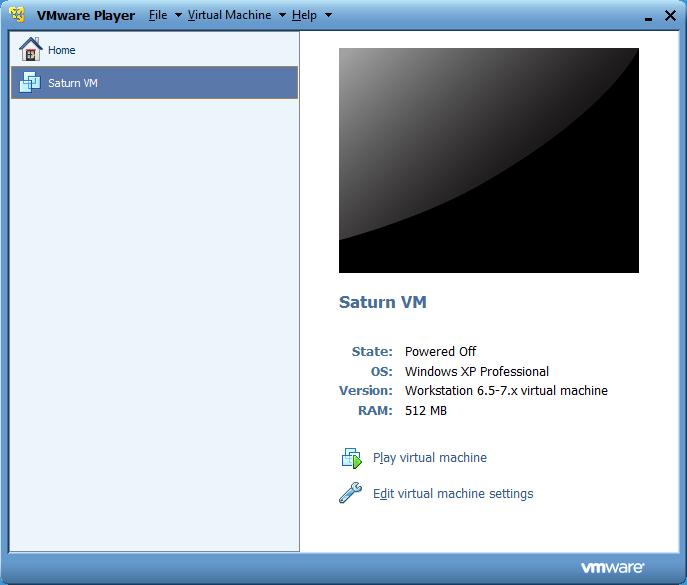 To get started, just click the Play Virtual Machine icon.

The first time you launch VMware Player, you may encounter warning messages about drives that were part of your old physical system that are not part of your new system. You can just bypass messages for the time being. You can later disable the missing drives.

For example, the VMware Tools provides better graphics performance, support for shared folders, drag-and-drop operations, automatic grabbing and releasing of the mouse cursor, copying and pasting between guest and host, and more.

To learn more about the VMware Player, download the Getting Started Guide PDF.

When you're done, you'll have Windows XP running in VMware Player inside Windows 7, as shown in Figure I. 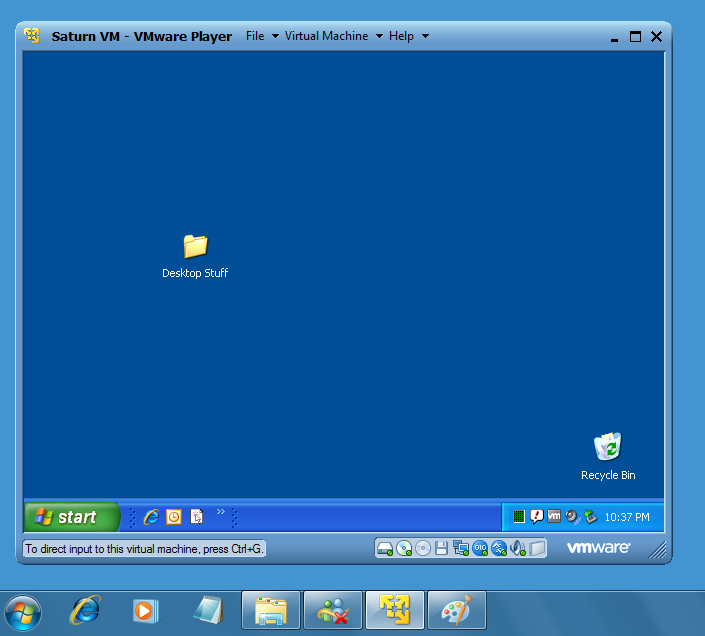 Will you use this technique to virtualize your Windows XP system? Have you used VMware Converter or VMware Player before? As always, if you have comments or information to share about this topic, please take a moment to drop by the TechRepublic Community Forums and let us hear from you.