John Sheesley describes his first computer: a TI 99/4a.

Mac Classic. He also asked other TechRepublic members what their first computers were.

My first computer was actually a TI 99/4a. This was a

computer that my parents bought when I was still in high school. It was a nice

little unit. Texas Instruments actually sold a lot of them in the early 80s

but got scared when IBM entered the market with the PC and bailed out.

As you can see from the image below, the TI 99/4a was all

integrated in once piece, kind of like the Commodore 64. Mine had a whopping

16Kb of RAM. I forget the speed of the processor, but I dont think it was over 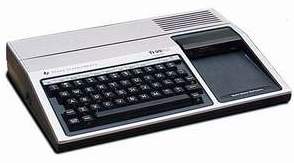 play games with. You could attach a joystick to it. For external storage your

basic choice was a cassette recorder.

(Yes, like the kind you record voice on.) To get any real work done however, you needed

phenomenal 64K and could host full height floppy drives. We never got that.

1000. The Tandy 1000 was Radio Shacks first successful IBM compatible. Its predecessor, the Tandy 2000, was actually

The Tandy 1000, shown below, was actually a clone of the

ill-fated PCjr. As such, it ran all of

the regular programs for the IBM PC, but had an enhanced sound chip and better

basic IBM CGA graphics limited you to 4 colors. It wouldnt be until the mid 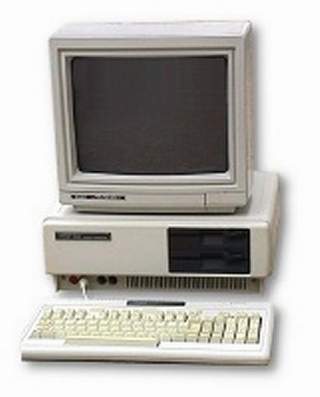 I went ahead and bought some of the extras for it. An

immediately get the color monitor - I stuck with a green screen.

I also didnt get the extra memory at first. The Tandy came with 128K of memory which displayed in

giant numbers when you booted the machine. My roommate who was a Computer

Science major took a look at it the first time it started up and said 128K?!

What are you going to do with THAT much memory?.

Actually  nothing. You could do hardly anything in 128K with

a PC-compatible. The first thing I did to buy an expansion board to

monitor. When I outgrew the 10Mb hard drive, I put an internal 40Mb in

it which is still there.

the 8088 CPU that came with the computer and plug the cable in. Then youd put

the card in an available slot, load the DOS device driver in CONFIG.SYS and

zoom off you went.

home office. Its a great little machine and it still works. I also use it as a

can turn on the Tandy, have it go through its startup routines and boot

DOS and Windows 2.03 before my 3.0Ghz Dell here at the office boots Windows

XP. Hows that for 20 years of progress?