When I say PDF, your automatic response is probably Adobe Acrobat. However, the newly released Nitro Pro 8 is a PDF creator and editor from Nitro that packs some powerful features in a very usable package. It's a definite challenger to the more established and better-known Adobe Acrobat Professional. Pricing is $119.99/single copy at launch. 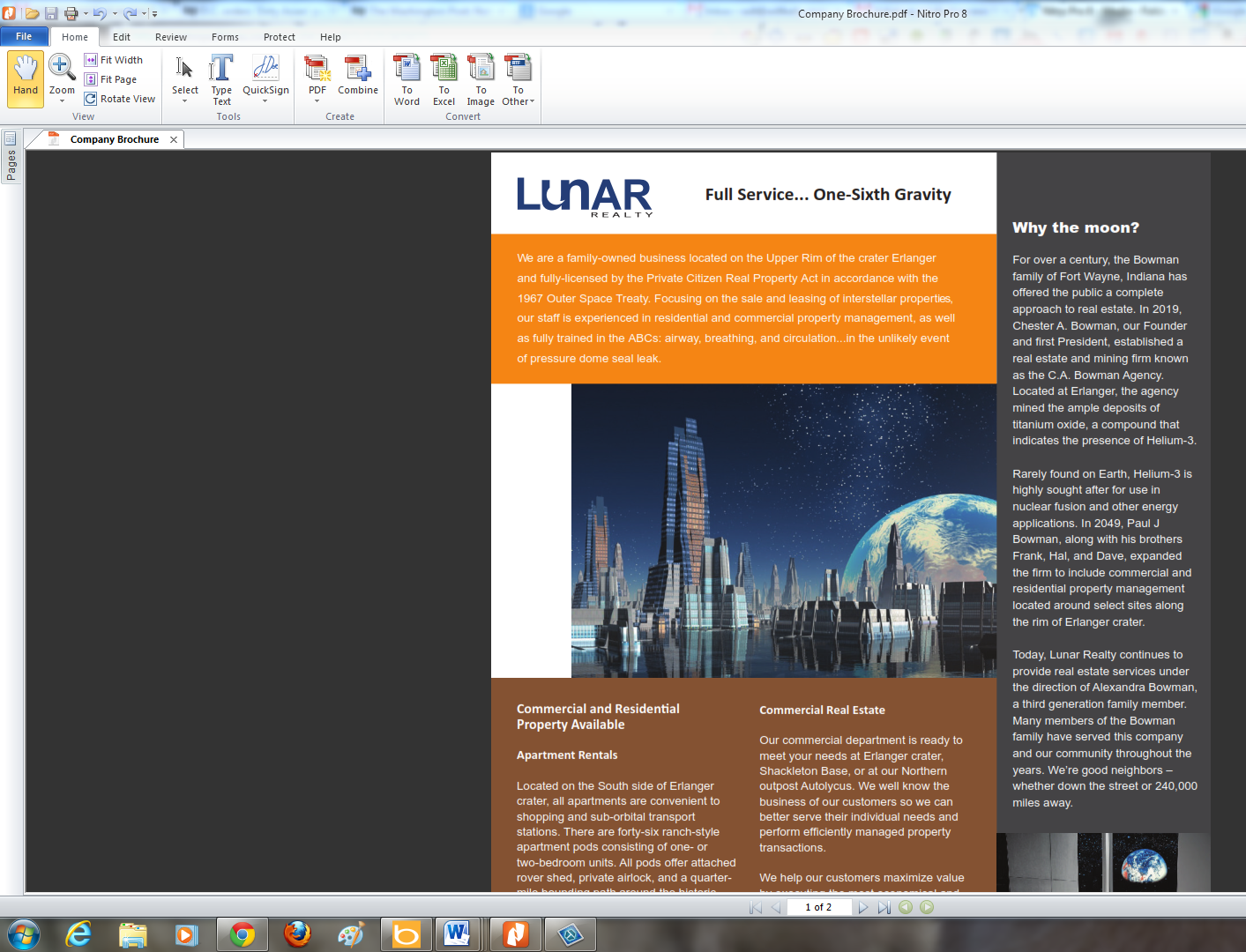 Nitro Pro 8 runs on Windows XP/Vista/7/8 and is available in 32- and 64-bit versions. It has no heavy duty hardware requirements.

Create PDFs from within Microsoft Office

Creating and converting PDFs with Nitro Pro 8 uses a simplified process. From Microsoft Word, click Nitro Pro 8 and then click Create PDF and Nitro Pro creates the PDF and opens it in the Nitro Pro 8 application for review and further modification. The Nitro Pro 8 ribbon that integrates with Microsoft Word when you install Nitro Pro 8 is well laid out and easy to follow. It puts options for PDF creation, security, and conversion in an easily accessible ribbon, which is what you want if you want to move PDF creation tools out of the publications department and into the PCs of more novice users.

It's easy to forget that PDF is an open standard now and no longer a proprietary format owned by Adobe. This means any PDFs you create with Nitro Pro 8 are compatible with Adobe Acrobat Professional, Adobe Reader, and other third party PDF readers and applications.

If you need to secure your PDFs from unauthorized readers, Nitro Pro has a Protect ribbon where you can set password security, certificate security, and other high end security features that should satisfy enterprise requirements for PDFs.

The PDF format gained such initial popularity because it was a secure document format that prevented people from editing your documents. That is just not the case anymore with the prevalence of PDFs available online and source documents getting lost for whatever reason inside the corporate enterprise. Nitro Pro 8 offers a point and click conversion to Word, Excel, image format (PNG or GIF) as well as text and Rich Text File.

Nitro Pro 8 includes an Automatic OCR feature to power the conversion from PDF to Word/Excel. I converted the Nitro PDF Reviewer's Guide from PDF to MS Word, and Nitro Pro 8 preserved much of the document formatting. However, macros like automated table of contents and figure captions didn't transfer over. Headers and footers survived in my testing which are document elements Adobe Acrobat Professional chewed up during its conversion process. Whenever, I've had to convert a PDF back to Word or Excel it has always been for a major document rewrite or to salvage some information so the Automatic OCR and conversion fit well within those requirements.

There is also an improved PDF to Excel Conversion feature for exporting PDF tables into Excel spreadsheets. You may use this feature only once a year. However, run into a PDF of tabular data with the source document is gone with the last contractor who sat in the cubicle and this feature is going to save you time because it is going to help cut down on manual cleanup.

Create and use forms

Nitro Pro 8 lets you create fillable PDF forms from scratch. The Forms ribbon includes a full set of form elements you can drag and drop onto a blank page in order to create a form.

If you import a form in from a Word document or Excel spreadsheet, you have to use the Type Text Tool (Home | Type Text) to fill out the form fields. There is no feature to automate creating form fields in Nitro PDF 8 as you can in Adobe Acrobat Professional. Using the Type Text Tool is doable for many users but I expect it might be hard on larger forms that are more complex.

Nitro Pro 8 includes a nice range of PDF reviewing tools if you work on projects where PDFs are sent around for commenting and approval. The Review ribbon in Nitro Pro 8 includes drawing, annotation, a stamp (think rubber stamp) and markup tools accessible to every user. They aren't buried in a sub-menu and the icons make them easy to interpret and use.

Nitro Pro 8 is a solid PDF creator that doesn't short change on features. It's got some strong selling points such as price, usability, PDF compatibility, and features making it a definite option instead of Adobe Acrobat Professional.

Will Kelly is a freelance technical writer and analyst currently focusing on enterprise mobility, Bring Your Own Device (BYOD), and the consumerization of IT. He has also written about cloud computing, Big Data, virtualization, project management ap...