Greg Shultz provides more details on the looming official support deadline and what it will mean to Microsoft Windows XP SP2 users.

As you probably know, a lot of folks chose to continue running Microsoft Windows XP after Windows Vista came out because it was such a problematic operating system. As such, those folks simply refused to upgrade. Many people and organizations are still running Windows XP and waiting to see what happens as Windows 7 approaches its first Service Pack.

While that attitude is not surprising in and of itself, what is surprising is that a very large number of home users and organizations are still running the SP2 version of the operating system, even though SP3 has been available for over two years.

Reasons for continuing to use the SP2 version and purposefully avoiding SP3 range from perceived compatibility problems to the misconceptions that SP3 didn't offer anything new to that fact that because SP2 was a very much hyped security packed version that it was somehow superior to its successor. Whatever the reason, those folks really must wake up and smell the coffee soon because in about two weeks official support for Windows XP SP2 will end.

In this edition of the Windows Desktop Report, I'll provide more details on the looming deadline and what it will mean to Windows XP SP2 users. As I do, I'll examine how this SP2 phenomenon occurred.

What made SP2 so special?

Let's begin with a look back at what made SP2 so special in the first place. As you may remember, soon after Windows XP launched in August 2001 it quickly became a very popular operating system with millions of users due to its advanced features and capabilities as well as its stability. Well, it wasn't long before hackers and other evildoers began targeting Windows XP.

Of course, security had always been important, but it had to become an even bigger priority if the company was going to weather the storm. The Trustworthy Computing initiative was such a big deal that on January 5, 2002, Bill Gates sent out an e-mail message to everyone at Microsoft outlining the new plan. (If you are interested, deep within its archive, Wired News has a copy of the now infamous Trustworthy Computing e-mail message.)

The first real culmination of this ongoing security effort came out in August 2004 in the guise of Service Pack 2 for Windows XP. The focal point of SP2 was the new Windows Security Center, which provided a general overview of security on the system, including monitoring support for third-party antivirus software, a place to keep tabs on updates from Windows Update, and the newly designed and renamed Windows Firewall that was enabled by default. There were many other new and improved security features in SP2, such as support for hardware DEP (Data Execution Prevention), WPA (Wi-Fi Protected Access) encryption capability for wireless connections, and a pop-up blocker for Internet Explorer 6, just to mention a few.

(As a side note, SP2 also marked the introduction of a generic splash screen seen at boot up. Prior to SP2, each XP edition's splash screen had a subtitle and different color progress bars. See Dinosaur Sightings: Windows splash screens from 1.01 to 7.)

What made SP3 undesirable?

By the time that Microsoft released Windows XP Service Pack 3 to the general public, in July 2008, SP2 had already been around for almost four years and was tried and true. It provided the necessary security, and it just worked. So many people just weren't ready to potentially jeopardize their secure operating system with a new service pack and decided to just wait and see how it played out.

It didn't help that SP3 didn't really bring anything new or exciting to the table. In fact, Microsoft unceremoniously described SP3 in the official Overview of Windows XP Service Pack 3 whitepaper as:

It also didn't help that SP3 arrived on the scene while Vista was still falling all over itself and making a mockery of the Windows operating system.

There were some compatibility problems with SP3 when it first launched. However, chances are good that any problems that existed two years ago have been cleared up by now. Seriously, think about it. When was the last time that you heard someone dissing Windows XP SP3?

What does it mean that SP2 is no longer supported?

Well, it actually means two things. First, it means that on July 13. Microsoft will cease providing security updates and patches designed specifically for Windows XP SP2. Second, it means that hackers and evildoers worldwide will begin releasing an inordinate amount of malware aimed directly at computers running Windows XP SP2. And, there will be no defense whatsoever.

Those malevolent folks know, without a doubt, that there will be thousands of vulnerable Windows XP SP2 systems out there just ripe for the picking. In fact, they are counting on it, because they know that people and organizations who have held on to SP2 for this long are definitely procrastinators.

Not sure what service pack you have?

If you are not exactly sure which service pack is installed on your Windows XP system, you can find out real quick. Just press [Windows]+R to open the Run dialog box and type winver in the Open box. Then, click OK. When you do, the About Windows dialog box will appear and will clearly identify the installed service pack. If you see Service Pack 2, as shown in Figure A, then you need to get a move on. 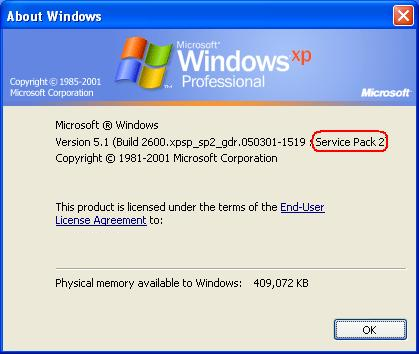 The About Windows dialog box will clearly identify the installed service pack.

What should you do?

Of course, Microsoft recommends that you move to Windows 7, which you really should consider. However, if you happen to be running Windows XP SP2 and are not ready to make that move just yet, the first thing you should do is make a full backup or disk image of your system. As soon as you complete that operation, immediately visit the Windows Update site so that you can download and install SP3. Support for Windows XP Service Pack 3 will continue through April 2014. (By that date, the Windows XP operating system will be almost 13 years old.)

You can find information about installing Service Pack 3 at these locations:

64-bit is a special case

Are you or your organization still using Windows XP SP2? Do you plan on going to SP3 or moving to Windows 7? Have you recently upgraded from SP2 to SP3? If so, what has been your experience?