If you've enjoyed PowerToys in earlier versions of the Windows operating system, don't despair -- Greg Shultz has uncovered two PowerToys-like programs especially for Windows Vista for you to play with while adding excitement to your Vista system.

Working with various versions of the Windows operating system over the years, I've always enjoyed discovering and using programs or utilities designed to provide the user with handy additional features. My all-time favorites, the PowerToys collection, are a set of additional components from Microsoft -- first for Windows 95 and then for Windows XP. Most of the PowerToys tools perform a single function, which I think makes them very efficient and easy to use.

While there isn't PowerToys for Windows Vista, Windows Vista's set of Sidebar tools called Gadgets come really close to PowerToys. (Read my column, "My six favorite Sidebar Gadgets.") And while I'm always on the lookout for new Gadgets, I recently expanded my parameters a bit to see what else was out there for Windows Vista.

In this edition of the Windows Vista Report, I'll take a look at two programs that I have found to be nice PowerToys-like additions to Windows Vista.

I don't place a lot of shortcuts on my Windows Vista desktop, but I want the ones that I do to look nice. I have always despised the shortcut overlays on Windows shortcut icons, so I used registry edits and then the TweakUI PowerToy to remove shortcut overlays. From there, I discovered Frameworkx's Windows Vista Shortcut Overlay Remover. This program is exactly what I wanted!

When you run the Windows Vista Shortcut Overlay Remover, you'll encounter a User Account Control dialog box. After you respond accordingly, you'll see the Vista Shortcut Overlay Remover dialog box (Figure A), which prompts you to replace the default shortcut overlay with a smaller version (Light Arrow) or to remove the shortcut overlay completely (No Arrow). After you click the Apply button, you need to log off and log back on again for the change to take effect. (You can always change back later.) 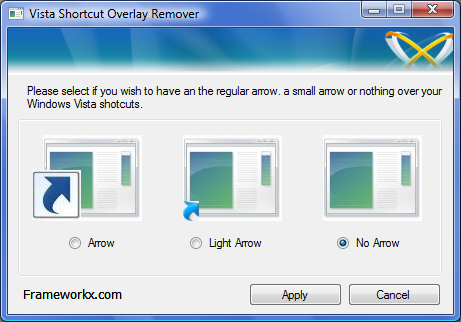 The Windows Vista Shortcut Overlay Remover allows you to reduce or remove the arrow on the shortcut overlay.

Another program I like is SmartFlip, which builds on the concept of Flip3D but leans more towards Mac OS X Expose (Figure B). Keep in mind that the author of the program, Lup Gratian, still considers this version a beta. I have only run into minimal problems with the program. 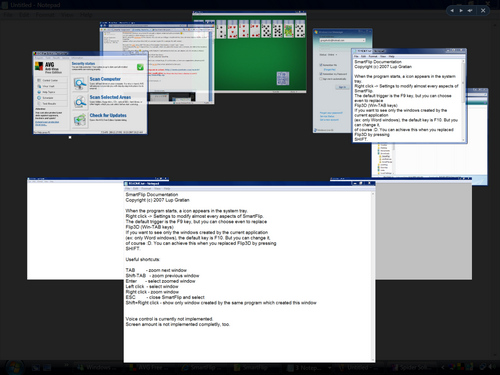 Constructed on the Windows Presentation Foundation -- Windows Vista's built-in 3D graphical subsystem feature -- there's no real installation procedure. No installation procedure means that experimenting with the software won't jeopardize the integrity of your current system, because SmartFlip is comprised of a single EXE file. SmartFlip allows you to graphically flip through all of your running applications and all of the open documents associated with an application. For example, if I am working on several Word documents, I can simply flip between the document windows.

You can flip between windows by clicking the arrows that appear in the upper right corner or by using a mouse wheel. If you desire, you can reassign the [Windows][Tab] combination from Flip3D to SmartFlip. On the Settings panel, you'll find a host of other configuration options, including window opacity and animation speed. You can even set up glowing window titles that appear when you select or hover over a window.

Do you think the Windows Vista Shortcut Overlay Remover or SmartFlip sound like useful tools? If so, which one are you more likely to use? If you know of or use other PowerToys-like tools in Windows Vista, what are they?