The Previous Versions feature of System Restore in Windows 7 can recover data in the event that a file is inadvertently deleted or becomes corrupted.

Many IT professionals know about, or have used, a restore point created by System Restore to restore a Windows system to a previous condition after some sort of a disaster. But did you know that in Windows 7 (and to some extent in Vista), the System Restore feature has been expanded in scope so that it now keeps track of, and saves, previous versions of data files that you've modified?

This means that in addition to allowing you to easily recover your system in the event of a disaster, System Restore's Previous Versions feature can help you to recover data in the event that a file is inadvertently deleted or becomes corrupted or even if you simply want to instantly undo a vast amount of editing changes.

While I am hyping Previous Versions as a new feature, that's not entirely true. It actually has roots that go back to Windows XP and Windows Server 2003 when it was known as the Volume Shadow Copy Service. When you installed the Shadow Copies of Shared Folders client on a Windows XP system that was connected to a Windows Server 2003 server, the Previous Versions feature would be available in Windows XP. What's actually new in Windows 7 is that the entire feature is contained in the new operating system -- no server connection required.

As you know, to accomplish its feat, System Restore continuously monitors your system looking for significant changes to the operating system, such as when you install a new application, install new hardware and drivers, or receive a system or security update from Windows Update. When such an event occurs, System Restore will automatically create a Restore Point, which is essentially a snapshot of your system state, which comprises crucial system files, including certain parts of the registry. At the same time, Windows 7's System Restore will create snapshots of all the data files on the hard disk.

In addition, if you also create backups using Windows 7's Backup and Restore tool, the Previous Versions feature will keep track of those backups and allow you to restore individual files from the Backup as well as the Restore Point. 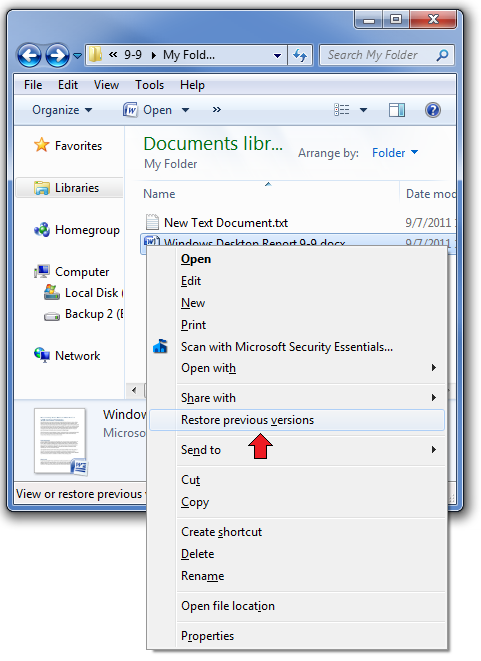 When you select the command, you'll see the Previous Versions tab of the file's Properties dialog box, as shown in Figure B. As you can see, this particular file is protected by both a Restore Point and Backup. Therefore, if I needed to recover an earlier version of this file, I could choose either copy depending on the date of the copy that I wanted. 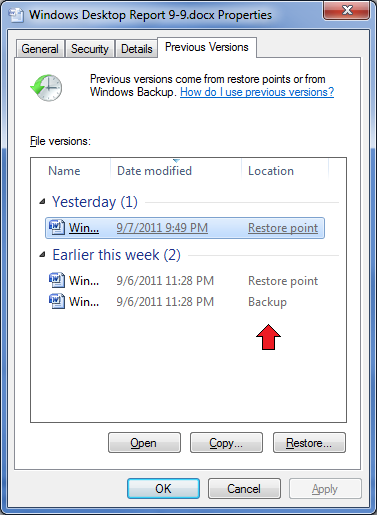 If you create backups using Windows 7's Backup and Restore tool, you can restore individual files from either the Backup or the Restore Point.

As you can see, there are three buttons on the Previous Versions tab: Open, Copy, and Restore. If you want to make sure that this is the version of the file that you want, you can select it and click the Open button; in this case Word would open the document so that you can check it out.

If you select the Copy button, you will see a standard Copy Items dialog box (like the Copy To command) and can restore the file to another folder. (Keep in mind that the Open and Copy commands will work only on files that are saved in a Restore Point snapshot -- you won't be able to use them if the version is available in a Backup.) If you select the Restore button, the file will be restored in the same condition as it was when it was saved by the Restore Point or the Backup. 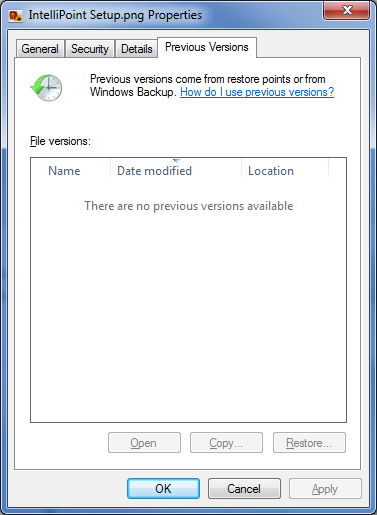 If a file has not been altered since the last restore point, you'll see a message like the one shown here.

However, that doesn't mean there isn't a previous version stored in the Restore Point. In fact, if you open and save the file, you will see the Restore Point version in the Previous Versions tab.

Furthermore, if you have not altered a file for several months, new versions will not be saved each time a Restore Point is created.

Now that you have a good understanding of what the Previous Versions feature is all about, let's take a look at how it works. For example, let's suppose that, inadvertently, I permanently delete my Word document, as shown in Figure D, and then later realize my mistake. In this case, since the file is gone, there is nothing to right-click on, so I must access the Previous Versions tab of the folder in which the file used to reside, as shown in Figure E. 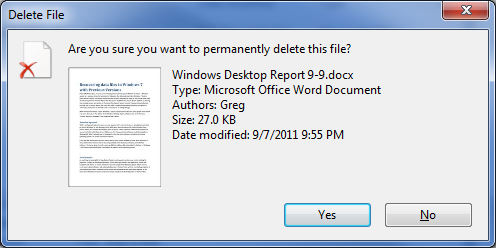 I accidentally deleted my Word document. 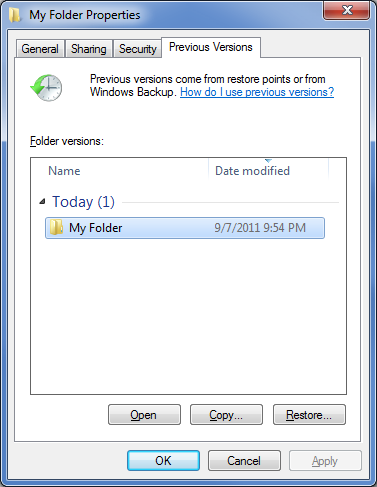 To restore a permanently deleted file, I begin by accessing the Previous Versions tab of the folder in which the file used to reside.

If I want to make sure that this folder contains the file that I am looking for, I click the Open button. When I do, I see a folder that contains the copy of the file. At that point, I can actually open the file in Word to check its contents. Once I am sure that this is the file that I want to restore, I can close the file and the folder to return to the Previous Versions tab. At this point, I'll select the Restore button and will see a confirmation dialog box like the one in Figure F. If I click the Restore button, the file will be put back into its original folder. 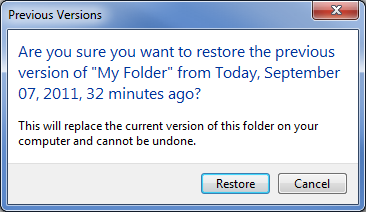 Before you can restore a file, you'll be prompted to confirm the operation.

Now, even though the message in this dialog box makes it sound like the entire folder will be replaced, that's not really the case -- only the deleted file will be restored. For instance, I had several other files in the folder before the Restore operation and they remained intact after the Restore operation.

Were you aware of the Previous Versions feature in Windows 7? If not, will you use it after reading this article? If you have used it, what has been your experience? As always, if you have comments or information to share about this topic, please take a moment to drop by the TechRepublic Community Forums and let us hear from you.