If you are looking for an anti-malware product that is both sharp looking and decent on performance, IObit has something for you in Malware Fighter. 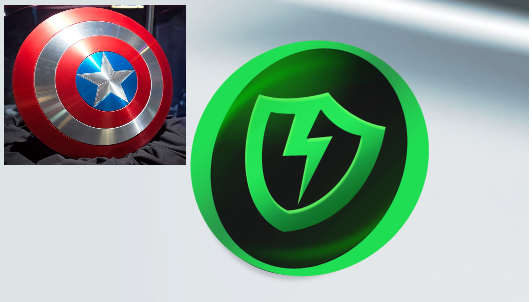 Editor's note: After conferring with TechRepublic members in the discussion thread following this blog post, Matt has been persuaded that IObit Malware Fighter fails to meet certain standards and has reassessed his original positive review. If you have more insight into IObit Malware Fighter, please post a comment and tell us what you have discovered.

Earlier this year, I covered an excellent anti-malware product called Malwarebytes Anti-malware. It's fast, robust and has a solid engine with few if any false positives encountered during scanning. Competition does exist in this space; however, many other software products return poor quality scans and higher-than-comfortable system resource usages, which can be quite annoying. But other gems are out there as well.

IObit, a company that has been in the Windows security and system utilities business for some time, has an anti-malware product. IObit Malware Fighter aims to fend off the throngs of malicious code, while keeping in lockstep with any other installed anti-virus package in an effort to bolster defenses. It has a few interesting features to bring to the table as well as some potential annoyances as well.

Sadly, the installer for Malware Fighter, at least in the free version, contains a bloatware toolbar that can get installed if you aren't careful on picking the correct button. I have a natural aversion to toolbars on principle and I prefer to keep my browsers free of such add-ons. However, during the Malware Fighter install, the "Accept and Install" button is placed in such a way that it is easy to mistake this as a required step in order to proceed with the entire installation. Thankfully this is not the case and one can simply press the "Decline" button to skip ahead. 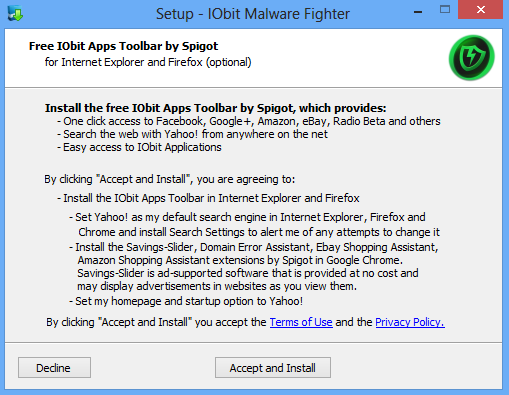 Once Malware Fighter is up and running, you will be asked to update the malware heuristics engine then proceed with at least one smart scan of your PC's hard drive. The entire process could only take anywhere from a few minutes to nearly half an hour or so, depending on the amount of files that needs to pass through the scanner. The UI has an oddly pleasing, solid color aesthetic to it that is somewhat reminiscent of a Windows 8 tablet app in design. I was able to navigate to the various sections of the app quickly and easily. 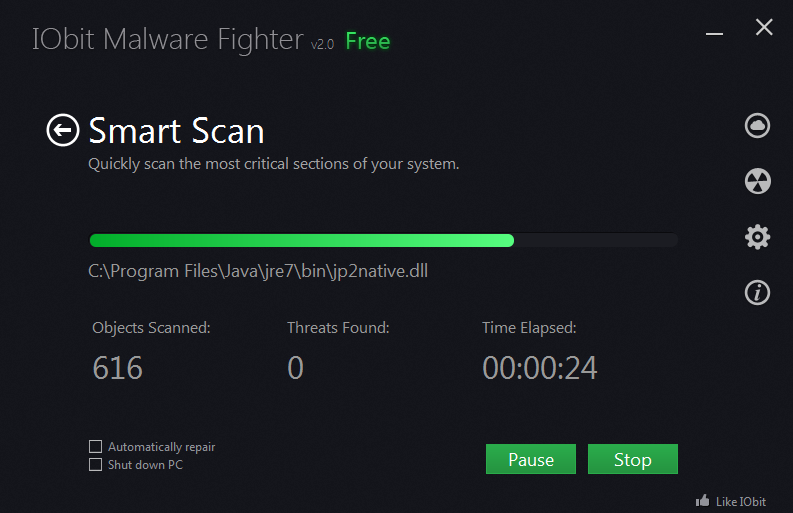 Malware Fighter scans away with nary a hiccup

The scan performance was decent, but there were a few moments when Windows slowed down a bit during regular usage of the desktop. Looking beyond the local scanning capability, if you have a particular file that you might be especially suspicious of and want to give it a more thorough analysis, there is a cloud upload feature where you can send any file of your choosing to IObit's server farm for additional checks. Community-flagged files also build a rather nice list that the scanner can go by for painting an accurate picture of what is being dealt with. 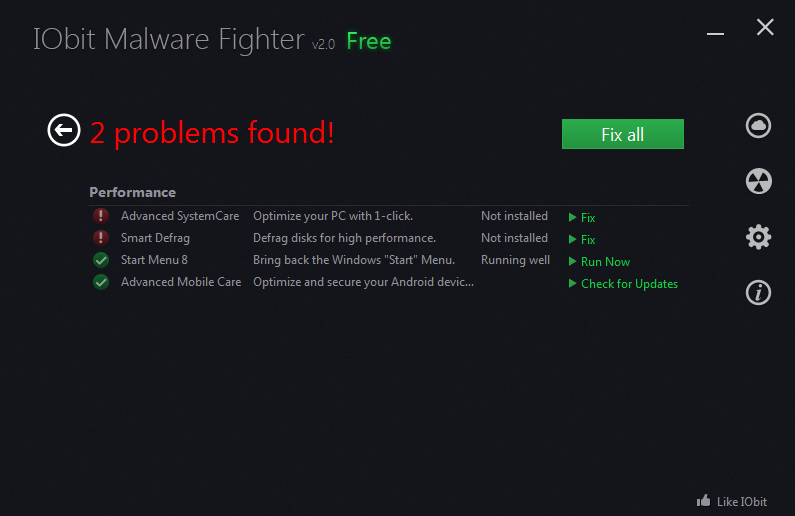 Extra goodies are in store for you

IObit decided to throw in an extra feature called the "Performance" section, which honestly isn't so much a real performance boost area as it is a mere collection of links to downloads of other IObit software products. The only ones that really appeared to be worthwhile were Start Menu 8 (a free tool which is designed to re-implement the Start Menu on Windows 8 classic desktop mode) and the Smart Defrag tool.

In my opinion, calling it a performance area though might be slightly disingenuous on IObit's part as it would probably be best called an "Extras" section instead, since the additional software isn't necessarily going to make your PC run like a rocket ship.

As a whole, Malware Fighter itself is a rather decent anti-malware product that can effectively scrub various bits of nasty executable code from your system as well as give your anti-virus an extra booster shot. If you are looking to have priority support and more frequent background malware definition updates, the Pro version can be had for a reasonable price of $19.95. Though, if you are willing to keep tabs on the program manually, the free version is effectively just as good from a scan quality perspective.