Jitsi lets you audio and video conference on your terms using your own private SIP server or any SIP service.

Clearly, Skype is the world's most popular voice and video chat client and it supports a wide variety of platforms. But if you are looking for an alternative that affords you privacy and more control, Jitsi is the answer. Touted by security conscious netizens like the Tor Project's own Jacob Appelbaum as an ideal alternative to proprietary software like Skype, Jitsi lets you audio and video conference on your terms using your own private Session Initiation Protocol (SIP) server or any SIP service. 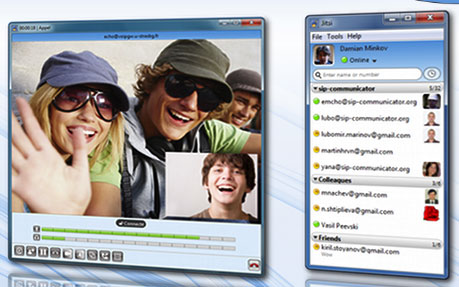 Jitsi is written in Java for cross-platform compatibility with other operating systems. Although this can translate into a slightly sluggish experience and a rather bland user interface, the software is remarkably flexible in its own right. In addition to supporting traditional SIP for online communications, Google Talk's protocol (XMPP) is also supported out of the box for audio and video chats as well as AIM, ICQ, Facebook, Yahoo and MSN. Jitsi also provides a means to encrypt VoIP traffic using SRTP or ZRTP encryption methods, which is something Skype doesn't provide and is a rarity amongst most SIP / VoIP clients today.

With the emergence of IPv6 connectivity, Jitsi is capable of initiating direct connect VoIP sessions, simply by providing the appropriate IPv6 address of the machine to connect to. For anyone behind NAT on a home router using IPv4 connections, tunnel brokers that provide IPv4 to IPv6 address translation can be used to get around pesky limitations imposed by NAT. Basically, this means that anyone from outside your network will typically have no problem reaching you.

As far as downsides go, the only issue I see with Jitsi, at least on the SIP side of the equation, is that SIP isn't nearly as commonplace as something like Skype and it may require additional VoIP configuration knowhow. With XMPP support available, at least Jitsi users can leverage their Google contacts right out of the box and get an experience similar to a more traditional SIP setup. Obviously though, Google will have access to your conversation data, whereby setting up a true SIP session gives you more control over your privacy.

For what it's worth, Jitsi is a fairly decent VoIP and chat client. Though not as shiny looking as its proprietary competitor Skype, Jitsi is still worth giving a try. It's free and if you don't have a resource-constrained system, the software should suit your online communication needs fairly nicely. Just be sure that you have the latest version of Oracle's Java Runtime Environment for best results. With Microsoft taking control of Skype and casting doubt on its future as a cross-platform service as well as the possibility of a programmed "back door" into the network, Jitsi could potentially fill the void nicely as an eventual replacement.