Ultra Hal Digital Assistant 6.2 is an application for Microsoft Windows that gives the user a 3D interactive character.

Some folks want to give their computers a bit of personality, all the while simplifying general operation. Applications known as "digital assistants" try to fill this role for the desktop PC, much in the same way Siri has done for the latest Apple iPhone.

However, the jury is still out on the effectiveness of virtual assistants, given their rather iffy track record. For instance, many will recall the ill-fated Microsoft Agent technology used in some older Microsoft Office products as nothing more than a nuisance. Clippy anyone? 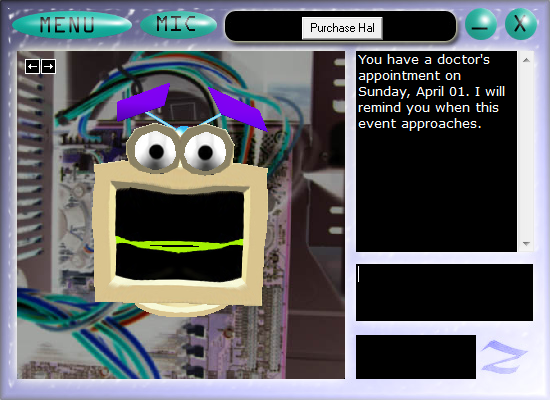 Zabaware, a small software outfit based out of Erie, Pennsylvania, has an interesting approach to the digital assistant phenomenon. Ultra Hal Digital Assistant 6.2 is an application for Microsoft Windows that gives the user a 3D character they can interact with. According to Zabaware, it can carry on simple conversations, mind your dates, open files and webpages, and more.

You can customize your default character and even reprogram the "brain" using VB Script for good measure. As you interact with Hal, it gathers more information and gains intelligence in the process. Though during my short time with the utility, Hal couldn't seem to keep a train of thought and would go off into strange tangents.

When you delve into extra features such as voice recognition for commands, be prepared to spend a great deal of time training the software to recognize your voice. Even then, the success rate for Hal's ability to recognize your voice is not terribly good out of the box using Microsoft's speech recognition engine. For best results, I would strongly recommend using the Dragon NaturallySpeaking engine by Nuance instead, as it tends to have much higher accuracy rates. Unfortunately, Nuance's tech is not cheap, coming in at $99 for the home version.

There's no denying that Ultra Hal Digital Assistant has some cheeky charm to it that would make for an interesting digital assistant utility. But for any serious work, it's probably best to overlook this tool and save your money. Although it can seem like a business-oriented application on the surface, I see it much more as a toy rather than a serious office companion.

For those of you who are curious, Zabaware does offer a 30-day, free trial on their website or you can download it from CNET.