ReadyBoost is a still a part of the Microsoft Windows 7 operating system, so Greg Shultz examines its features in more detail.

The other day a friend and I were talking about the merits of Windows 7, and I was trying to convince him that it was time to let go of Windows XP and move up to the latest version. During our discussion he brought up Windows Vista and ReadyBoost and then asked me if ReadyBoost was even available in Windows 7. When I told him that it was indeed still a part of the Windows 7 operating system, he questioned whether it was really necessary anymore, considering the fact that 2GB-4GB of RAM was pretty common in new PCs these days.

That got me wondering. During the Vista buildup, ReadyBoost was a pretty common topic of discussion. Back then, memory was still pretty expensive and ReadyBoost was being touted as an inexpensive way to make the new and memory-intensive operating system a little snappier. During the Windows 7 buildup, I really don't remember hearing much about ReadyBoost at all. Do you?

Even so, ReadyBoost is a still a part of the Windows 7 operating system, and as such, I thought that I would examine it in more detail in this edition of the Windows Vista and Windows 7 Report.

Let's begin with a brief overview. As you know, ReadyBoost is designed to use external USB flash drives, SD cards, or CF cards as a hard disk cache to improve disk read performance. For example, when you insert one of these types of devices into a Windows 7 system you'll see an AutoPlay dialog box like the one shown in Figure A. 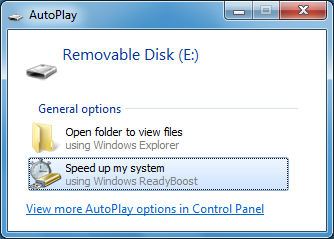 When you insert one of these devices into a Windows 7 system, you'll see this AutoPlay dialog box.

When you select the button Speed Up My System Using Windows ReadyBoost, the operating system will begin a series of tests to determine whether the drive is compatible with ReadyBoost. To be compatible, the device must be:

Since these types of memory devices are inexpensive these days, I recommend that you choose the Dedicate This Device to ReadyBoost option, as shown in Figure B. 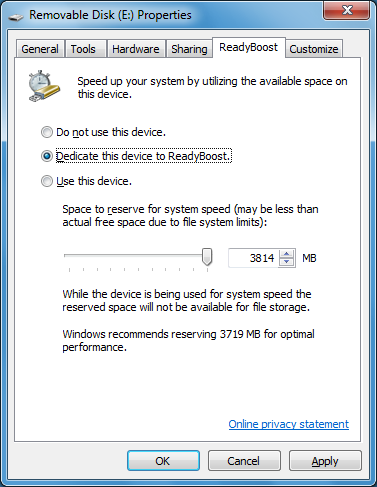 Since these types of memory devices are inexpensive these days, I recommend that you choose the Dedicate This Device to ReadyBoost option.

Once you click OK, ReadyBoost will configure the device to use the cache and immediately begin using it, as shown in Figure C.

Once you click OK, ReadyBoost will configure the device to use the cache.

In order to ensure the safety, integrity, and efficiency of the ReadyBoost system, Microsoft has added several safeguards.

To begin with, the data on device is automatically encrypted using the Advanced Encryption Standard -- AES 128. Therefore, if you happen to lose the device, you won't have to worry about someone getting access to data.

The SuperFetch cache management technology in Windows 7 is designed to enhance the operating system's responsiveness when loading and switching between applications that you use most often. Using adaptive techniques, SuperFetch will constantly monitor the data and system files related to the applications that you use most often and preload them into the cache where they can be loaded into memory the fastest.

While the SuperFetch cache management technology works perfectly fine while running on your system's main hard disk, it usually works better when it is stored on a flash-based memory device using the ReadyBoost system. This is because a hard disk relies on physically moving components, which makes it inherently slow when compared to flash memory with its very fast, electronic data transfer system.

Does it really work in Windows 7?

OK, now that you have a pretty good idea of how the ReadyBoost system works, let's take a look at how effective it is in Windows 7 along with today's technology.

To begin with it is important to point out that if you have a high-end hard disk in a desktop system that is pushing 7200-RPM or higher, ReadyBoost won't provide as significant of a performance gain as it would if your hard disk is running 5400-RPM or lower, such as those typically found in laptops. However, even if you are on the top end of the scale, that doesn't mean that you should write off ReadyBoost.

Once ReadyBoost is enabled, it doesn't just take over. Rather, it essentially keeps tabs on hard disk operations and will only go into action reading and delivering files from its cache when doing so will boost performance. Otherwise, it defers to the cache on your hard disk. More specifically, during sequential read operations, a hard disk will outperform a flash-based drive; during nonsequential read operations, a flash-based drive, and subsequently ReadyBoost, will outperform a hard disk.

It's also important to understand that recognizing the performance gain provided by using ReadyBoost is pretty subjective and will depend on what kind of applications you run on your computer and what type of data you typically work with.

I'll follow up on this performance issue in next week's blog, so stay tuned.

Windows 7 ReadyBoost can employ multiple devices. In fact, Windows 7's ReadyBoost can support up to eight devices for a maximum 256GB of cache memory.

Have you used ReadyBoost? If so, do you feel like it boosts overall performance? As always, if you have comments or information to share about this topic, please take a moment to drop by the TechRepublic Community Forums and let us hear from you.