Microsoft has put the Choice command back in Windows Vista and made it a bit more powerful. Since the Choice command can come in extremely handy in a lot of situations and because it has been absent so long, Greg Shultz thought it would be worthwhile to revisit this command.

While I use VBScript and Windows Scripting Host quite a bit, I've always been a big fan of batch files! There are just so many system administration tasks that you can accomplish using command line tools and I love being able to combine them in a batch file. Over the years, I've written literally thousands of batch files that perform all sorts of tasks.

While a lot of my batch files just simply run a series of commands from start to finish, some need to prompt a user to make a choice in order to determine which direction the batch file should take. Back in the olden days, getting input from a user in a batch file was next to impossible. But then when Microsoft introduced DOS 6.0 in the early 1990's, they included a new batch file command called Choice, which was designed to give you the ability to make your batch files interactive. At the time, this new feature singlehandedly revolutionized batch files. Once I got used to using the Choice command, I used it every chance I got.

Well, I recently discovered that Microsoft put the Choice command back in Windows Vista and made it a bit more powerful. Since the Choice command can come in extremely handy in a lot of situations and because it has been absent so long, I thought it would be worthwhile to revisit this command.

In this edition of the Windows Vista Report, I'll examine the Choice command. As I do, I'll show you some examples of situations where it can come in handy.

This blog post is also available in the PDF format in a TechRepublic Download, which includes the example batch file shown in Figure A.

Looking at the Choice command

If you type this in a Command Prompt window and press [Enter], you'll see the following prompt

With this basic explanation in mind, let's take a look at a more complete example:

As you know, troubleshooting and diagnosing TCP/IP problems on a Windows network can be a bear of a job. However, the task can be easier if use the IP Configuration (IPConfig) command, which is designed to provide you with detailed information on a Windows system's TCP/IP network configuration. This information can be used to help verifying network connections and settings and along with other TCP/IP tools can assist you in solving TCP/IP problems on a Windows network.

Unfortunately, there are so many IPConfig command parameters and many of them are quite long, that remembering them, much less typing them accurately, can be a bear of a job in and of itself. To make using the IPConfig command in Windows Vista a bit easier to use, I've created the batch file shown in Figure A. (The batch file in Figure A is available in the download version of this blog post.) 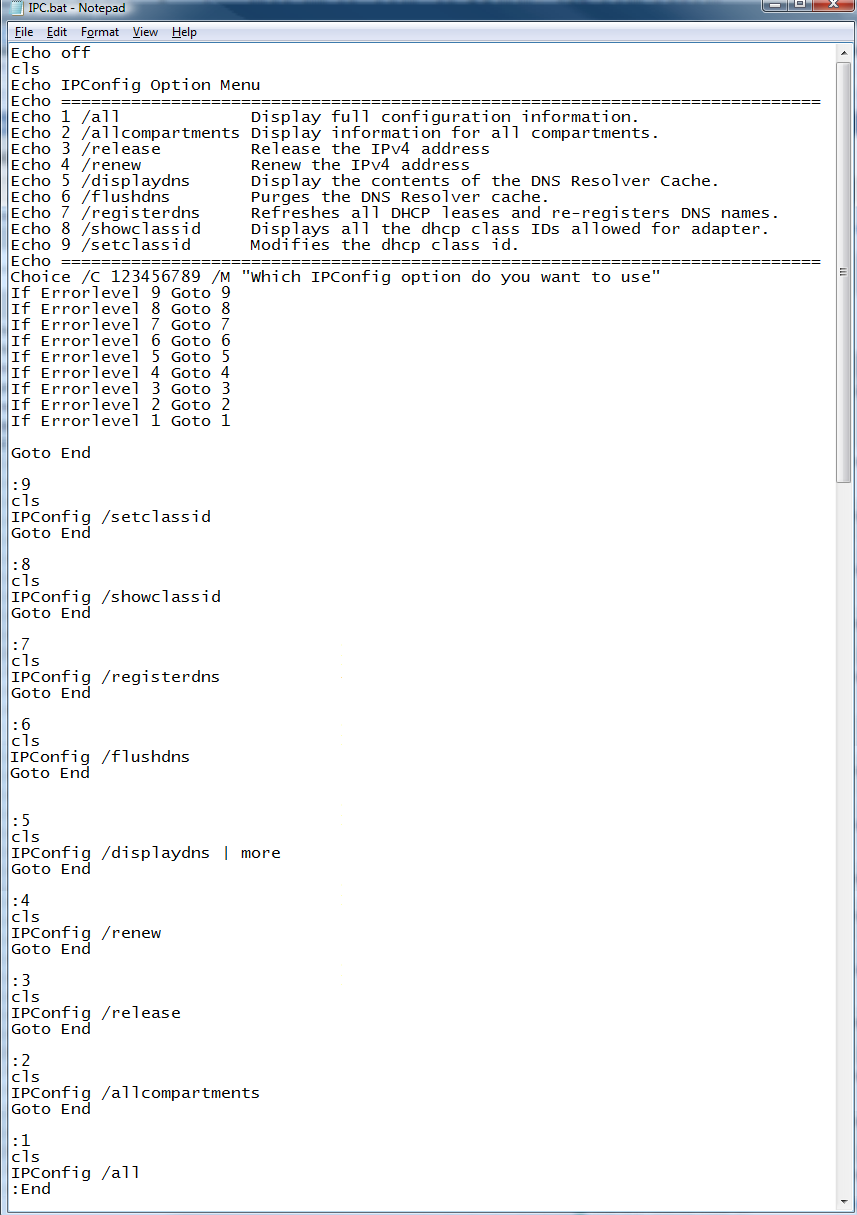 When you run it by typing IPC, this batch file displays a nice menu, as shown in Figure B. Using the Choice command allows you to easily select and run the most common IPConfig command lines. You just type a number and the command runs. 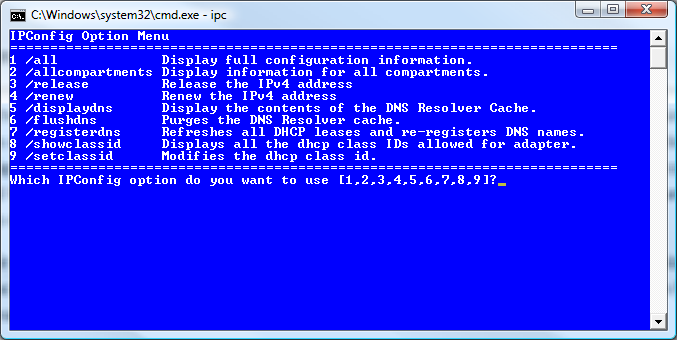 Once the menu displays, you just type a number and the appropriate IPConfig command line runs.

Will the Choice command become part of your toolset?

Do you create and use batch files? Now that the Choice command is back, will you make use of it? Will you download and use the IPC.bat file? Please drop by the Discussion Area and let us hear from you.