Microsoft Windows has been around longer than Mark Zuckerberg, and we have the splash screens to prove it.

Quick question: In what year was Microsoft Windows 1.01 released? Here's a hint: Vinyl was still the material of choice for recorded music.

If you said 1985, you are correct. That's right, we are approaching the 30th anniversary of Microsoft Windows. I doubt anyone using Windows 1.0 back then would have made the bet that Windows would be the dominate operating system for personal computers in 2011.

I started to reminisce about the long string of Microsoft Windows versions and remembered that Greg Shultz put together a gallery of all the Windows splash screens throughout the years. As a DOS batch file master, I shunned the first few versions of Windows in favor of the old command-line way of doing things. My first Windows version was 3.0.

However, in many ways, using Windows 3.0 qualified you as an early adopter. I remember working for a company in the early 1990s that purchased brand-new PCs running Windows 3.11 for Workgroups. The first thing the employees did every morning was open the command prompt -- essentially we ignored the GUI. That is, except for me -- I eventually convinced my bosses that the work we were doing could be done more efficiently if we used this Windows stuff instead of a DOS prompt.

Seeing the Windows 3.11 splash screen in Greg's gallery awakened those memories. To show what a different time it is we live in, consider that Windows 8 may not have a splash screen at all because it takes only about 10 seconds to load. Change really is the only constant. 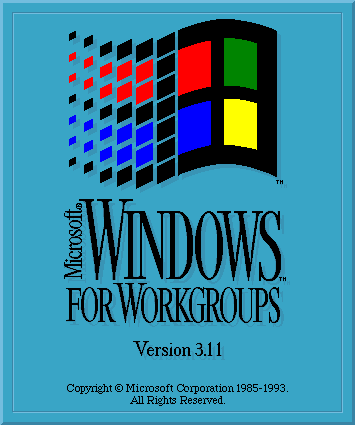