Greg Shultz shows you how to use the built-in Driver Verifier Manager to troubleshoot driver problems in Microsoft Windows 7.

In a recent blog post titled "Troubleshoot Windows 7 Drivers in More Detail with Driverquery," I told you about Driverquery and how you can use it to gather detailed information about all the device drivers installed on your system. Well, in addition to DriverQuery there is another tool called Driver Verifier Manager that you can use as a troubleshooting aid when you suspect that your problems may be rooted in a faulty device driver.

For instance, if you occasionally encounter unpredictable errors, lockups, or BSODs, there's a good chance that your system is suffering from the effects of a faulty third-party driver. The device drivers that come with Windows 7 have a Microsoft digital signature that indicates that the driver has met a certain level of testing and that it has not been altered. Any hardware that carries a Certified for Windows 7 logo will come with drivers that have a digital signature from Microsoft, which indicates that the product was tested for compatibility with Windows 7.

However, not all third-party hardware manufacturers are willing to take the time and effort to submit their products to Microsoft for certified testing, and as such they aren't really interested in having a digital signature from Microsoft assigned to their drivers. And, unfortunately, uncertified drivers can be a source of problems.

In this edition of the Windows Desktop Report, I'll show you how to use the built-in Driver Verifier Manager to troubleshoot driver problems in Windows 7.

Once enabled, the Driver Verifier Manager will go to work in the background and will essentially perform a series of extreme stress tests on the selected driver(s) in an attempt to cause the driver(s) to fail. Keep in mind that the tests that Driver Verifier Manager performs will occur as you use your system over time under normal circumstances. As such, it may take some time to identify a problem, if there is one at all. In other words, this utility will not yield immediate results.

If the driver does fail, it will cause a BSOD and a Stop Error message that will contain information that you can use to determine and eliminate the problematic driver. If, after a few days, the driver doesn't fail and cause a BSOD, then the driver may not be the cause of the problem. Either way, you will have to disable the Driver Verifier Manager once you are done troubleshooting. 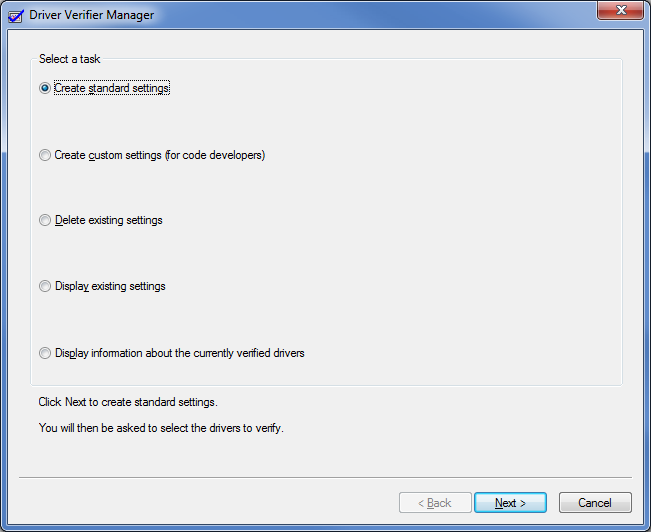 The Driver Verifier Manager runs from a wizard-based user interface.

As you can see, the Create Standard Settings option is selected by default, and in most cases this option is the best way to start. When you use this option, the Driver Verifier Manager selects a standard set of driver verification options.

If you later decide that you want to perform more specific tests, you can select the Create Custom Settings option. When you do, the Driver Verifier Manager will display all the available driver verification options and allow you to select the ones that you want to employ. This option is really designed for developers.

As I mentioned, you will have to disable the Driver Verifier Manager once you are done troubleshooting. To do so, you'll use the Delete Existing Settings option.

As its name implies, selecting the Display Existing Settings option will show the driver verification options that have been activated and will list the drivers being tested.

Since the Create Standard Settings option is the most common way that you'll use the Driver Verifier Manager, I'll cover this option. When you click next, you'll be prompted to select the drivers that you want to test, as shown in Figure B. 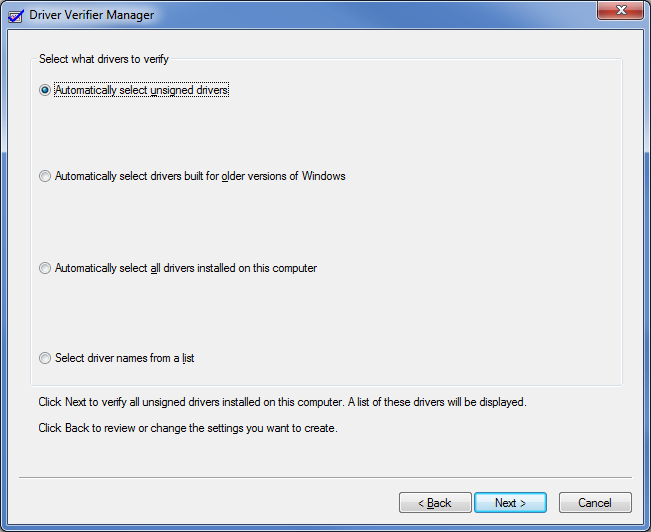 The Driver Verifier Manager provides you with several options for choosing which driver you want to test.

Since unsigned drivers are the most likely culprit, the Automatically Select Unsigned Drivers option is selected by default. If you select this option and click Next, you'll see only those drivers installed on your system that are not digitally signed by Microsoft. If there aren't any unsigned drivers, an error message will appear.

If you suspect that signed drivers designed for a previous version of Windows may be installed on your system and causing problems, select the Automatically Select Drivers Built for Older Versions of Windows option. If you select this option and click Next, you'll see a list of drivers that are digitally signed by Microsoft but are designed for previous version of Windows -- most likely Windows XP. If there aren't any signed drivers for older version, an error message will appear.

While not really a very sensible option when it comes to standard troubleshooting practice, you can select the Automatically Select All Drivers Installed on This Computer option. If you select this option, the Next button will change to Finish and you'll be prompted to reboot your system. (As a general rule of thumb, it is better to troubleshoot a single or a small set of possible problem drivers as it will be easier to determine the cause.)

If you want to see all the drivers installed on the system and be able to pick and choose which ones to test, choose the Select Driver Names from a List option.

On my test system, I selected the default option, Automatically Select Unsigned Drivers, and clicked Next. I then saw a small list of the drivers installed on my system that were not digitally signed by Microsoft, as shown in Figure C. To initiate the testing, I clicked Finish and was prompted to restart my system. 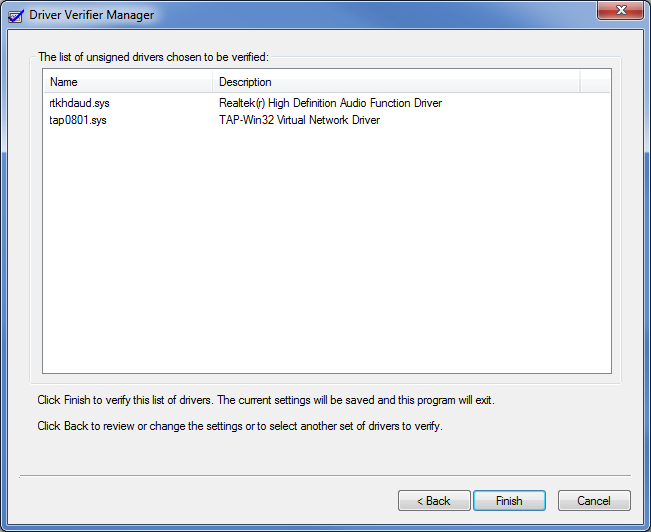 In the case of my test system, two drivers were unsigned.

It's been several days, and I have yet to encounter a response from the Driver Verifier Manager. I suppose that it isn't really surprising since I wasn't encountering any unpredictable problems on this system. However, I am in the process of seeking more current drivers.